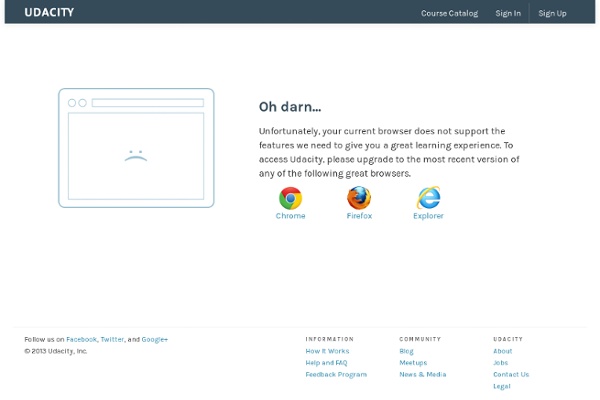 Exercise Physiology: Understanding the Athlete Within About the Course This course examines the physiological responses to acute and chronic exercise, with a focus on skeletal muscle, energy metabolism, the oxygen transport system and temperature and fluid balance. The factors that limit exercise performance will be reviewed and the role of genes in determining athletic performance will be considered. At the end of this course, you should have a better understanding of the athlete within! Website Launch Checklist: 25 Things to Test Before Your Site Goes Live Launching a website is a little like making homemade soup. You’ve got many ingredients coming together, and before you’re done adding them, you sample it to see that you got it just right. But this step – the testing – is often ignored before a site goes live. Testing a new website can seem overwhelming. Teams aren’t sure where to start.

Data analytics: Tips for entering the field Data analytics is a hot and happening field. Here are some tips from a data analyst for how to get started in the field. Grace Simrall is a data analyst and founder of iGlass Analytics, where she helps companies in a wide variety of verticals (healthcare, retail, finance) achieve their Business Intelligence goals. I asked Grace what she would recommend someone do if he or she were interested in the field of data analysis. She said she thought it was too soon to tell the value of certification or master's degree programs in analytics and that it was probably a good idea to actually try out the work before investing in a degree.

Free Classes. Awesome Instructors. Inspiring Community. When does the course begin? This class is self paced. You can begin whenever you like and then follow your own pace. It’s a good idea to set goals for yourself to make sure you stick with the course. How long will the course be available? This class will always be available! Introductory Human Physiology The goal of this course is to provide an introduction to human physiology. The students learn to recognize and explain the basic concepts that govern each organ and organ system and their integration to maintain homeostasis, as well as some clinical aspects of failure of these systems. The organ systems covered include: nervous, muscle, cardiovascular, respiratory, endocrine, male and female reproductive, gastrointestinal, and urinary. This human physiology course is targeted to undergraduate and graduate students with an elementary background in biology. In a typical undergraduate setting, this course would fulfill requirements for students applying to professional health science programs such as medical school, nursing, physician assistant, pathologists’ assistant, physical therapy, and doctorate of physical therapy.

The ultimate guide to startup pre-launch marketing in 5 simple steps Successful CMOs achieve growth by leveraging technology. Join us for GrowthBeat Summit on June 1-2 in Boston, where we'll discuss how to merge creativity with technology to drive growth. Space is limited. Request your personal invitation here! Lessons on Winning and Profitability from Jack Welch Jack Welch is one of the most prominent CEOs of the last century. He has earned name recognition from people around the world. For the uninitiated, Jack Welch is the former CEO of General Electric. He assumed the role in 1981 and remained in the position until his retirement in 2001. Tips for entering the field of data analytics Data analytics is a hot and happening field. Here are some tips for getting your foot in the door. One of our guest speakers at this year's TechRepublic Event was Grace Simrall, a data analyst at iGlass Analytics, where she helps companies in a wide variety of verticals (healthcare, retail, finance) achieve their Business Intelligence goals. I asked Grace what she would recommend someone do if he or she were interested in the field of data analysis.

Data Science Learning Resources The surge in popularity of the notion of big data has already made the term prone to some major backlash. But despite many tech pundits dismissing big data as little more than a buzzword, it appears that the labor market is indicating that talented people with a facility for handling data are continuing to be highly in demand, and this demand appears to be growing. Data science is a new field, one that has risen to prominence with all the attention to big data. In its nascence, it is still finding its place among other sciences, which creates challenges as data scientists tend to find their work crosses a number of disciplines. Data science requires work in computer science, statistics, mathematics and a level of creativity that is not often seen in related fields.

Take Stanford's AI Course For Free Online Not too long ago we told you about how you can access the course materials for Stanford University's introduction to computer science course. If you're looking for something a bit more advanced, Stanford will offer its artificial intelligence class online for free this fall. It will run from Sept 26 - Dec 16. Online enrollment ends Sept 10. The course will be taught by Sebastian Thrun and Peter Norvig. The course will include online lectures by the two, and according to the course website both professors will be available for online discussions.