No Estimates Blogs and Pages

The #NoEstimates Movement Wants To Remove Effort Estimations. The U.S. 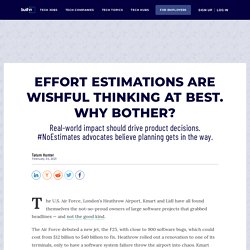 Air Force, London’s Heathrow Airport, Kmart and Lidl have all found themselves the not-so-proud owners of large software projects that grabbed headlines — and not the good kind. The Air Force debuted a new jet, the F25, with close to 900 software bugs, which could cost from $12 billion to $40 billion to fix. Heathrow rolled out a renovation to one of its terminals, only to have a software system failure throw the airport into chaos. Kmart declared bankruptcy after starting and tossing a few supply-chain software projects. And Lidl gave up on a new merchandise-management system after spending about $600 million on its development.

What was the common thread that caused these projects to fail? The answer is obvious, agilist Vasco Duarte told me. A project is defined by its roadmap, or the plan laying out its timelines and components. NoEstimates articles to get you started - Software Development Today. The #NoEstimates hashtag on twitter has caused a whirlwind of discussion about the role of estimates in software development. 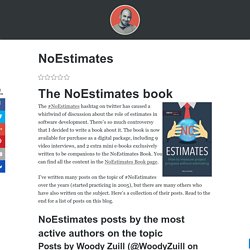 There’s so much controversy that I decided to write a book about it. The book is now available for purchase as a digital package, including 9 video interviews, and 2 extra mini e-books exclusively written to be companions to the NoEstimates Book. You can find all the content in the NoEstimates Book page. I’ve written many posts on the topic of #NoEstimates over the years (started practicing in 2005), but there are many others who have also written on the subject. Here’s a collection of their posts. NoEstimates posts by the most active authors on the topic Posts by Woody Zuill (@WoodyZuill on twitter) No Estimates: Let's Explore the Possibilities - Woody Zuill.

Decision Making Strategies of No Estimates. A recent Harvard Business Review article revealed that one in six IT projects has a cost overrun of 200%. 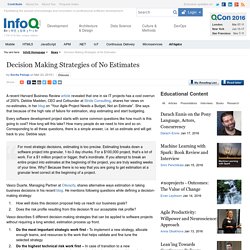 Debbie Madden, CEO and Cofounder at Stride Consulting, shares her views on no-estimates, in her blog on “Your Agile Project Needs a Budget, Not an Estimate”. She says that because of the high rate of failure for estimation, stop estimating and start budgeting. Every software development project starts with some common questions like how much is this going to cost? The #NoEstimates Movement. 'No Estimates: Let's Explore the Possibilities' by Woody Zuill. Free people search and contact details for Roy L Zuill. 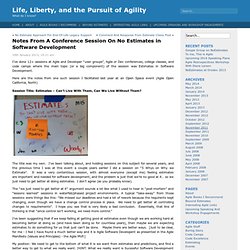 Here are the notes from one such session I facilitated last year at an Open Space event (Agile Open California, North) .NET Rocks! Carl and Richard try something new - doing a mob style interview about mob programming! 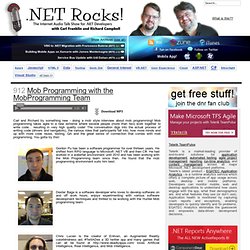 Mob programming takes agile to a new extreme where several people (more than two) work together to write code... resulting in very high quality code! The conversation digs into the actual process of writing code (drivers and navigators), the various roles that participants fall into, how more minds end up with more code reuse, testing, QA and the great sense of connection that comes with mob programming. You gotta try this! Gordon Pu has been a software programmer for over thirteen years. He shifted from RPG language to Microsoft .NET VB and then C#. How does the mob get away with no estimates? « Mob Programming.

How much do you estimate to get across? 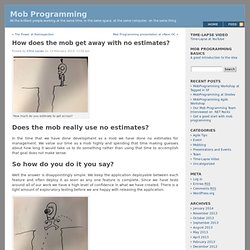 Does the mob really use no estimates? In the time that we have done development as a mob we have done no estimates for management. We value our time as a mob highly and spending that time making guesses about how long it would take us to do something rather than using that time to accomplish that goal does not make sense. So how do you do it you say? Well the answer is disappointingly simple. Making estimated will leave you falling short… Life, Liberty, and the Pursuit of Agility » Blog Archive » Agile2013 Lightning Talk: NoEstimates. NOTE: This was a lightning talk proposal for Agile 2013 in Nashville. 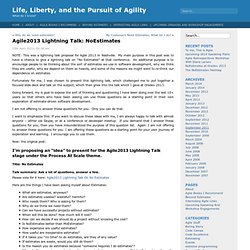 My main purpose in this post was to have a chance to give a lightning talk on “No Estimates” at that conference. An additional purpose is to encourage people to be thinking about the sort of estimates we use in software development, why we think they are useful, why we depend on them so heavily, and some of the reasons we might want to re-think our dependence on estimates. Fortunately for me, I was chosen to present this lightning talk, which challenged me to put together a focused slide deck and talk on the subject, which then grew into the talk which I gave at Oredev 2013. Going forward, my is goal to expose the sort of thinking and questioning I have been doing over the last 10+ years so that others who have been asking can use these questions as a starting point in their own exploration of estimate-driven software development.

I am not offering to answer these questions for you. Woody Zuill on Mob Programming and No Estimates. 3. 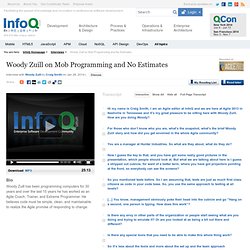 You are a manager at Hunter Industries. So what are they about, what do they do? Yeah. So Hunter makes sprinklers and they are sort of the … I would say, they are very innovative in what they do and they have a very high quality standard, so it’s a wonderful place to work. They really understand the idea that we need to do quality work. Craig: So, one of the presentations that you have been giving here, in fact I first came across the mob programming, as you call it, at an Open Space session at last years conference. Yeah, so the basic idea is that pair programming keeps two eyes on the code at all times and increases the ability to communicate to each other about the code. Craig: That’s the key, right? Yeah, that’s correct. 4. Yes, so basically to make this work, everybody has got to be looking at the same screen, and when you are working in mob programming, that really means you need to project them, or have some huge monitors. 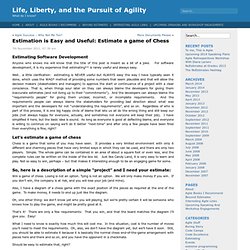 For software development, it is my experience that estimating** is rarely useful and always easy. Well… a little clarification: estimating is NEVER useful but ALWAYS easy the way I have typically seen it done, which uses the WAG* method of providing some numbers that seem plausible and that will allow the decision makers (stakeholders and managers) to approve the start or continuance of a project with a clear conscience. That is, when things sour later on they can always blame the developers for giving them inaccurate estimates (and not living up to their “commitments”).

And the developers can always blame the “requirements people” for giving them unclear, incorrect, or incomplete requirements. Let’s estimate a game of chess.