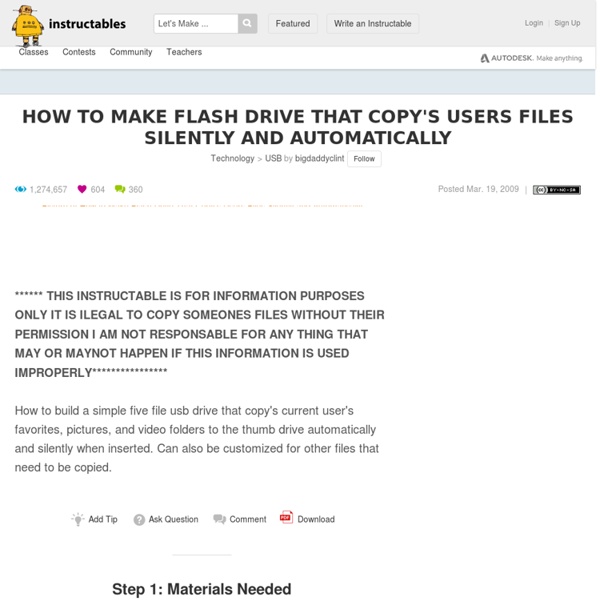 Ok there is no order in the file creation process just that you have all files created and on the flash drive. I will start out with the autorun.inf. This file is used when you insert the flash drive into said computer. Also used to change the thumb drive icon to something more acceptable for social engineering. Here is the code, you will have to open a simple word editor such as word, you can past this code into word and edit to your hearts content. [autorun] icon=drive.icoopen=launch.bataction=Click ok to Run game for Windowsshell\open\command=launch.bat a couple of notes the code is between the lines not the lines at all so dont put them in your autorun file. also when you save this file after editing or pasing this in the editor make shure you save it as all files and put a .inf after it... like this autorun.inf look at pic two if you have any issues. You can change the icon to your tastes what you will have to do is find a .png a png file is an icon file.

www.lib.utexas.edu/thermodex/ Select PROPERTIES you are looking for: About ThermoDex | List of Titles Indexed | Finding Thermodynamic Infomation (Guide) | Library Catalog ThermoDex contains records for selected printed and web-based compilations of thermochemical and thermophysical data for chemical compounds and other substances. You can select one or more compound types and link them to one or more property terms, and ThermoDex will return a list of handbooks that could contain these data. Due to copyright and technical considerations, the actual data are not contained in ThermoDex. To use ThermoDex, select multiple properties in the options list on your left, and click Search. Welcome to the new ThermoDex! ThermoDex 4.0 Beta is in the process of an upgrade.

How to Bypass or Remove a BIOS Password | Technibble A BIOS password is a protection measure that can be used to stop someone powering up a computer system or making changes in some of the computers most sensitive areas. Many big name computer manufacturers such as Dell and HP lock the customers out of this area because they don’t want the customer changing anything and potentially damaging the machine (which the manufacturer may have to warranty). However, when someone like a computer technician or hardware enthusiast needs to make some hardware changes to the computer, they will need to access the BIOS. Here are some methods to be a bios password cracker, removing a BIOS password. How to Bypass or Remove a BIOS Password by Removing the CMOS Battery: The simplest way to remove a BIOS password is to simply remove the CMOS battery. Anyway, open up the computer case using a screw driver and locate the flat, circular and metallic CMOS battery. Once you have located it, observe how the latches are holding it. To start using ! Download !

Katamari Hack Sony Nextep Computer Concept for 2020 by Hiromi Kiriki In 2020 We Can Wear Sony Computers On Our Wrist Our present need for internet connectivity is so profound that secondary devices like the Nextep Computer are bound to happen. Developed to be worn as a bracelet, this computer concept is constructed out of a flexible OLED touchscreen. Earmarked for the year 2020, features like a holographic projector (for screen), pull-out extra keyboard panels and social networking compatibility, make the concept plausible. Ten years from now is not too far away, so how many of you think we’d be buying such gadgets? Designer: Hiromi Kiriki