British Lung Foundation. England: There were higher rates of emergency admission in the North East, North West, Yorkshire and the Humber and the West Midlands than in the UK generally. 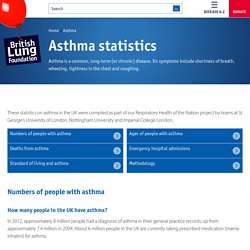 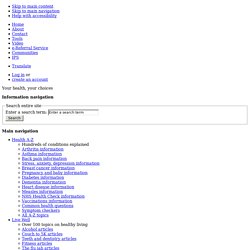 It's often used to help diagnose and monitor asthma. A peak flow test involves blowing as hard as you can into a small, hand-held device called a peak flow meter. These are available on prescription or can be bought from most pharmacies. Why is peak flow measured? By measuring how fast you're able to breathe out, your peak flow score can indicate whether your airways are narrowed. This could be a sign that you have asthma, although other tests such as spirometry will often be needed to confirm the diagnosis. If you've already been diagnosed with asthma, measuring your peak flow regularly can be a useful way of monitoring your condition. Your score can show whether or not your condition is getting worse. 226 Search Results - ALL(ASTHMA) AND LIMIT-TO(yearnav, "2016") AND LIMIT-TO(topics, "patient,asthma") - ScienceDirect. Elsevier: Article Locator. New Directions in Asthma Management: A Tale of Two Cities - Pediatric Allergy: Principles and Practice (Third Edition) - 39. 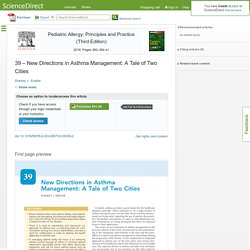 Leung, Stanley J. Szefler, Francisco A. Bonilla, Cezmi A. Akdis and Hugh A. Stanley J. Available online 9 July 2015 9 July 2015. Asthma - Causes. It's not clear exactly what causes asthma, although it is likely to be a combination of factors. 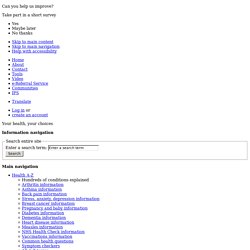 Some of these may be genetic. However, a number of environmental factors are thought to play a role in the development of asthma. These include air pollution, chlorine in swimming pools and modern hygiene standards (known as the "hygiene hypothesis"). Harvard referencing examples tcm44 39847. Human Factors: The art of asking a good question. In Human Factors the art of asking a good question that is non-leading yet to the point, simple yet scenario driven, open yet has boundaries to stop people going off on a tangent, whilst trying to get the user to answer as honestly as possible sounds like a breeze doesn’t it? 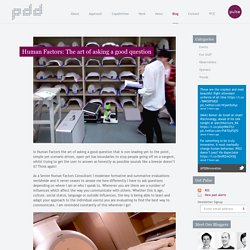 Think again! As a Senior Human Factors Consultant I moderate formative and summative evaluations worldwide and it never ceases to amaze me how differently I have to ask questions depending on where I am or who I speak to. Wherever you are there are a number of influences which affect the way you communicate with others. Whether this is age, culture, social status, language or outside influences, the key is being able to learn and adapt your approach to the individual user(s) you are evaluating to find the best way to communicate. 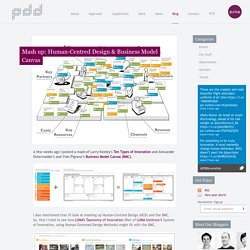 So, I looked at how HCD methods could be combined into method sets and applied to tackle challenges within a specific building block of the BMC, the Customer Segment. So, the challenge I focused on was... First, we need to identify the (right) Customer Segments. Sanofi-Aventis. Alun Wilcox – PDD’s Director of Medical talks to Commissioning Success Julia Dennison writes for Commissioning Success, the magazine on excellence in healthcare. 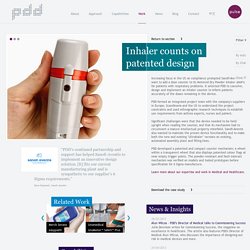 The article also features PDD's Director of Medical Alun Wilcox, who discusses the importance of designing-out risk in medical devices and more. Dry powder inhalers for pulmonary drug delivery. Asthma - Treatment. Long-acting reliever inhalers If your asthma does not respond to initial treatment, the dose of preventer inhaler you take may be increased in agreement with your healthcare team. 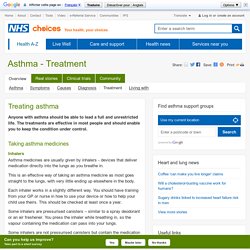 If this does not control your asthma symptoms, you may be given an inhaler containing a medicine called a long-acting reliever (long-acting bronchodilator/long-acting beta2-agonist, or LABA) to take as well. These work in the same way as short-acting relievers. Although they take slightly longer to work, their effects can last for up to 12 hours. This means that taking them regularly twice a day provides 24-hour cover. Asthma deaths report warns complacency is costing lives. People suffering from asthma are dying unnecessarily because of complacency among both medical staff and patients, according to the first national study of asthma deaths in the UK. 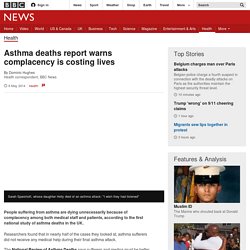 Researchers found that in nearly half of the cases they looked at, asthma sufferers did not receive any medical help during their final asthma attack. The National Review of Asthma Deaths says sufferers and medics must be better at recognising the danger signs. The UK has 5.5 million asthmatics. Chronic obstructive pulmonary disease (COPD) statistics. England: There were higher rates of emergency admission for the North East, the North West and Yorkshire and the Humber compared with the UK generally, with admission rates for females markedly higher in the North East and North West. 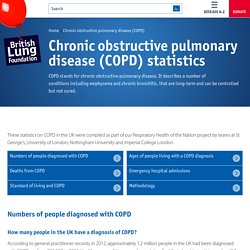