An Overview of Cryptography 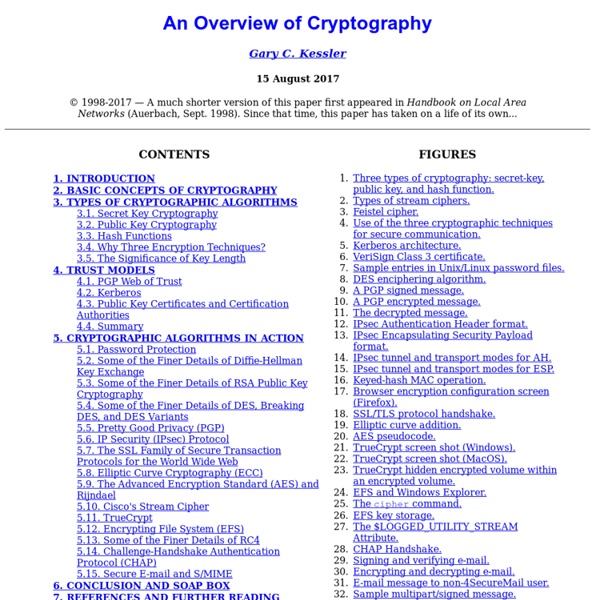 As an aside, the AES selection process managed by NIST was very public. A similar project, the New European Schemes for Signatures, Integrity and Encryption (NESSIE), was designed as an independent project meant to augment the work of NIST by putting out an open call for new cryptographic primitives. NESSIE ran from about 2000-2003. While several new algorithms were found during the NESSIE process, no new stream cipher survived cryptanalysis. As a result, the ECRYPT Stream Cipher Project (eSTREAM) was created, which has approved a number of new stream ciphers for both software and hardware implementation. Similar — but different — is the Japanese Government Cryptography Research and Evaluation Committees (CRYPTREC) efforts to evaluate algorithms submitted for government and industry applications. CAST-128/256: CAST-128, described in Request for Comments (RFC) 2144, is a DES-like substitution-permutation crypto algorithm, employing a 128-bit key operating on a 64-bit block. 3.3.

maps home page Down to: 6th to 15th Centuries | 16th and 19th Centuries | 1901 to World War Two | 1946 to 21st Century The Ancient World ... index of places Aegean Region, to 300 BCE Aegean Region, 185 BCE Africa, 2500 to 1500 BCE - StumbleUpon Perpetual Futility A short history of the search for perpetual motion. by Donald E. Simanek Popular histories too often present perpetual motion machines as "freaks and curiosities" of engineering without telling us just how they were understood at the time. They also fail to inform us that even in the earliest history of science and engineering, many persons were able to see the futility and folly of attempts to achieve perpetual motion. Sometimes a particular device comes to us with a label, such as "Bishop Wilkins' magnetic perpetual motion machine."

Cryptography Visualization Software Downloads New NSF Project This page will be updated soon to include more information and software updates (Updated April 22, 2014 - New Version of VIGvisual) This page has our most recent work in developing a visualization system for an introductory cryptography course. Realtime Visualization Methods in the Demoscene Realtime Visualization Methods in the Demoscene Boris Burger, Ondrej Paulovic, Milos Hasan burger@nextra.sk, twinsen@mayhem.sk, milos.hasan@inmail.sk Department of Computer Graphics and Image Processing Faculty of Mathematics, Physics and Informatics Comenius University Bratislava / Slovakia Abstract This paper introduces a concept of the ''demoscene'' phenomenon arising mainly among the lines of students who share interest in computer graphics and multimedia creations.

2.cs.cmu This book contains 209 tales collected by the brothers Grimm. The exact print source is unknown. The etext appears to be based on the translation by Margaret Hunt called Grimm's Household Tales, but it is not identical to her edition. (Some of the translations are slightly different, the arrangement also differs, and the Grimm's scholarly notes are not included.) The etext received by the Universal Library did not include story titles. They have been restored in this edition, based on Hunt's titles. A new formula for avoiding supermarket queues Supermarket queues are dreaded by many. In the TV series ‘Supernatural’, people standing in an endless queue are used as an example of what hell really looks like. (Photo: Colourbox) In researcher Kebin Zeng’s office hangs a big whiteboard filled with mathematical formulas and functions.

techrepublic There's a lot to know about encryption, and the ins and outs can get confusing. Here's a rundown of what professionals need to know about this fundamental of modern computing. This device is unable to play the requested video. Quantum encryption is about to change everythingQuantum computing could crack contemporary encryption, but might also create nearly-unbreakable new privacy protocols. Data: It's everywhere, and it has to be protected. An Illustrated Guide to Cryptographic Hashes With the recent news of weaknesses in some common security algorithms (MD4, MD5, SHA-0), many are wondering exactly what these things are: They form the underpinning of much of our electronic infrastructure, and in this Guide we'll try to give an overview of what they are and how to understand them in the context of the recent developments. But note: though we're fairly strong on security issues, we are not crypto experts. We've done our best to assemble (digest?) the best available information into this Guide, but we welcome being pointed to the errors of our ways.

Adam Smith, Wealth of Nations, Contents Introduction Chapter 1. Of the Division of Stock Chapter 2. Of Money considered as a particular branch of the general Society, or of the Expense of maintaining the National Capital An App That Encrypts, Shreds, Hashes and Salts The Wickr app. When it comes to mobile apps and social networks, the devil, increasingly, is in the default settings. Companies have little, if any, incentive to let users opt out of services that siphon their personal data back to the advertisers who pay their bills. Nor do companies have any legal mandate to secure users’ personal information with hacker-proof encryption. The responsibility is very much on the user to opt out of services and read through the fine print in privacy policies to understand how their personal data is used, secured and sold. A group of computer security experts want to turn that model on its head with Wickr, a new mobile app that they hope will set a new standard for how personal data is disseminated.

American Indian Stories. American Indian Stories by Zitkala-Sa [aka Gertrude Simmons Bonnin] (1876-1938). Washington: Hayworth Publishing House, 1921. [Page] [Frontispiece] Ham sandwich theorem Not to be confused with the "squeeze theorem" (sometimes called the "sandwich theorem"). Naming[edit] A ham sandwich History[edit] According to Beyer & Zardecki (2004), the earliest known paper about the ham sandwich theorem, specifically the n = 3 case of bisecting three solids with a plane, is by Steinhaus (1938). Federal judge says you can break DRM if you're not doing so to infringe copyright Here's some remarkable news: a judge in a New Orleans-based 5th Circuit Appeals Court has ruled that the Digital Millennium Copyright Act's ban on breaking DRM only applies if you break DRM in order to violate copyright law. This is a complete reversal of earlier rulings across the country (and completely opposite to the approach that the US Trade Representative has demanded from America's trading partners). In the traditional view, DRM is absolutely protected, so that no one is allowed to break it except the DRM maker.

Wisdom and Humor: The Suslick Research Group The Three Laws of Thermodynamics (mathematically precise version) You can't win. You can break even only on a very cold day. It never gets that cold.