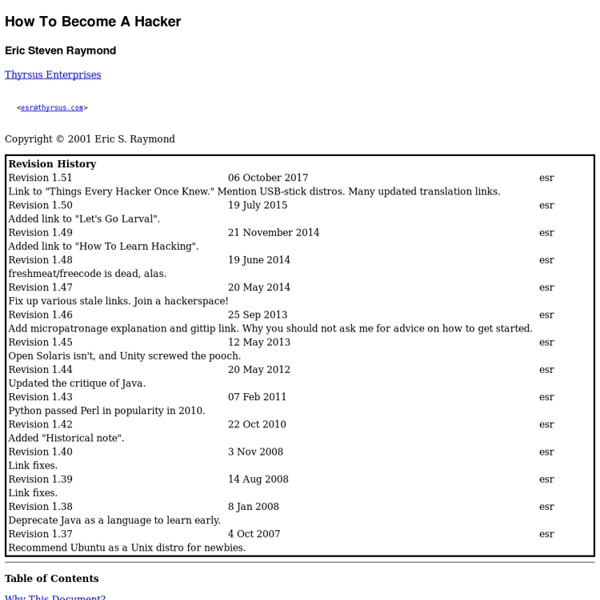 Copyright © 2001 Eric S. Raymond As editor of the Jargon File and author of a few other well-known documents of similar nature, I often get email requests from enthusiastic network newbies asking (in effect) "how can I learn to be a wizardly hacker?". Back in 1996 I noticed that there didn't seem to be any other FAQs or web documents that addressed this vital question, so I started this one. If you are reading a snapshot of this document offline, the current version lives at Note: there is a list of Frequently Asked Questions at the end of this document. Numerous translations of this document are available: ArabicBelorussianBulgarianChinese, Czech. The five-dots-in-nine-squares diagram that decorates this document is called a glider. If you find this document valuable, please support me on Patreon. The hacker mind-set is not confined to this software-hacker culture. The basic difference is this: hackers build things, crackers break them. 1.

The Natives Aren't Restless Enough A couple of points to start with, in the hopes of not wasting readers’ time and preparing for some reactions: This post could be named “Get Off My Lawn” or “In My Day, We Earned It!” or some other title that would demonstrate that I am, more than ever, a cranky old guy now. What follows obviously does not apply to everyone younger than I am (42, for the record). But it does apply to a distressingly large percentage of those who I have taught at the university level (undergraduate and graduate) over the past eight years. This post could be about how slow, feature-less and pathetic the Internet tools and sites I first encountered were compared to the ones we have now, but as we know too well, nostalgia isn’t a selling point. I really enjoyed the data journalism MOOC itself and was glad to see the Poynter write-up. Let’s stipulate up front that the facility with devices thing is very real and very much worth paying attention to, for lots of reasons.

How To Crack A Wi-Fi Network’s WPA Password With Reaver Your Wi-Fi network is your convenient wireless gateway to the internet, and since you’re not keen on sharing your connection with any old hooligan who happens to be walking past your home, you secure your network with a password, right? Knowing, as you might, how easy it is to crack a WEP password, you probably secure your network using the more bulletproof WPA security protocol. Here’s the bad news: A new, free, open-source tool called Reaver exploits a security hole in wireless routers and can crack most routers’ current passwords with relative ease. Here’s how to crack a WPA or WPA2 password, step by step, with Reaver — and how to protect your network against Reaver attacks. In the first section of this post, I’ll walk through the steps required to crack a WPA password using Reaver. First, a quick note: As we remind often remind readers when we discuss topics that appear potentially malicious: Knowledge is power, but power doesn’t mean you should be a jerk, or do anything illegal.

The GNU C Reference Manual The GNU C Reference Manual This is the GNU C reference manual. Preface This is a reference manual for the C programming language as implemented by the GNU Compiler Collection (GCC). Specifically, this manual aims to document: The 1989 ANSI C standard, commonly known as “C89” The 1999 ISO C standard, commonly known as “C99”, to the extent that C99 is implemented by GCC The current state of GNU extensions to standard C This manual describes C89 as its baseline. By default, GCC will compile code as C89 plus GNU-specific extensions. The C language includes a set of preprocessor directives, which are used for things such as macro text replacement, conditional compilation, and file inclusion. Credits Contributors who have helped with writing, editing, proofreading, ideas, typesetting, or administrative details include: Diego Andres Alvarez Marin, Nelson H. Some example programs are based on algorithms in Donald Knuth's The Art of Computer Programming. 1 Lexical Elements tokens . 1.1 Identifiers uU lL \a

Algorithm Flow chart of an algorithm (Euclid's algorithm) for calculating the greatest common divisor (g.c.d.) of two numbers a and b in locations named A and B. The algorithm proceeds by successive subtractions in two loops: IF the test B ≥ A yields "yes" (or true) (more accurately the numberb in location B is greater than or equal to the numbera in location A) THEN, the algorithm specifies B ← B − A (meaning the number b − a replaces the old b). Similarly, IF A > B, THEN A ← A − B. The process terminates when (the contents of) B is 0, yielding the g.c.d. in A. (Algorithm derived from Scott 2009:13; symbols and drawing style from Tausworthe 1977). In mathematics and computer science, an algorithm ( i/ˈælɡərɪðəm/ AL-gə-ri-dhəm) is a step-by-step procedure for calculations. Informal definition[edit] While there is no generally accepted formal definition of "algorithm," an informal definition could be "a set of rules that precisely defines a sequence of operations Formalization[edit]

Kodable Blog about software technologies - PHP, Java, MySQL, etc. Hackers (1995 Building Internet of Things with the Arduino Makers, Hackers and Gamers: Learners and 21st Century Pedagogy Date(s) and Time: October 28, 201302:00 pm - 03:00 pm EST Provided by: Games MOOC Description: This is the opening webinar for the Fall 2014 Games Based Learning MOOC. Archives: Be sure to ask the event organizer for a code to claim your digital badge for this event. Learning Should Be Your Top 2013 New Year’s Resolution As we get closer to the New Year, the ritual of making resolutions begins and we all flock to the usual patterns: we want to eat healthier, work out more, get promoted, or spend more time with our kids and family. These are with no doubt worthwhile goals, but I’d like to pose an important challenge for founders: Make learning and development your key resolution in 2013. If you’re a startup, you are by definition competing with the smartest people in the world – either large companies with more resources than yours or fellow entrepreneurs who are hoping to disrupt large companies. Your knowledge can make the difference between failure and success. Learning a new skill can also increase the chance of serendipity, the “magic” moment when seemingly unrelated concepts form an orignal thought in your head. Considering picking up new skills? Stanford’s Venture Lab 1) Udacity offers a range of free online courses from top University professors. 4) Technical courses from Udemy: Eze Vidra Like this:

5 Great Tools to Teach Coding Every student in every school should have the opportunity to learn computer science. Coding teaches you how to think. Below are resources for kids (and adults) to learn more about the exciting world of coding! Scratch - Developed by MIT, Scratch is one of the best coding sites out there. Blockly - nice tutorials which guide students in the basics of coding. Daisy the Dino - Learn the basics of computer programming with Daisy the Dinosaur! Hopscotch - Using this beautiful, intuitive programming language, kids can unleash their creativity and build their own games, animations and programs. Kodable - Kodable is a free educational iPad game offering a kid-friendly introduction to programming concepts and problem solving. Rate this: i Rate This Like this: Like Loading...