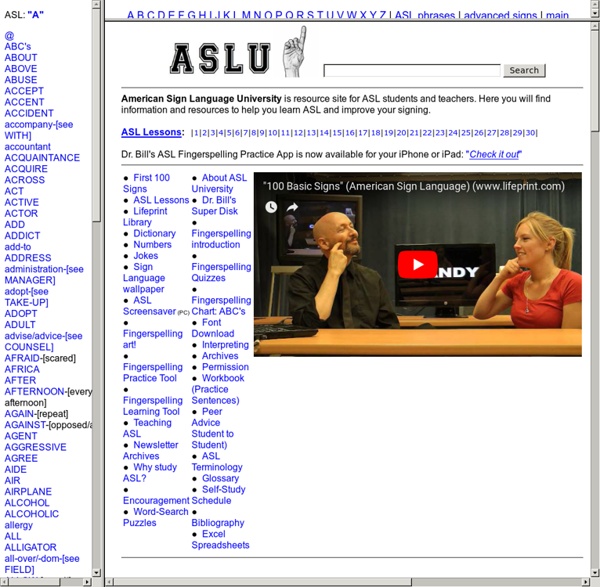 How To Clean Your House in 20 Minutes a Day for 30 Days When I first learned to clean my own place, I thought Saturday had to be an all day clean-a-thon. I didn't really have a concept of how to balance the work load during the week so weekends could be reserved for larger projects or even you know…fun! Now I clean in 20 minutes a day — every day — and things just seem to take care of themselves. Here's a glimpse at the schedule I use! Learn 48 Languages Online for Free How to learn languages for free? This collection features lessons in 48 languages, including Spanish, French, English, Mandarin, Italian, Russian and more. Download audio lessons to your computer or mp3 player and you’re good to go. Amharic Foreign Service Institute Basic Amharic – Audio – TextbookLessons with dialogues, drills, exercises, and narratives will teach you the basics of this language spoken in Ethiopia. Includes samples of speech, explanations of basic language structures, and a variety of practical exercises.

OBEAH AND ORISHA: The Seven African Powers Generally, the most common manifestation of Obeah found today, although maybe not practiced on an individual basis, is blended with Orisha-worship. Orisha is a monotheistic faith brought to the Americas via the slave trade and most commonly associated with Yoruba. The two main fractions of Orisha in the new world are Spiritual Orisha and Baptist Orisha, both of which, on the surface, carry a very heavy Christian ring or appearance about them. Obeah, on the other hand, is NOT a religion in the classical sense. That is to say, there are no meeting places such as churches, mosques, synagogs or other religious buildings or shrines --- or any underlying infastructure replicating such a system. Nor is there any sort of congregation or parishioners, although there are what may be called followers, albeit scattered.

How to Become a Human Calendar Mentally finding out the day of the week for any date is a skill you can easily learn. You don’t need to be an autistic genius – all it takes is basic memorization effort and some trivial math. When I first learned this technique many years ago, I did it just for fun. With time, I learned to enjoy the convenience of not needing a calendar anymore. Meet the Deaf Community Learn American Sign Language Most ASL classes have Deaf instructors. Your instructor can help you get involved in local Deaf events.

Cherubim (Kerubim, Kerubs) The Cherubim were originally the ancient protectors of the Mesopotamian Tree of Life. They were often depicted supporting the thrones of deities and kings.They are closely related to (and often identical to) the sphinx. In the Judeo-Christian tradition, they are the four vast, winged creatures described in the visions of Ezekiel, each winged creature bearing four faces: a lion, a bull, eagle, and human head. Mental Math Mental Math - A Guide to Effective Mental Calculations[edit] Note about Notation: This book generally uses the English/U.S. styles of notation. This includes using commas as a way to divide up the thousands in long numbers (e.g. 32,000 = thirty-two thousand), it will use full stops (periods) as decimal points.