Map projection. More generally, the surfaces of planetary bodies can be mapped even if they are too irregular to be modeled well with a sphere or ellipsoid; see below. 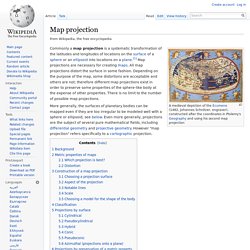 Even more generally, projections are the subject of several pure mathematical fields, including differential geometry and projective geometry. However "map projection" refers specifically to a cartographic projection. Background[edit] Maps can be more useful than globes in many situations: they are more compact and easier to store; they readily accommodate an enormous range of scales; they are viewed easily on computer displays; they can facilitate measuring properties of the terrain being mapped; they can show larger portions of the Earth's surface at once; and they are cheaper to produce and transport. These useful traits of maps motivate the development of map projections. However, Carl Friedrich Gauss's Theorema Egregium proved that a sphere's surface cannot be represented on a plane without distortion. 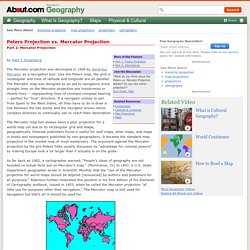 Rosenberg The Mercator projection was developed in 1569 by Gerardus Mercator as a navigation tool. Like the Peters map, the grid is rectangular and lines of latitude and longitude are all parallel. The Mercator map was designed as an aid to navigators since straight lines on the Mercator projection are loxodromes or rhumb lines -- representing lines of constant compass bearing -- perfect for "true" direction. If a navigator wishes to sail from Spain to the West Indies, all they have to do is draw a line between the two points and the navigator knows which compass direction to continually sail to reach their destination. The Mercator map has always been a poor projection for a world map yet due to its rectangular grid and shape, geographically illiterate publishers found it useful for wall maps, atlas maps, and maps in books and newspapers published by non-geographers. Mercator Projection Next page > Alternatives > Page 1, 2, 3 Articles by Date | Articles by Topic. Encyclopedia Britannica. 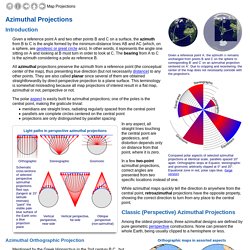 /StockImg/warning36.png" alt=""></td><td>&nbsp;</td><td><em>Since JavaScript is disabled or not supported in your browser, some or all maps in this page will not be displayed. </em></td></tr></table></td></tr></table><br /> Introduction Given a reference point A and two other points B and C on a surface, the azimuth from B to C is the angle formed by the minimum-distance lines AB and AC (which, on a sphere, are geodesic or great circle arcs). In other words, it represents the angle one sitting on A and looking at B must turn in order to look at C. 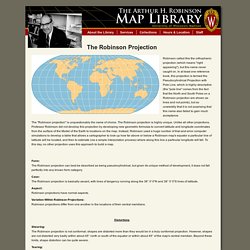 In at least one reference book, this projection is termed the Pseudocylindrical Projection with Pole Line, which is highly descriptive (the "pole line" comes from the fact that the North and South Poles on a Robinson projection are shown as lines and not points), but so unwieldily that it is not surprising that this name also failed to gain much acceptance. The "Robinson projection" is unquestionably the name of choice.

The Robinson projection is highly unique. Unlike all other projections, Professor Robinson did not develop this projection by developing new geometric formulas to convert latitude and longitude coordinates from the surface of the Model of the Earth to locations on the map. Form: The Robinson projection can best be described as being pseudocylindrical, but given its unique method of development, it does not fall perfectly into any known form category. 2(a). Introduction to Maps. Introduction. 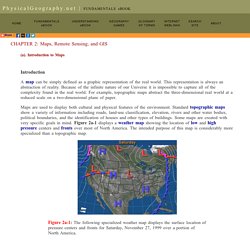 Family Life Today. It does not take too much insight to realize that families today look much different from the way they did just a generation or two ago. 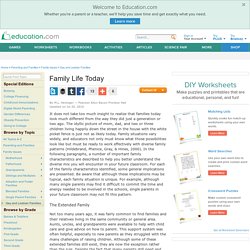 The idyllic picture of mom, dad, and two or three children living happily down the street in the house with the white picket fence is just not as likely today. Family situations vary widely, and educators not only must know what those possibilities look like but must be ready to work effectively with diverse family patterns (Hildebrand, Phenice, Gray, & Hines, 2000). In the following paragraphs, a number of important family characteristics are described to help you better understand the diverse mix you will encounter in your future classroom. For each of the family characteristics identified, some general implications are presented. Be aware that although these implications may be typical, each family situation is unique. The Extended Family Divorce and Single-Parent Families Blended Families Gay and Lesbian Families Two-Career Families Family Mobility.

Psidesarrollo3equipo21 - TEMA 6. Hunt058-download.pdf. How to Make an Amazing Treasure Hunt for Kids: 6 Steps. Edit Article Whether it's too cold to play outside, a birthday party, or just an ordinary day, treasure hunts are a great, fun, and easy way to keep kids entertained. 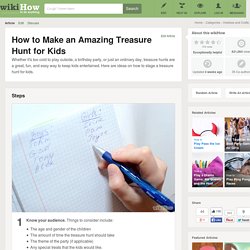 Here are ideas on how to stage a treasure hunt for kids. Ad Steps 1Know your audience. 6Make a great treasure! We could really use your help! Can you tell us aboutwriting? Scavenger hunt. A scavenger hunt is a party game in which the organizers prepare a list defining specific items, which the participants – individuals or teams – seek to gather all items on the list – usually without purchasing them – or perform tasks or take photographs of the items, as specified.[1] The goal is usually to be the first to complete the list, although in a variation on the game players can also be challenged to complete the tasks on the list in the most creative manner. 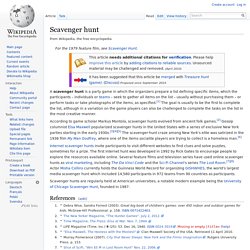 According to game scholar Markus Montola, scavenger hunts evolved from ancient folk games.[2] Gossip columnist Elsa Maxwell popularized scavenger hunts in the United States with a series of exclusive New York parties starting in the early 1930s.[3][4][5] The scavenger-hunt craze among New York's elite was satirized in the 1936 film My Man Godfrey, where one of the items socialite players are trying to collect is a homeless man.[6] Sample.pdf. MEDIA TECHNOLOGY NOT NEUTRAL - Most everyone thinks that media technologies are neutral, meaning that they are mere carriers or conduits for the content. 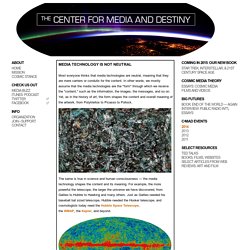 In other words, we mostly assume that the media technologies are the "form" through which we receive the "content," such as the information, the images, the messages, and so on. Yet, as in the history of art, the form shapes the content and overall meaning of the artwork, from Polykleitos to Picasso to Pollock. If it is true that (technological) form shapes content for art and science, then it would seem to be true for human consciousness and destiny. That's why we should realize that media technology is not neutral — as it increases and expands in power, it transforms our view of the cosmos and our place in it, as individuals and as a species. Like art, science, and philosophy, media technology is central to human destiny.