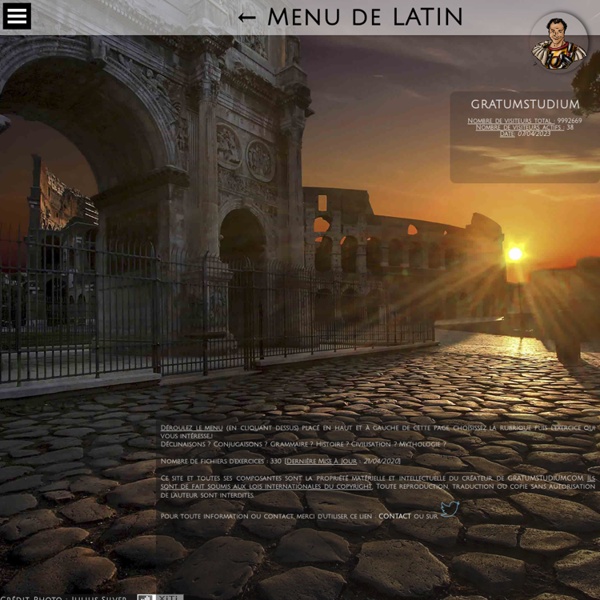 GRASP Method for Acquiring Latin Paedagogica Index GRASP Preface GRASP Handout Go to a sample GRASP text. GRASP stands for GRadual Aggregative Syntactic Praxis. GRASP is a pedagogical method that presents the parts of sentences bit-by-bit, with variety and incremental complexity, to help learners attain the ability to grasp the original text in the order in which it was written, with immediate comprehension. It can be applied to any text, but it is especially helpful when applied to texts of syntactical complexity. GRASP is based upon the insight of some SLA (Second-Language Acquisition) theory that claims that solid language acquisition depends upon a proportionately great quantity of comprehensible input and upon the learners' growing abilities to interpret that input.

Latin umerals Latin Numerals Posted on 25. Feb, 2012 by leire in Latin Language Conversation guide for the Ancient Rome Posted on 24. Oct, 2012 by leire in Latin Language, Roman culture A few years ago, before going on a trip abroad, it was habitual buying a travel guide of the destination which also included some useful phrases or basic expressions to comunicate with locals. Today, these guidelines are being relegated for Internet applications or smartphones, but if you ever have the good fortune to travel to the Ancient Rome, sure this guide will be very useful If you are lucky enough to make beutiful Roman friends – or whatever -: Nomen mihi est xxxx.

How to Write a Love Letter in Latin Posted on 11. Jun, 2014 by Brittany Britanniae in Latin Language Whether you are writing a love letter to a old or new romance, it is always a good idea to “spice” up the normal, same, banal content with something unique to make your significant other feel special. Why not add a little Latin? This post is dedicated to add some Latin to your love life in a love letter (Epistula Amoris). 200 Latin Roots to Improve Your Vocabulary Posted on 09. Apr, 2014 by Brittany Britanniae in Latin Language Whenever learning a new language, students are often overwhelmed by the fact that they must study the grammar and vocabulary. Vocabulary can be tough for anyone, but especially for those learning a new language for the first time or one like Latin which not spoken. However, the vocabulary in Latin should be easier since Latin is integrated into many modern languages: French, Italian, Spanish, English, etc. Here is a wonderful list of the most basic roots any Latin learner should know!

20 Most Popular Movie Quotes Translated into Latin Posted on 28. May, 2014 by Brittany Britanniae in Latin Language When we asked to write a post on popular movies quotes and have them translated into Latin, I was eager to jump at the opportunity. I should note that some quotes are left off my list such as ones from Forest Gump, Harry Potter, Lord of the Rings, and Gone with the Wind. These and other films have already been translated on a previous post of mine which you can find here. I have tried to translate each quote with easy to recognize vocabulary (but you can use this tool here for vocabulary), English word order (Latin usually has the verb at the end and may forgo some words I provided), and if you have questions please feel free to comment or message our Facebook page!

Etymology: Languages that have contributed to English vocabulary over time. In Borrowed Words: A History of Loanwords in English, I examine how words borrowed from different languages have influenced English throughout its history. The above feature summarizes some of the main data from the book, focusing on the 14 sources that have given the most words to English, as reflected by the new and revised entries in the Oxford English Dictionary. Using the date buttons at the top of the graphic, you can compare the impact that different languages have made on English over time. In the "per period" view, you can see the proportions of words coming into English from each source in 50-year slices from 1150 up to the present day. Compare, for instance, how the input from German has grown and then declined again from 1800 to the present day.

Movies, Books, Inspirational Quotes, and Tattoos in Latin Posted on 04. Sep, 2013 by Brittany Britanniae in Latin Language Salvete Omnes, How Do You Say 'Hot Dog' in Latin? REMEMBER your ninth-grade Latin lessons? Here's a test: What is an ''escariorum lavator''? Or a ''birota automataria levis''? conjugate Latin verbs The Latin language was the language of the Roman Empire. Verbix shows the verb inflections of the Classic Latin (CL). From CL, Vulgar Latin (VL) developed. The VL is the base for the today's Romance languages. Books on Ancient Roman Sexuality Posted on 29. Mar, 2011 by kunthra in Uncategorized For some reason we have always been fascinated by ancient Roman sexuality. In previous times, the discussion of ancient Roman sexuality was either covered up or ignored.

L'ablatif absolu: théorie Search temporarily disabled Browse Apps Create App Project: Thesaurus linguae Latinae The foundation of the work is the archive of dictionary slips. The archive is exhaustive for all surviving Latin texts down to the second century of the Christian era. For the later period a selection of examples was made by specialists; this sensible restriction limited the overall quantity of material, which otherwise, by its sheer volume, would have made the work impossible. Each passage containing a particular word is examined with regard to meaning, spelling, prosody and so on, and groups of similar examples are then formed.