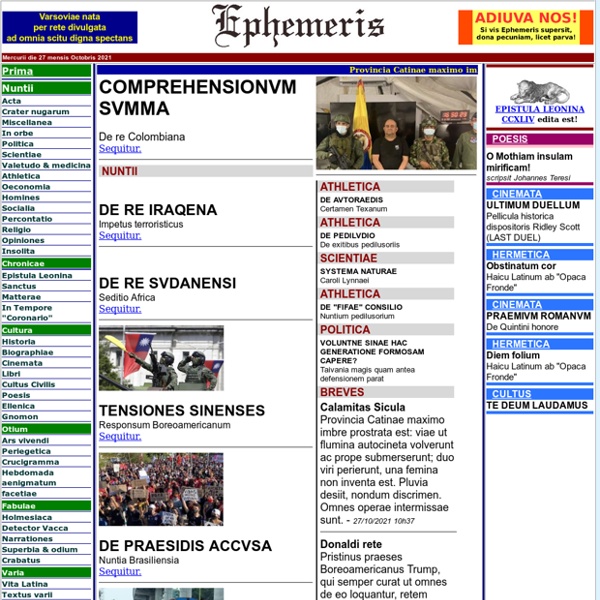 List of Latin translations of modern literature A number of Latin translations of modern literature have been made to bolster interest in the language. The perceived dryness of classical literature is sometimes a major obstacle for achieving fluency in reading Latin, as it discourages students from reading large quantities of text (extensive reading). In his preface to his translation of Robinson Crusoe, F. W. How Do You Say 'Hot Dog' in Latin? REMEMBER your ninth-grade Latin lessons? Here's a test: What is an ''escariorum lavator''? Or a ''birota automataria levis''?

Quel temps fait-il ? (site en anglais) Some of the more common impersonal expressions in Latin are those that describe the weather. grandinat, it’s hailingpluit, it’s rainingningit, it’s snowingfulgurat, there’s a lightning bolt! (A&G have ‘it lightens’)tonat, it thundersrōrat, there’s dew on the grass Note that these verbs can take subjects (Iupitter tonat) but they don’t have to. List of Latin phrases (full) This page lists direct English translations of common Latin phrases. Some of the phrases are themselves translations of Greek phrases, as Greek rhetoric and literature reached its peak centuries before that of ancient Rome. This list is a combination of the twenty divided "List of Latin phrases" pages, for users who have no trouble loading large pages and prefer a single page to scroll or search through. The content of the list cannot be edited here, and is kept automatically in sync with the separate lists through the use of transclusion.

Movies, Books, Inspirational Quotes, and Tattoos in Latin Posted on 04. Sep, 2013 by Brittany Britanniae in Latin Language Salvete Omnes, Books on Ancient Roman Sexuality Posted on 29. Mar, 2011 by kunthra in Uncategorized For some reason we have always been fascinated by ancient Roman sexuality. In previous times, the discussion of ancient Roman sexuality was either covered up or ignored. 20 Most Popular Movie Quotes Translated into Latin Posted on 28. May, 2014 by Brittany Britanniae in Latin Language When we asked to write a post on popular movies quotes and have them translated into Latin, I was eager to jump at the opportunity. I should note that some quotes are left off my list such as ones from Forest Gump, Harry Potter, Lord of the Rings, and Gone with the Wind. These and other films have already been translated on a previous post of mine which you can find here. I have tried to translate each quote with easy to recognize vocabulary (but you can use this tool here for vocabulary), English word order (Latin usually has the verb at the end and may forgo some words I provided), and if you have questions please feel free to comment or message our Facebook page!