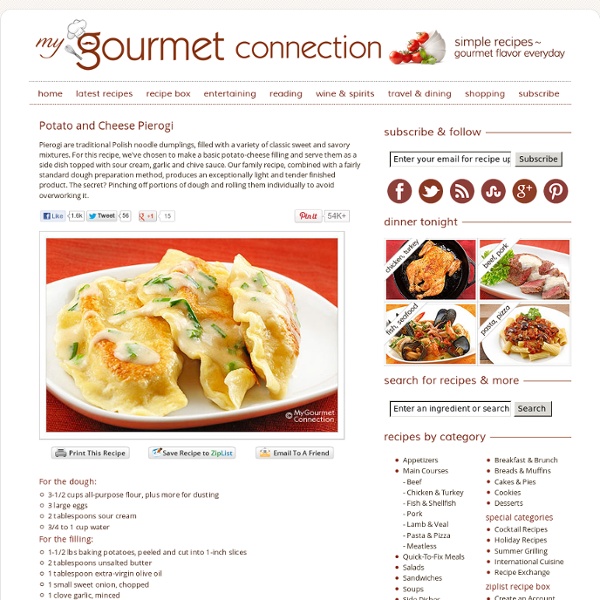 Cooking Momofuku at home October 2, 2010 My mom is obsessed with keeping a stocked freezer, but I guess I don’t really take after her, because my freezer tends to be relatively empty, aside from random containers of stock/ramen broth, frozen dumplings and pierogi. I admit, I store buy frozen chinese dumplings and pierogi for those times that I just don’t feel like cooking. I tell myself it’s because of ease and convenience, but really, I just love the taste of frozen pockets filled with deliciousness.

Cauliflower Crust Pizza I came across this cauliflower crust pizza on Pinterest, and was instantly intrigued. A low-carb pizza? Sign me up! I was skeptical, of course, but curious enough to try it and see how it tasted. I was pleasantly surprised by the results. Now obviously, it is not quite the same as a traditional piece of pizza with soft, chewy crust, but it’s a great substitute when you’re watching your carb intake.

Cannabis Vault : Cannabis Cookie Recipes Great Pot Cookies From: P. Bartel Date: Wed, 31 May 95 21:30:14 -0700 for 1 cookie: 1 joint worth of pot 1/4 tsp. oil (just enough to moisten the pot) 1 tbsp. oats 2 tsp. Roasted Garlic Pizza I had originally un-published this post as part of the purge but after repeated emails asking where the post went, I decided to re publish. Ever since I tried kickpleat's pizza dough recipe, we've had different pizzas probably once a week. Our favorite, however, is the roasted garlic. It's incredibly simple, very tasty, and deliciously inexpensive.

It’s all about the side dishes Hi Everyone, they can make or break a meal. Very often, they are the most memorable things about a meal; without them, let’s just say that your meal will be average with the ham, turkey, roast pork, beef or chicken all standing alone. Lonely. Side dishes are headliners in their own right. Each holiday, whether it is Christmas, Easter, Eid, Diwali or Independence, the topic centres on food – what to cook, what traditional dishes to make and what new things to try. We get caught up in a frenzy of pre-ordering meat. Jalapeno Popper Wonton Cups I love being a food blogger… You know why? Because I get to try different things for the sake of keeping up with my blog. Before I would just cook the same things over and over but since I started my blog several years ago, I’ve always been looking for different ways to cook things up.

50 Amazing Zucchini Recipes (for Sneak Some Zucchini on to Your Neighbor's Porch Day) (Originally posted with 20 Zucchini Recipes; updated with more favorites in August 2013.) It may not be an official government holiday, but gardeners everywhere celebrate August 8 as Sneak Some Zucchini on to Your Neighbor's Porch Day. Several years ago I did a zucchini round-up in honor of the day, but since then I've made so many more recipes with zucchini that I decided to give that post a make-over and update it with some of my new favorites. You still have a few more days before you need to start sneaking the zucchini on to the neighbor's porch, so maybe these recipes can help, or at least you can leave the neighbors a recipe idea along with that zucchini! I've divided the recipes into categories this time to help you find something you'll like.