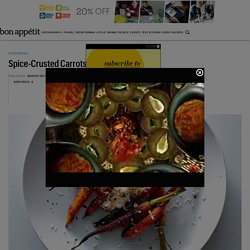 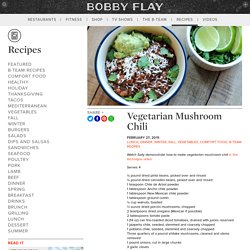 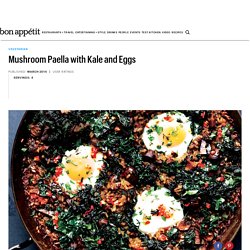 Heat 2 Tbsp. oil in a 12” paella pan or skillet over medium-high heat. Cook mushrooms, tossing occasionally, until they release their liquid, about 4 minutes. Continue to cook until liquid evaporates and mushrooms are golden brown and tender, 5–7 minutes longer; season with salt and pepper and transfer to a plate. Favorite Vegetarian Recipes. Slow Cooker Frittata. Keep your kitchen cool with this super easy frittata made in the slow cooker. 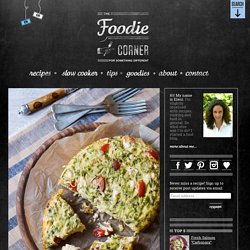 Courgettes (zucchini), cherry tomatoes and feta cheese join our eggs to make a delicious, light and summery dish. I may have mentioned this before, but I really don’t understand people who say the slow cooker is a wintery appliance. Sure, it makes great soups and stews which are generally enjoyed more in the lower temperatures, but it makes nearly anything else as well. So why not take advantage of the fact that it won’t make your kitchen feel like a bikram yoga studio? My oven has been out of commission since I think June.

So, the recipe. Crockpot Granola. Ever since giving up store-bought cereal, granola has become a staple in our house. 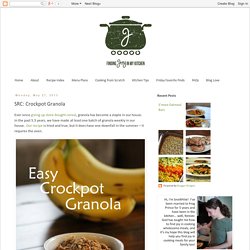 In the past 5.5 years, we have made at least one batch of granola weekly in our house. Our recipe is tried and true, but it does have one downfall in the summer – it requires the oven. This month for the Secret Recipe Club I was assigned to Erin’s beautiful blog - Table for Seven. Her recipes look amazing – including this delectable Oatmeal Chocolate Chip Quick Bread, and this savory Taco Pizza!

Parmesan Spinach Dip. Chilled Summer Squash Soup. This year I was determined to grow some yellow squash and zucchini in my tiny garden. 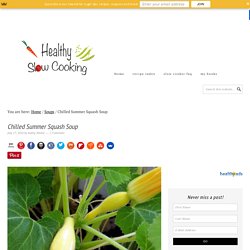 I have a ton of sun in my backyard but no good place to put an in-ground garden, so I have an Earthbox garden. It may be small but I have tomatoes, cucumbers, squash, pie pumpkins, eggplants and peppers planted this year – plus a slew of herbs. As long as I’ve had a garden I’ve had squash bugs. I always plant enough for the whole block and end up with barely enough for us. So far, this year, my yellow squash seem to be in the clear. Massel sent me a selection of their vegan bouillon to try for free. So far I’ve tried the Chicken Style Concentrated Liquid and the Veggie bouillon cubes and I really like their flavor. Having these bouillons to try got me thinking of soups – even though it’s too hot for traditional soups. Slow Cooker Summer Chowder. Slow Cooker Lasagna with Zucchini and Eggplant. Have you ever made lasagna in your slow cooker? 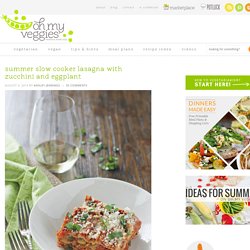 Up until the last few months, I was completely skeptical about the idea. Overnight Cinnamon Apple Oatmeal. This would be slow cooker recipe number two for this week- I’m killin’ it. 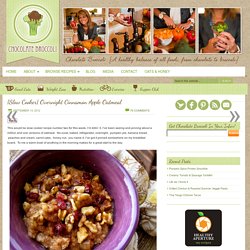 I’ve been seeing and pinning about a million and one versions of oatmeal. No-cook, baked, refrigerator, overnight.. pumpkin pie, banana bread, peaches and cream, carrot cake, honey nut.. you name it, I’ve got it pinned somewhere on my breakfast board. To me a warm bowl of anything in the morning makes for a great start to the day. Lately peanut butter and banana toast is all I can think about when I wake up in the morning, so that has been a routine breakfast for me for the past month or so. I’ll switch it up and have fruit or Greek yogurt to go with, but the PB toast is always a constant. Until this morning. CrockPot Breakfast Risotto. Day 173. 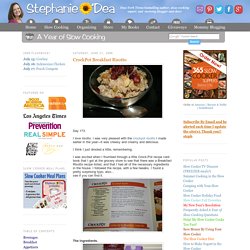 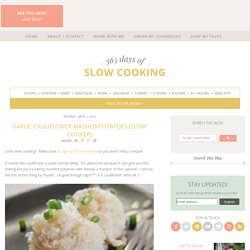 It's awesome because it can give you the feeling like you're eating mashed potatoes with literally a fraction of the calories! I almost ate this entire thing by myself...no guilt though right??? It is cauliflower, after all :) Garlic Cauliflower Mashed Potatoes (slow cooker) Makes 4-6 servings Cooking time: 2-3 hours on high or 4-6 hours on low 1 head of cauliflower 3 cups water 4 large garlic cloves, peeled 1 tsp salt 1 bay leaf 1 Tbsp butter Milk (if needed) Slow Cooker Mulled Wine. Slow Cooker Macaroni and Cheese Recipe. Oatmeal with Sauteed Mushrooms, Onion, and Thyme.

A recent study found that people who consumed oatmeal—either instant or old-fashioned—felt fuller and had a suppressed appetite over four hours, compared to people who ate ready-to-eat boxed cereals. While we're sure you've tried the hearty whole grain for breakfast, we have good news for you: It tastes equally as delicious as a savory snack or meal, any time of the day. Check out 16 ways to enjoy the filling food, any time of day.