INDIAN DIWALI SWEET RECIPES. I have tried Kaju katli two three times before and dint get it right. 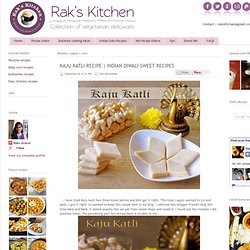 This time I again wanted to try and yeah, I got it right! So wanted to keep this recipe here in my blog. I referred two blogger friend’s blog this time,here and here. It tasted exactly like we get from sweet shops and loved it! I found out the mistake I did previous times, the powdering part has always been a trouble to me. Before this I used to grind the cashews I keep in the fridge, so while grinding, it became sticky and dint get powdered properly. Raks anandIndianSweet Prep Time: 10 mins | Cook time: 20 mins | Makes: 14 pieces Ingredients Method Powder the cashews in a dry mixer.

Boil sugar with water and keep stirring. At this stage,low the flame add the powdered cashew and keep stirring.Say for 3-4 minutes in low flame and your mixture gets thick and starts boiling, switch off the flame. Notes: Malai Kofta. Malai Kofta Gravy - Restaurant Style. The captious vegetarian. On my sister’s final night in Saarbruecken I made dosas and an Indian dish with okra and onions. 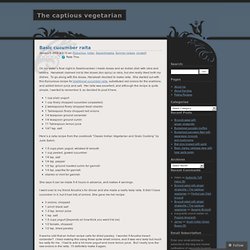 Hanaleah claimed not to like dosas (too spicy) or okra, but she really liked both my dishes. To go along with the dosas, Hanaleah decided to make raita. Cucumber Raita Recipe (Indian Yogurt sauce recipes) Ever since I was asked for a raita recipe, I have been trying to take photos of one. 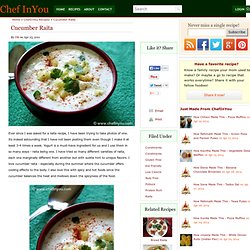 Its indeed astounding that I have not been posting them even though I make it at least 3-4 times a week. Yogurt is a must-have ingredient for us and I use them in so many ways - raita being one. I have tried so many different varieties of raita, each one marginally different from another but with subtle hint to unique flavors. I love cucumber raita - especially during the summer where the cucumber offers cooling effects to the body. I also love this with spicy and hot foods since the cucumber balances the heat and mellows down the spicyness of the food. Dahi Ke Aloo (Potato and Yogurt Soup) for Navratri and a guest post on Eat Live Run. That time of year is here again. 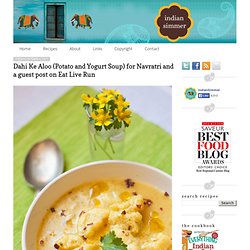 Back home this was the time when monsoon would begin to wave a bye bye. After days and weeks of playing hide and seek, sun would finally decide to show up and umbrellas would go back to the closet giving way to woolen pullovers and shawls. This would tell its time for festivals and celebrations. And right now we are in the middle of one such celebration or as someone recently said, "in the middle of celebration of mother! ". The time when we celebrate Maa the embodiment of strength, knowledge, prosperity, nurture and Shakti. Today I did the same. Ok, raise your hand if you don’t like potatoes … everyone loves potatoes! Dum Aloo. The other day I found these gorgeous fingerling potatoes in the supermarket and just picked up thinking that I have to make something out of it. 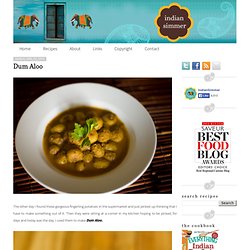 Then they were sitting at a corner in my kitchen hoping to be picked, for days and today was the day. I used them to make Dum Aloo. Dum in hindi means pressure and aloo is potatoe so you know Dum Aloo means 'pressure cooked potatoes'.Traditionally food is placed in a pot, usually made of clay, and dough is used to create a tight seal to prevent the steam from escaping. So the food is slowly cooked in its own juices, allowing the herbs and spices to fully infuse into it, while preserving the nutritional elements at the same time. No we will not be doing that. Facts: Dum Aloo is a part of Kashmiri cuisine. Ingredients: Method: Tadka tomato dal and green tomato chutney - Summer Fest. Recently I was browsing through food blogs and stumbled upon something really interesting. 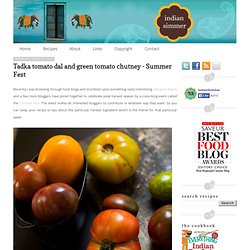 Margaret Roach and a few more bloggers have joined together to celebrate peak harvest season by a cross-blog event called the Summer Fest. The event invites all interested bloggers to contribute in whatever way they want. So you can swap your recipe or tips about the particular harvest ingredient which is the theme for that particular week.

I thought it was a cool idea and felt compelled to contribute a recipe of mine as well. This week's theme was tomatoes. A Simple Hindu Pooja Meal. We celebrated Dussehra yesterday! 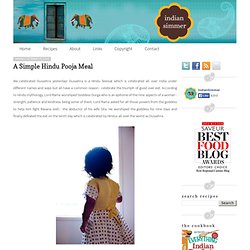 Dussehra is a Hindu festival which is celebrated all over India under different names and ways but all have a common reason - celebrate the triumph of good over evil. According to Hindu mythology, Lord Rama worshiped Goddess Durga who is an epitome of the nine aspects of a woman - strength, patience and kindness being some of them. Lord Rama asked for all those powers from the goddess to help him fight Ravana (evil) - the abductor of his wife Sita. He worshiped the goddess for nine days and finally defeated the evil on the tenth day which is celebrated by Hindus all over the world as Dussehra. Hindus believe that little girls are a form of goddess and she is smiling over families that are blessed with little girls. Dal Makhani.. Lentils at its perfection!

You know how some things or some food always remind you of someone. 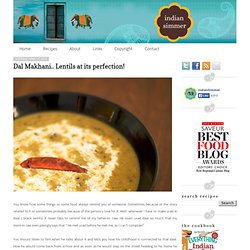 Sometimes because of the story related to it or sometimes probably because of the person's love for it. Well! Tadka tomato dal and green tomato chutney - Summer Fest.