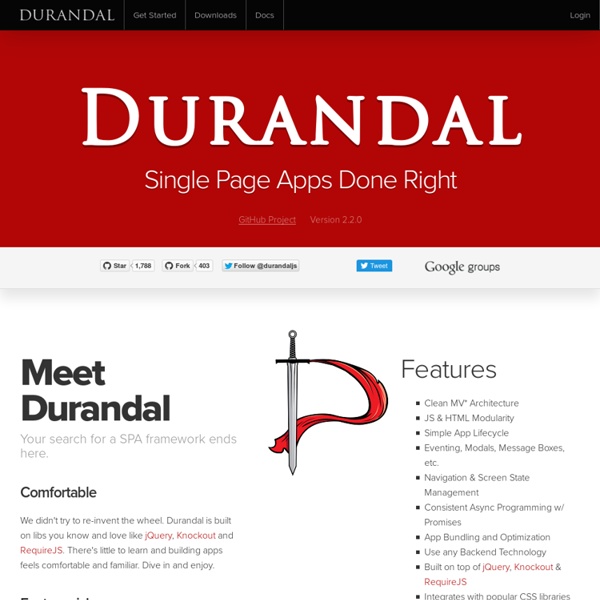 Apache Solr 4 Cookbook eBook: $26.99 Formats: $22.94 save 15%! Print + free eBook + free PacktLib access to the book: $71.98 Print cover: $44.99 $44.99 save 37%! Get a free Twitter Brand Assessment & Action Plan A Place of Record: Let The World Know Everyday people from all over the world register hashtags with Twubs. Registration provides you with a record of your claim that can be used in any trademark or other legal challenge. We record the date of registration and the important details regarding the registrant. Protect your future, register today. Aurelia vs AngularJS - Round One: FIGHT! - I Like Kill Nerds Things just got real in the front-end framework space. Durandal developer Rob Eisenberg and once upon a time short-term core Angular 2.0 developer has announced a new framework called Aurelia. A beautifully designed full-stack SPA framework with support for ECMAScript 6 syntax right out of the box and some clever design decisions. Not only does it allow you to build applications using ES6, but it supports all forms of alternative abstraction syntax out of the box like TypeScript, AtScript and even CoffeeScript.

PayPal Releases Kraken to Help Spur Node.js Adoption Michael Vizard, March 7th, 2014 PayPal, looking to provide an additional structure around the Node.js application framework, developed the Kraken implementation, a more secure and scalable framework for building commercial-grade applications. This week, PayPal is making Kraken available to the broader open-source community. Bill Scott, senior director of user interface engineering at PayPal, says Kraken is being shared with the rest of the Node.js community because its adoption outside of PayPal will spur its adoption within PayPal while at the same time making PayPal a more attractive place to work. Every time a technology gets shared with the open source community, Scott says, developers’ enthusiasm for acquiring a skill they could potentially use elsewhere winds up increasing use of that technology by orders of magnitude.

Next-gen JavaScript Framework "Aurelia" Brings Adaptive Databinding Engine Rob Eisenberg, formerly of AngularJS, has released Aurelia: a next-generation JavaScript framework with a "a first of its kind 'adaptive' databinding engine." Eisenberg announced his departure from Angular last November, saying "After almost ten months with the Angular 2.0 team, I've come to the conclusion that it's time to part ways." He clarified that he was not saying Angular 2.0 was going to be bad, simply that it was "no longer fundamentally the same thing" he had originally been hired to help build, and that it was not compatible with his vision for the future with Durandal. Eisenberg's vision for the future with Durandal is already taking shape with early previews of Aurelia.

File: README [Unicorn: Rack HTTP server for fast clients and Unix] Application_TimeoutsCONTRIBUTORSDESIGNFAQHACKINGISSUESKNOWN_ISSUESLICENSELinksNEWSPHILOSOPHYREADMESIGNALSSandboxTUNINGunicorn_1UnicornConfiguratorHttpServerOobGCPrereadInputStreamInputTeeInputUtilWorker unicorn is an HTTP server for Rack applications designed to only serve fast clients on low-latency, high-bandwidth connections and take advantage of features in Unix/Unix-like kernels. Slow clients should only be served by placing a reverse proxy capable of fully buffering both the the request and response in between unicorn and slow clients. Features Designed for Rack, Unix, fast clients, and ease-of-debugging.

Creating a Next Gen JavaScript Application with Aurelia 2015 brings with it the finalization of the ECMAScript 6 specification and with that the confidence to build modern, superior applications in JavaScript. The current landscape of JavaScript frameworks is dominated by the recognizable giants AngularJS and React both of which are aiming in some way, shape or form, to incorporate new ES6 features into their paradigms. There is however, another player that while new and relatively secretive, looks elegant in its use of modern JavaScript features. os-x-mavericks-10-9-retail-vmware-image-t7981468 Full release notes can be found here: First version of the OS X Mavericks Retail VMware Image. Contains OS X Mavericks GM, and is compiled entirely from stock. Boots on average around a minute although it can be in as little as 25 seconds sometimes., but make sure to give up to 10 just in case.

Swiper - Mobile Touch Slider And Framework With Hardware Accelerated Transitions Swiper - is the free and ultra lightweight mobile touch slider with hardware accelerated transitions (where supported) and amazing native behavior. It is intended to use in mobile websites, mobile web apps, and mobile native apps. Designed mostly for iOS, but also works great on Android, Windows Phone 8 and modern Desktop browsers. Swiper is created by iDangero.us 1:1 Touch movementBy defaut Swiper provides 1:1 touch movement interraction, but this ration could be configured through Swiper settings.Touch emulationThis function will be useful if you are going to use Swiper on desktop sites. With all these features you can build amazing touch interfaces and apps with awesome native behavior.

The Next Big Programming Language You’ve Never Heard Of Getty Andrei Alexandrescu didn’t stand much of a chance. And neither did Walter Bright. When the two men met for beers at a Seattle bar in 2005, each was in the midst of building a new programming language, trying to remake the way the world creates and runs its computer software. That’s something pretty close to a hopeless task, as Bright knew all too well. “Most languages never go anywhere,” he told Alexandrescu that night. Download Burp Suite Please choose the edition of Burp Suite that is right for you. Help me choose › "Burp Suite Pro is an unbelievably powerful tool. Which Linux distros are the best? - Renewable PCs Ubuntu[1] - The flagship distro of Canonical, Ltd., Ubuntu (which is an ancient African word meaning "humanity to others") has the Unitydesktop shell that runs on top of GNOME 3 in its most recent version. Ubuntu is extremely user-friendly, which makes it an excellent choice for Linux beginners. Because it is based on Debian, Ubuntu shares the ability to run .deb files and has many of the same features. Like many other Linux distros, Ubuntu can be downloaded and burned to make a live DVD or live USB to run and test the operating system before installing.