The School Superintendents Association. Mobile County, Ala., begins a districtwide transformation to support classrooms in effective technology use By Debbie T. 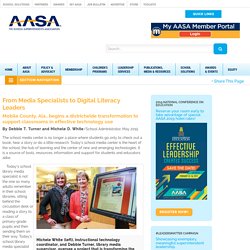 Turner and Michele D. White/School Administrator, May 2015. How Can Your Librarian Help Bolster Brain-Based Teaching Practices? Flickr/Kevin Harber Inquiry-based learning has been around in education circles for a long time, but many teachers and schools gradually moved away from it during the heyday of No Child Left Behind. 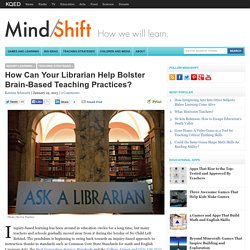 The pendulum is beginning to swing back towards an inquiry-based approach to instruction thanks to standards such as Common Core State Standards for math and English Language Arts, the Next Generation Science Standards and the College, Career and Civic Life (C3) Framework for Social Studies State Standards. Transitioning to this style of teaching requires students to take a more active role and asks teachers to step back into a supportive position. It can be a tough transition for many students and their teachers, but turning to the school librarian for support could make the transition a little easier. “The inquiry process is brain-based from beginning to end,” said Ratzen, a former teacher, current librarian and adjunct professor in an edWeb webinar.

Support for librarians, fight to keep them 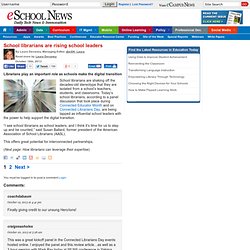 Today’s school librarians, according to a panel discussion that took place during Connected Educator Month and on Connected Librarians Day, are being tapped as influential school leaders with the power to help support the digital transition. “I see school librarians as school leaders, and I think it’s time for us to step up and be counted,” said Susan Ballard, former president of the American Association of School Librarians (AASL).

This offers great potential for interconnected partnerships. (Next page: How librarians can leverage their expertise) NCLE Study. For Immediate Release Tue, 04/09/2013 - 15:33 CHICAGO – A new report released by the National Center for Literacy Education (NCLE) reveals that school librarians are highly involved leaders playing a critical role in their schools through consistent and sustained collaboration with other educators. 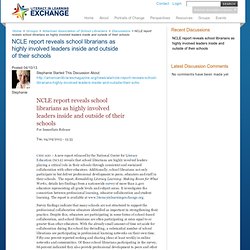 Additionally, school librarians not only participate in but deliver professional development to peers, educators and staff in their schools. The report, Remodeling Literacy Learning: Making Room for What Works, details key findings from a nationwide survey of more than 2,400 educators representing all grade levels and subject areas. It investigates the connection between professional learning, educator collaboration and student learning. Survey findings indicate that many schools are not structured to support the professional collaboration educators identified as important in strengthening their practice. 2013 Study: School Libraries & Student Achievement. Library Research Service School Libraries & Student Achievement (2013) This 1-page infographic presents highlights from all of LRS’s school library impact studies. 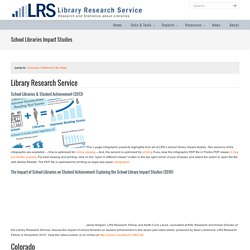 Two versions of the infographic are available: – One is optimized for online viewing – And, the second is optimized for printing If you view the infographic PDF file in Firefox PDF viewer, it may not render properly. For best viewing and printing, click on the “open in different viewer” button in the top right corner of your browser, and select the option to open the file with Adobe Reader. The PDF file is optimized for printing on legal size paper. The Impact of School Libraries on Student Achievement: Exploring the School Library Impact Studies (2010) Colorado Change in school librarian staffing linked with change in CSAP reading performance, 2005 to 2011 (2012) This report examines the change in CSAP reading scores of Colorado students, from 2005 to 2011, as influenced by changes in school library staffing levels. Lance, K. Librarians as Tech Leaders. SLJ’s May 2011 cover featured the technology survey. 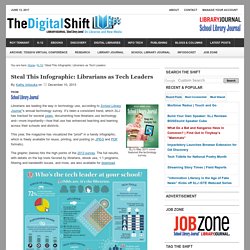 Librarians are leading the way in technology use, according to School Library Journal’’s annual technology survey. It’s been a consistent trend, which SLJ has tracked for several years, documenting how librarians use technology and—more importantly—how that use has enhanced teaching and learning across their schools and districts. This year, the magazine has visualized the “proof” in a handy infographic, which is freely available for reuse, printing, and posting (in JPEG and PDF formats). The graphic (below) hits the high points of the 2013 survey­.