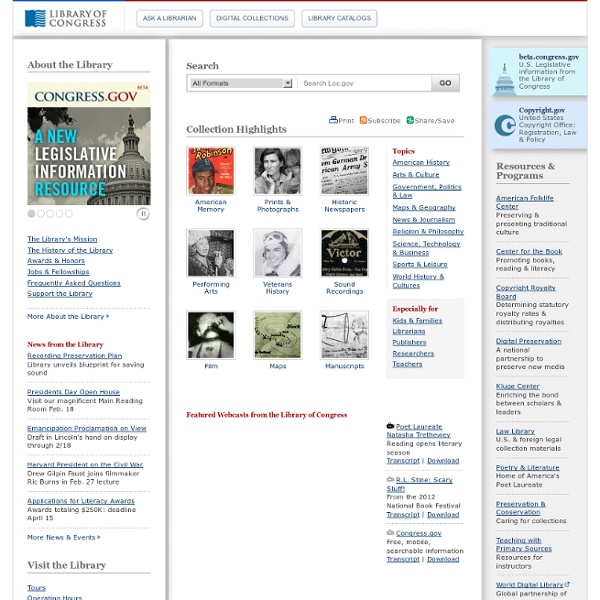 What Is Creative Commons, And Should You Use It? While writing out your next academic paper, you look online for various images which are appropriate for what you’re talking about. Once you find something you like, you simply copy and paste it because, hey, who’s stopping you? More than likely, doing this is technically illegal. Not only that, but it applies to most content that you can find online — including posts/articles and videos. Civil War Primary Sources Primary Documents by Topic: Most Popular Official Records Addresses & Speeches Acts, Bills, & Orders Military Correspondence & Documents Personal Correspondence & Narratives Prints & Photos Maps Document Collections Getting Started Primary Documents Official Confederate Correspondence Robert E.

Daoist Perspectives on Chinese and Global Environmental Management The Culture Mandala, 4 no. 2, November 2001. Copyright © Rosita Dellios 2001 Daoist Perspectives on Chinese and Global Environmental Management(1) by Rosita Dellios Welcome to OurDocuments.gov The following is a list of 100 milestone documents, compiled by the National Archives and Records Administration, and drawn primarily from its nationwide holdings. The documents chronicle United States history from 1776 to 1965. Complete List of Documents Please note that you can always use the thumbnail images at the top of every page to navigate directly to any of the 100 Milestone Documents. home 100 milestone documents Free To Use and Share: Resources To Help Teach Kids (and Adults!) About Copyright and Creative Commons I've gotten a few requests lately for resources on how to teach kids (and adults!) about copyright. I've written before about how I don't think any lesson on copyright can be effective without an emphasis on creative commons and helping students choose licenses for their own work. Still, there are plenty of good resources out there to help start these conversations or that can serve as reminders as you help create a culture of creativity and attribution at your school.

National Art Inventories What are the Inventories? The Inventories of American Painting and Sculpture document more than 400,000 artworks in public and private collections worldwide. The Inventory of American Paintings includes works by artists who were active in America by 1914. The Inventory of American Sculpture has no cut-off date and includes works from the colonial era through contemporary times. Here’s How America Uses Its Land Using surveys, satellite images and categorizations from various government agencies, the U.S. Department of Agriculture divides the U.S. into six major types of land. The data can’t be pinpointed to a city block—each square on the map represents 250,000 acres of land. But piecing the data together state-by-state can give a general sense of how U.S. land is used.

Taoism - Ageless Wisdom for a Modern World - Part 3 Taoism’s central organizing principle is the interconnectedness of all life with its flow of continuous change. Nowhere is this idea expressed in such a unique and exquisite manner as in the concept of yin-yang, which describes the underlying unity of life through the interplay of opposites. Taoist writings state that all things and all processes contain two primal energies or forces. These two basic aspects of manifestation often are described as masculine and feminine, light and dark, negative and positive, creative and receptive. DocsTeach Help your students think through primary source documents for contextual understanding and to glean information to make informed judgments. The first few times you ask students to work with primary sources, and whenever you have not worked with primary sources recently, be sure to model careful document analysis. Direct students’ attention to the procedures involved and the kinds of questions you ask about the documents. After several instances of modeling, ask students to work as a class to analyze documents, vocalizing the process as they go.