GitHub - KeepSafe/TapTargetView: An implementation of tap targets from the Material Design guidelines for feature discovery. GitHub - smanikandan14/ThinDownloadManager: To download files and to avoid using DOWNLOAD_WITHOUT_NOTIFICATION permission if you are using Android's DownloadManager in your apps. Android MediaPlayer Tutorial. Android provides many ways to control playback of audio/video files and streams. 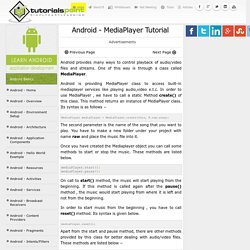 One of this way is through a class called MediaPlayer. Android is providing MediaPlayer class to access built-in mediaplayer services like playing audio,video e.t.c. In order to use MediaPlayer , we have to call a static Method create() of this class. This method returns an instance of MediaPlayer class. Its syntax is as follows − MediaPlayer mediaPlayer = MediaPlayer.create(this, R.raw.song); The second parameter is the name of the song that you want to play. Once you have created the Mediaplayer object you can call some methods to start or stop the music. 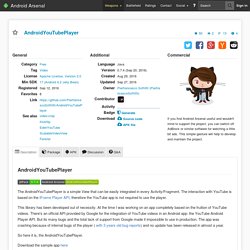 The interaction with YouTube is based on the IFrame Player API, therefore the YouTube app is not required to use the player. This library has been developed out of necessity. At the time I was working on an app completely based on the fruition of YouTube videos. There's an official API provided by Google for the integration of YouTube videos in an Android app: the YouTube Android Player API. So here it is, the AndroidYouTubePlayer. Download the sample app here Apps using this library: Shuffly Download. GitHub - florent37/MaterialViewPager: A Material Design ViewPager easy to use library.

GitHub - Clans/FloatingActionButton: Android Floating Action Button based on Material Design specification. Amlcurran/ShowcaseView: Highlight the best bits of your app to users quickly, simply, and cool...ly. Siyamed/android-satellite-menu: Android Satellite Menu. Android Libraries and Resources. 6Wunderkinder SlidingLayer for Android A library that provides an easy way to include an autonomous layer/view that slides from the side of your screen and which is fully gesture ready, the same way as our detail view in Wunderlist 2 does. 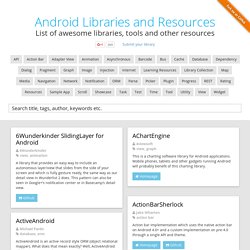 This pattern can also be seen in Google+’s notification center or in Basecamp’s detail view. AChartEngine This is a charting software library for Android applications. Mobile phones, tablets and other gadgets running Android will probably benefit of this charting library. ActionBarSherlock Action bar implementation which uses the native action bar on Android 4.0+ and a custom implementation on pre-4.0 through a single API and theme. 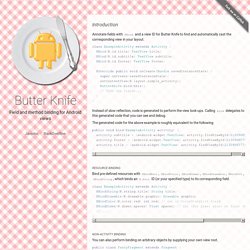 Calling bind delegates to this generated code that you can see and debug. The generated code for the above example is roughly equivalent to the following: Material Design with the Android Design Support Library. Material Design, a new design language that gives design guidelines for Android apps and apps on other platforms, was introduced with the release of Android 5.0 Lollipop. 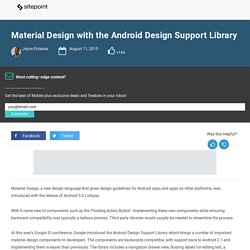 With it came new UI components such as the ‘Floating Action Button’. Implementing these new components while ensuring backward compatibility was typically a tedious process. Third party libraries would usually be needed to streamline the process. At this year’s Google IO conference, Google introduced the Android Design Support Library which brings a number of important material design components to developers. The components are backwards compatible, with support back to Android 2.1 and implementing them is easier than previously. Getting Started You can find the final project code on gitHub. Before getting started on the components, we’ll set up the project and set some styles. Add the following dependencies to the build.gradle (Module:app) file. GitHub - dbachelder/CreditCardEntry: Smooth UI for Credit Card Entry on Android device, regex check for supported credit card types and luhn check. Inspired by Square credit card entry interface. Android-Libs - your portal for android libraries and tools.