Ask Retraction Watch: Is it OK to cite a retracted paper? Photo by Bilal Kamoon via flickr From our mailbox: I’m writing regarding a recent query from an author about citation of a retracted article. 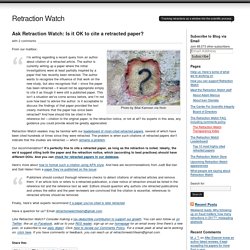 The author is currently writing up a paper where the initial investigations were at least partially inspired by a paper that has recently been retracted. Authorship and citation manipulation in academic research. Abstract Some scholars add authors to their research papers or grant proposals even when those individuals contribute nothing to the research effort. 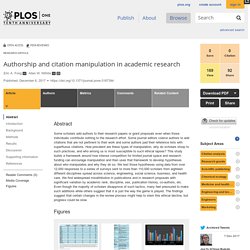 Some journal editors coerce authors to add citations that are not pertinent to their work and some authors pad their reference lists with superfluous citations. How prevalent are these types of manipulation, why do scholars stoop to such practices, and who among us is most susceptible to such ethical lapses? This study builds a framework around how intense competition for limited journal space and research funding can encourage manipulation and then uses that framework to develop hypotheses about who manipulates and why they do so.

We test those hypotheses using data from over 12,000 responses to a series of surveys sent to more than 110,000 scholars from eighteen different disciplines spread across science, engineering, social science, business, and health care. Starting next year, universities have to prove their research has real-world impact. Starting in 2018, Australian universities will be required to prove their research provides concrete benefits for taxpayers and the government, who fund it. 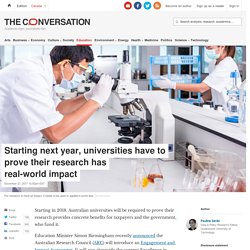 Education Minister Simon Birmingham recently announced the Australian Research Council (ARC) will introduce an Engagement and Impact Assessment. It will run alongside the current Excellence in Research Australia ERA assessment exercise. This follows a pilot of the Engagement and Impact Assessment, run in 2017. Read more: Pilot study on why academics should engage with others in the community Until now, research performance assessment has mostly been focused on the number of publications, citations and competitive grants won.

Guide to academic search. This guide was created by the curator of the JURN search-engine. Below is a short guide to various free search-engines and tools. Specifically, to those tools likely to lead to open material useful for UK students and researchers in the arts and humanities. Altmetrics tools: which is best for you? Part 1 « Research Impact - The University of Sydney Library. Information Literacy Lessons. Get savvy about online impact. 6 June 2017 by researchwhisper Dennis Relojo is the Founder of Psychreg and is the Editor-in-Chief of the new Psychreg Journal of Psychology. 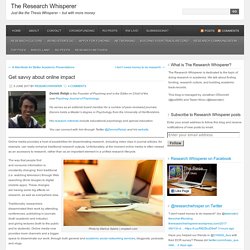 He serves as an editorial board member for a number of peer-reviewed journals. Dennis holds a Master’s degree in Psychology from the University of Hertfordshire. His research interests include educational psychology and special education. You can connect with him through Twitter @DennisRelojo and his website. Altmetrics for the humanities: Disciplines, output types, and discovery – Altmetric. How can humanists increase the attention paid to their work, using insights from altmetrics? 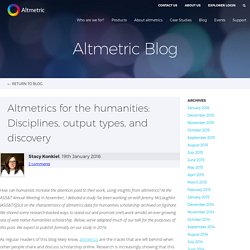 At the ASIS&T Annual Meeting in November, I debuted a study I’ve been working on with Jeremy McLaughlin (ASIS&T/SJSU) on the characteristics of altmetrics data for humanities scholarship archived on figshare. We shared some research-backed ways to stand out and promote one’s work amidst an ever-growing sea of web-native humanities scholarship. Below, we’ve adapted much of our talk for the purposes of this post. We expect to publish formally on our study in 2016. As regular readers of this blog likely know, altmetrics are the traces that are left behind when other people share and discuss scholarship online. Beall’s List of Predatory Publishers 2016. Beall’s List of Predatory Publishers 2016. 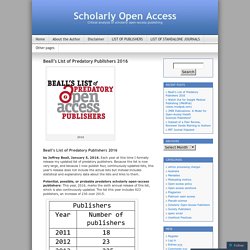 » The Library as Research Partner ACRL TechConnect Blog. As I typed the title for this post, I couldn’t help but think “Well, yeah. 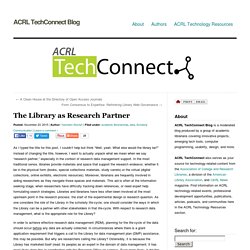 What else would the library be?” Instead of changing the title, however, I want to actually unpack what we mean when we say “research partner,” especially in the context of research data management support. In the most traditional sense, libraries provide materials and space that support the research endeavor, whether it be in the physical form (books, special collections materials, study carrels) or the virtual (digital collections, online exhibits, electronic resources).

Moreover, librarians are frequently involved in aiding researchers as they navigate those spaces and materials. This aid is often at the information seeking stage, when researchers have difficulty tracking down references, or need expert help formulating search strategies. Hidden Online Surveillance: What Librarians Should Know to Protect Their Own Privacy and That of Their Patrons.

Journal of Librarianship and Scholarly Communication. 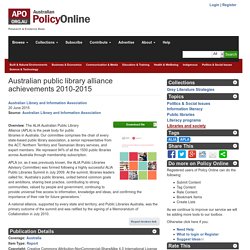 Our committee comprises the chair of every state-based public library association, a senior representative from the ACT, Northern Territory and Tasmanian library services, and expert members. We represent 94% of all the 1500 public libraries across Australia through membership subscription. APLA (or, as it was previously known, the ALIA Public Libraries Advisory Committee) was formed following a highly successful ALIA Public Libraries Summit in July 2009. At the summit, libraries leaders called for, ‘Australia’s public libraries, united behind common goals and ambitions, sharing best practice, contributing to strong communities, valued by people and government, continuing to provide universal free access to information, knowledge and ideas, and confirming the importance of their role for future generations.’ Wendy Frerichs sur Twitter : "#Librarians in Melb #ALIARAIS15 event this Thurs 6-8pm @library_rmit RSVP here Event Info here. 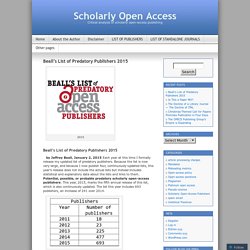 Because the list is now very large, and because I now publish four, continuously-updated lists, this year’s release does not include the actual lists but instead includes statistical and explanatory data about the lists and links to them. Potential, possible, or probable predatory scholarly open-access publishers: This year, 2015, marks the fifth annual release of this list, which is also continuously updated. Developing a new approach to information literacy learning design. Interesting Search Engines. From Tweet to Blog Post to Peer-Reviewed Article: How to be a Scholar Now. Digital media is changing how scholars interact, collaborate, write and publish. 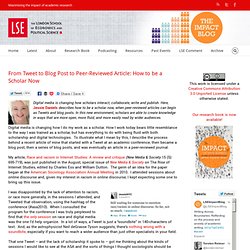 Here, Jessie Daniels describes how to be a scholar now, when peer-reviewed articles can begin as Tweets and blog posts. In this new environment, scholars are able to create knowledge in ways that are more open, more fluid, and more easily read by wider audiences. Digital media is changing how I do my work as a scholar. How I work today bears little resemblance to the way I was trained as a scholar, but has everything to do with being fluid with both scholarship and digital technologies. To illustrate what I mean by this, I describe the process behind a recent article of mine that started with a Tweet at an academic conference, then became a blog post, then a series of blog posts, and was eventually an article in a peer-reviewed journal. The blog has also become a way to support other scholars both in their research and in teaching. This piece is cross-posted on the JustPublics@365 blog.

About the Author. 7 Great Bibliography and Citation Tools for Students. 1- Bibme This is the fully automatic bibliography maker that auto-fills. It is the easiest way to build a works cited page. 2- Easy Bib. Research impact: Altmetrics make their mark : Naturejobs. The Myth and the Reality of the Evolving Patron. Released: June 29, 2013 By Lee Rainie [slideshare id=23746168&doc=2013-62913-evolvinglibrarypatron-rusaatalapdf-130701122027-phpapp02] The Reference and User Services Association (RUSA) hosted Lee Rainie, director of the Pew Research Center’s Internet & American Life Project, for “The Myth and the Reality of the Evolving Patron: The RUSA President’s Program” on Saturday, June 29 at the 2013 ALA Annual Conference in Chicago; RUSA also hosted a discussion of the issues presented at the program on Sunday, June 30. Library DIY: Unmediated point-of-need support. I recently realized that while I write about a lot of things, I do not often write about the work I’m doing at Portland State and through the Oregon Library Association.

I think it comes partly from a desire not to toot my own horn, but it also reflects my nervousness about writing about work (and the politics inherent in that). But it’s silly, because there are so many projects we’ve undertaken that I’m immensely proud of. So I’ve decided to start writing about some of those, the first being Library DIY. I was one of those people who never asked a reference librarian for help. Ever.