Peace, quiet and the occasional flashmob: how libraries and patrons are evolving. HALIFAX – Libraries can conjure up images of dim, musty spaces and stern librarians with index fingers pressed to their lips, ready to shush. 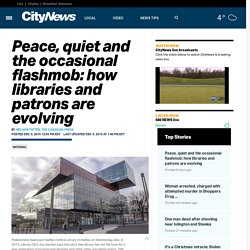 But the Halifax Central Library, with its cafes, auditorium space and video-gaming section, challenges every traditional notion of what these public spaces should be. Here, patrons are encouraged to hang out, snack and yes, even talk. Library CEO Asa Kachan says the sleek downtown structure, which celebrates its first anniversary Dec. 13, has set the tone for a new generation of progressive libraries and other cities are taking notice. “I think it’s the most exciting time to be in public libraries,” says Kachan, Halifax Central’s chief librarian. “We have the traditional role, which is to bring information and inspiration to people through literature. In Halifax, that means space to record a podcast, play a board game or stumble upon a group of breakdancers — for free. Library of Congress: Can the LOC be saved?

James Billington, the current Librarian of Congress, has held the office for nearly three decades, a longer tenure than most Supreme Court justices. 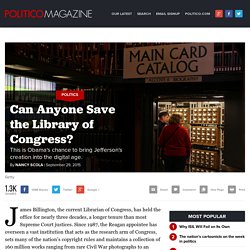 Since 1987, the Reagan appointee has overseen a vast institution that acts as the research arm of Congress, sets many of the nation’s copyright rules and maintains a collection of 160 million works ranging from rare Civil War photographs to an exquisite 15th-century Gutenberg Bible, locked behind glass in the Library’s Great Hall. But under his leadership, the Library of Congress has earned a reputation as a technology laggard with a spotty record on everything from digitizing records to improving archaic IT systems. And so, as the 86-year-old Billington steps down this week, tech advocates are pushing for an Internet-savvy replacement—seeing a rare chance to modernize a cultural and policy-making institution that’s fallen far behind in the digital age. Story Continued Below. Will Libraries Outlive Books? Can you imagine only one universal library in the world by the next century? 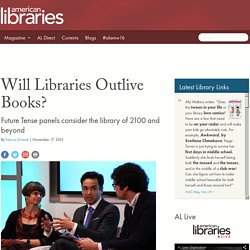 And what might a librarian’s profile look like—more scientist or content manager? The Future Of Libraries Is Collaborative, Robotic, And Participatory. To look at the state of many libraries after the recession, facing cuts and closures and fundamental questions about "relevance," you could be forgiven for being gloomy about their future.

"Libraries can survive these times of technological upheaval, but they're going to have to change—and fast." – jdgr_sjsu 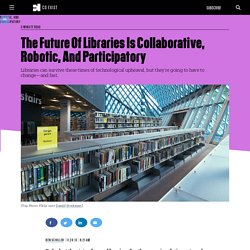 Massachusetts Institute of Technology. The Future of Libraries: Closing Endnote Panel. Closing Endnote Panel: (L-R) Ken Haycock, Susan Hildreth, Kim Bui-Burton The closing panel on the challenges facing future libraries and strategies for addressing them was moderated by Ken Haycock, Research Professor at the Marshall School of Business at the University of Southern California. 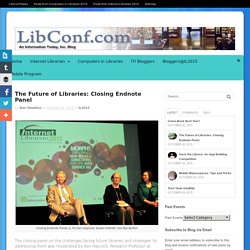 Panelists were Susan Hildreth, Executive Director of the Peninsula Library System, and Kim Bui-Burton, Community Services Director, City of Monterey. The following is an edited summary of the discussion. Susan: We still have the challenge of the community understanding and acknowledging what we do. We can address that by embedding ourselves in the community. Kim: One of the biggest challenges is funding. The conference center was built in the 1970s and needs to be rebuilt. Massachusetts Institute of Technology. Task Force on Future of Libraries begins work.

Public libraries are a place for families to connect. On an average day, 550 people visit a public library in Kittitas County. 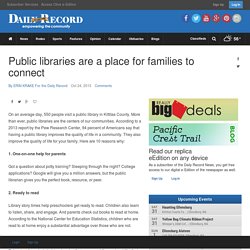 More than ever, public libraries are the centers of our communities. According to a 2013 report by the Pew Research Center, 94 percent of Americans say that having a public library improves the quality of life in a community. They also improve the quality of life for your family. Here are 10 reasons why: 1. Got a question about potty training? 2. Library story times help preschoolers get ready to read. 3. Baby story times help babies develop their gross and fine motor skills, their eyesight, and their language and emotional and intellectual capabilities. 4. The library provides a safe and relaxing place for teens and tweens to hang out when they aren’t in school or involved in other activities. 5. Public libraries help students get their work done outside of school. 6. According to the Annie E. 7. 8. 9. The near and far future of libraries — Hopes&Fears — flow "Technology" My background is in linguistics, and my graduate research involveddocumenting some of the most endangered languages in the world. 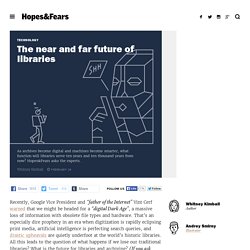 I alsoworked in a small language archive where we had been given field notesby people who’d researched languages with few speakers left. In somecases, archival materials are the only materials that remain forspoken languages. If you’ve ever had that experience of holding something in your hands that is the only one of its kind, you begin to realize how precious and perishable this information is. I would sometimes travel to archives to examine books and manuscripts that had no copies made of them, and hold these precious manuscripts in my hands–this was all before digitization–and in some cases they were crumbling away.

If you’re making an archival relic for future generations, it’s veryimportant to have “signposts” directing people to know that it exists,how to find it, and how to access the information on it.