Institute for the Unstable Media 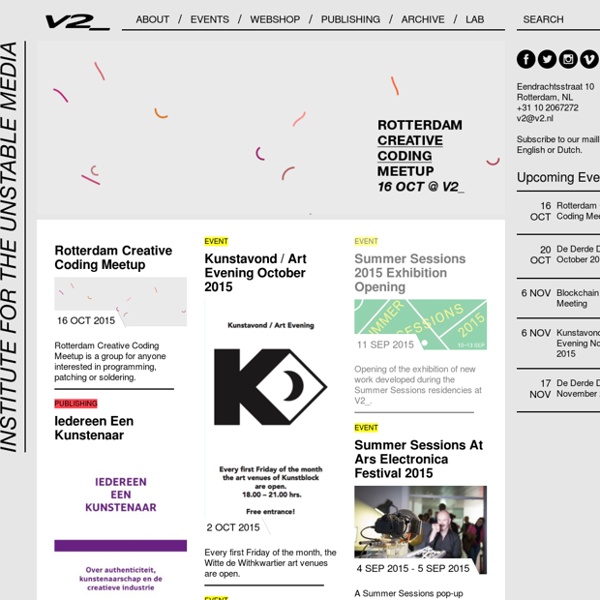 Ars Electronica Festival The ARS ELECTRONICA FESTIVAL premiered on September 18, 1979. This pilot project was designed to take the Digital Revolution’s emergence as an occasion to face important questions about the future and to focus these inquiries on the nexus of ART, TECHNOLOGY and SOCIETY. With this philosophy—which remains Ars Electronica’s watchwords to this day—HANNES LEOPOLDSEDER, then director of the ORF – Austrian Broadcasting Company’s Upper Austria Regional Studio, electronic musician HUBERT BOGNERMAYR, cyberneticist/physicist HERBERT W.

Net Art Generations 19 November 2013: I don't remember when I made these notes, must be the end of 2007 Net art can be divided into more than just two generations like old and new or 1.0 and 2.0, or internet and post internet. There are at least three plus one more. The 1st -- Artists working with the Internet as a new medium. Coming from other backgrounds, like film, performance, photography, whatever. Multi-touch applications with Flash « Digital Music Volvelles I’ve written in a previous post that there is the idea of a standardised technique to connect multi-touch hardware to multi-touch software via TUIO. As we want to concentrate on Flash as visualisation and interaction layer for our digital volvelles I will present a Flash AS3 API for multi-touch with TUIO in this and further posts. The touchlib project from the NUI Group is a collection of software tools for the realisation of a multi-touch table. It provides tools like digital image processing for the tracking of fingers on a multi-touch screen, a TUIO server and so on. It additionally provides a Flash AS3 library in order to process TUIO messages inside of Flash and to provide standard interface elements e.g. sliders. All Flash applications that are being built with touchlib’s AS3 library can not only be used with a TUIO enabled multi-touch device but also with a mouse.

Réseau des villes creatives A propos de la ville créative: Ever since the inception of Ars Electronica and the Cloud of Sound in 1979, Linz – Europe’s 2009 Capital of Culture – has been making impressive strides as a trailblazer and international hotbed of media arts and digital competence. The annual Ars Electronica Festival and Prix Ars Electronica showcase and honour excellence and deliver essential impetus to media culture worldwide; while the Ars Electronica Centre and Futurelab are driving forces for innovation both in research and development as well as in education throughout the region. Today, the city is concentrating on transforming a former industrial site located in the heart of the inner city into a centre of the creative economy: the Linz’s Tabakfabrik campus, with Creative Region, Linz and Upper Austria’s creative industries development company, at its core. Another priority on the city’s agenda is to become Europe’s first Open Commons region.

PAGES IN THE MIDDLE OF NOWHERE (former FIRST AND THE ONLY REAL NET ART GALLERY) Appearing next at 12.04.14 Ruins and Templates of Hyves: MOTI,Breda (talk) 26.04.14 Beautiful 0s and Ugly 1s, ITFS, Stuttgart (talk) 23.05.14 My Social Media; Literatur und Strom 5, Literatur Haus, Stuttgart (talk) to olia lialina's home! Summer Tracking Demo2009 - V2_Lab Projects - Trac Back To Wiki base Introduction ¶ For the last couple of years V2_lab has been working with various tracking system. The aim of this research was to find an absolute tracking system that allows us to track the position and orientation of multiple individual instances as fast and as accurate as possible.

Jon Ippolito Welcome to Jon Ippolito's home page. Browse topics at upper left or choose themes from the cloud above. Built with By now university administrators and IT departments are accustomed to passing on letters from the music industry accusing students of sharing music il... A HASTAC scholarship, an interview published by the Smithsonian, and a cover story in ARTnews that mentions a landmark book by one of the professors.... One of the challenges of Maine’s first THATCamp (the 2013 Digital Humanities Week) was how to get 60 people to decide what they want to learn t...

android-multitouch-controller - Project Hosting on Google Code Welcome to the android-multitouch-controller project on Google Code. This project currently comprises three Android sub-projects: (1) MTController, the MultiTouch Controller class for Android (see below); (2) MTVisualizer, the source code for the app "MultiTouch Visualizer 2" on Google Play; (3) MTPhotoSortr, a demo app showing how to use the MultiTouch Controller class. CRONOGRAF - Festival CRONOGRAF Festival is at the moment the only international documentary film festival in Moldova and it is organized in Chisinau starting 2001. This event came into existence at the initiative of a young group of Moldavian filmmakers that were organized within OWH Studio. Their aim was to animate the cultural life in the Republic of Moldova and to bring closer to the local public the latest documentaries from all over the world. IDFF CRONOGRAF has reached the 12th edition.