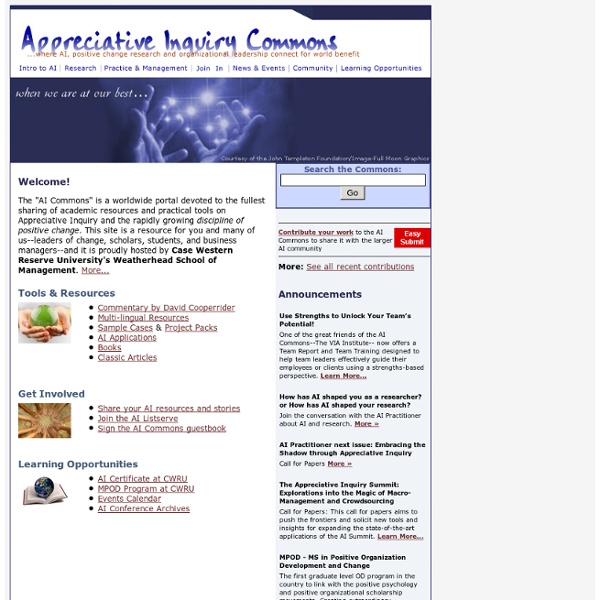 Social Value Creation: How To Manufacture Wisdom We call this wisdom In the old days, the hiring manager was the person to know if you wanted to get a job. They would read your resume and compare it with the “bell curve” in their mind. This bell curve contains a statistical sample of all similar situations that the manager has witnessed, the variables involved, and a range of outcomes observed across their long and illustrious career…Ohhhmmmmmm People and Performance In this current economic climate, the role of a people manager is more demanding than ever before. The pressure to increase business performance with scarcer resources is the current reality. The people manager has to find a new way of managing – a way of raising their own performance and that of their direct reports that is both consistent and value driven.

Appreciative inquiry According to Gervase R. Bushe[1] (2013) "Appreciative Inquiry (AI) is a method for studying and changing social systems (groups, organizations, communities) that advocates collective inquiry into the best of what is in order to imagine what could be, followed by collective design of a desired future state that is compelling and thus, does not require the use of incentives, coercion or persuasion for planned change to occur." Developed and extended since the mid 1980s primarily by students and faculty of the Department of Organizational Behavior at Case Western Reserve University, AI revolutionized the field of organization development and was a precursor to the rise of positive organization studies and the strengths based movement in American management."

Appreciative Inquiry Resources by Gervase Bushe On this page you will find Gervase Bushe's thoughts on... What is Appreciative Inquiry? Appreciative Inquiry has been effectively applied in the following ways: People power transforms the web in next online revolution In July 2004, US cinema advertisements for Halo 2, the science fiction computer game, briefly carried the address for a website - ilovebees.com - which appeared to belong to a beekeeper who had mysteriously disappeared. Her honey-based recipes had been replaced by an apparently random list of numbers. Over four months 600,000 people joined in solving the mystery of what the numbers meant. What unfolded was a striking display of 'We Think': structured, mass collaborative creativity and intelligence.

In the Library with the Lead Pipe Image from the National Archives and Records Administration Archival Research Catalog Have you ever found yourself thinking: “I know I said yes to this, but now I wish I’d said no. That’s what I wanted to say in the first place”? Chances are you said yes because you were afraid to say no or you didn’t know how, or you don’t like saying no. If you were afraid to say no maybe you felt that you would be looked on as being difficult to work with, or that you would receive a poor job performance review.

Appreciative Inquiry What is Appreciative Inquiry? by Joe Hall and Sue Hammond also offers a reasonably brief and readable introduction to the principles and practice of AI. Richard Seel: "We use AI principles quite a lot in our work – for instance, when a team I was working with suddenly had the plug pulled on their project they were very angry and depressed. Appreciative Inquiry: Tapping into the River of Positive Possibilities by Herb Stevenson Background David Cooperrider realized that most organizations are predisposed towards “what is wrong” within the organization. 360 Degree Feedback: The Good, the Bad, and the Ugly Want to make people happy? Make people sad? Care to create an uproar in your organization that rivals in ferocity any change you’ve ever introduced in your history? Want to stir up all of the dormant fear balls hidden just below the surface in your organization? I know; you think I’m talking about laying off half your staff. Right?