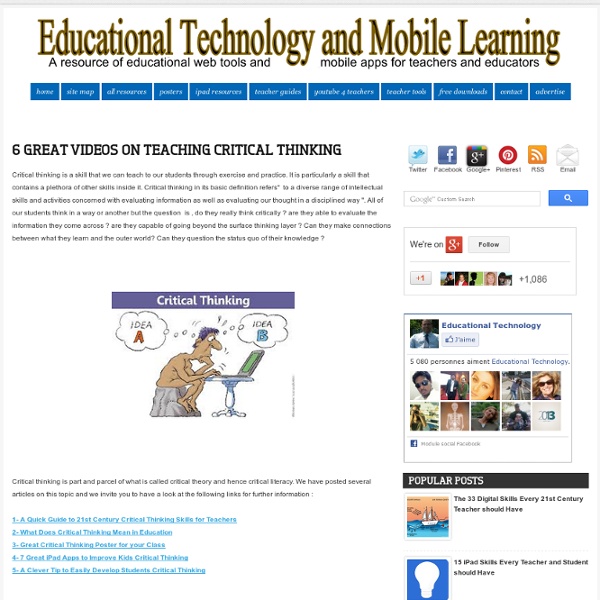 How To Cite A Tweet The MLA has acknowledged Twitter’s existence. In case you missed this back in March, twitter, the plucky social media network with much of Facebook’s reach but none of its self-adoration, received a vote of confidence from an unlikely source: the Modern Language Association. Long an indirect but potent tool of torture in English classrooms and University campuses everywhere, the MLA (and other cohorts, including APA and Chicago) released a format for quoting tweets in formal writing. While one may not consider twitter as the most natural primary source of information, if you consider a constant stream of humanity’s chatter as relevant, twitter is then relevant indeed. Could there be more coming? Due to its slow, gloomy gait, formal academia has yet to fully arrive on the social media scene, and when they’ve gotten close, it’s often been with a get off my lawn tone.

10 Interactive Lessons By Google On Digital Citizenship 10 Interactive Lessons By Google On Digital Citizenship Added by Jeff Dunn on 2012-07-22 YouTube has a firm place in the current classroom. From Khan Academy’s videos to YouTube EDU and beyond, there’s a reason all these videos are finding a home in schools. In an effort to help keep the ball rolling, Google just launched a set of 10 interactive lessons designed to support teachers in educating students on digital citizenship. Google (which owns YouTube) built the lessons to educate students about YouTube’s policies, how to flag content, how to be a safer online citizen, and protect their identities. Below is a list of lessons, and the recommended flow for delivery. Or you can download the Full Teacher’s Guide or the Full Set of Slides in PDF . The killer feature for this curriculum is the extra features that come with each video. Category: Videos Tags: digital citizenship , guide , How To , presentations , Videos You may also like Second Grader Shows How She Uses Evernote For Fluency 4 Comments

Art & Truth Art and Truth Though not traditionally a major topic within aesthetics, the relationship between truth and works of art is of considerable interest in the context of Theory of Knowledge. There are those who argue that artists (and we are still using the word “art” in a wide sense to include literature, music, and other art-forms) have a special responsibility to convey the truth. Few would deny the power of language to convey a feeling or an idea. Nevertheless, the claim that art can ‘convey the truth’ needs some examining. The claim that art ‘tells the truth’ surely means more than that true statements are made in literature or that simple factual statements can be correctly deduced from observing a paintrng? What about a photograph or a film? Even if the greatest of care were to be taken in painting a fair, unbiased picture, is it possible to do so? Why, in any case, is there a need to find truth in art?

Bloom's Taxonomy Blooms Digitally 4/1/2008 By: Andrew Churches from Educators' eZine Introduction and Background: Bloom's Taxonomy In the 1950's Benjamin Bloom developed his taxonomy of cognitive objectives, Bloom's Taxonomy. Bloom's Revised Taxonomy In the 1990's, a former student of Bloom, Lorin Anderson, revised Bloom's Taxonomy and published this- Bloom's Revised Taxonomy in 2001.Key to this is the use of verbs rather than nouns for each of the categories and a rearrangement of the sequence within the taxonomy. Bloom's Revised Taxonomy Sub Categories Each of the categories or taxonomic elements has a number of key verbs associated with it Lower Order Thinking Skills (LOTS) Higher Order Thinking Skills (HOTS) The elements cover many of the activities and objectives but they do not address the new objectives presented by the emergence and integration of Information and Communication Technologies into the classroom and the lives of our students. Bloom's digital taxonomy map Remembering Understanding Applying Analysing Evaluating

S.O.S. for Information Literacy The Big Chandra Picture The Big Chandra Picture In more than a decade of operation, NASA's Chandra X-ray Observatory has transformed our view of the high-energy Universe with its ability to make exquisite X-ray images of star clusters, supernova remnants, galactic eruptions, and collisions between clusters of galaxies. As Chandra expands the realm of the known, it continues to raise new questions and point the way for future exploration. This photo blog presents some of Chandra's most spectacular images in a large and shareable format. Follow Chandra on Twitter 03 Apr 2014 El Gordo: This is a composite image of X-rays from Chandra and optical data from Hubble of the galaxy cluster ACT-CL J0102-4915, located about 7 billion light years from Earth. 20 Mar 2014 DEM L241: When a massive star runs out fuel, it collapses and explodes as a supernova. 05 Mar 2014 RX J1131-1231: A quasar located about 6 billion light years from Earth. 04 Mar 2014 18 Feb 2014 06 Feb 2014 23 Jan 2014 08 Jan 2014 04 Dec 2013 20 Nov 2013 28 Oct 2013

lets get started - scan me Ten Terrific Mind Mapping and Brainstorming Tools Today, I am running a workshop about using mind mapping and brainstorming tools to help students meet some of the Common Core standards in English Language Arts. Below are some of the tools that we will be using today. On a related note, if you're interested in having me come to your school or facilitate a virtual workshop, please click here for more information. Popplet is a great service that combines the best of online sticky note services like Wallwisher with collaborative mind mapping functions. Text 2 Mind Map offers a great way to turn your typed outlines into mind maps. Realtime Board is a new online tool for hosting online, collaborative brainstorming sessions. Inkflow is an iPad app for visual thinkers who like to sketch to process what they're hearing, seeing, and learning. iBrainstorm is a free brainstorming application for the iPad and the iPhone. SyncSpace is a collaborative whiteboard app available for iPad here and for Android here.

Creative grammar lessons for primary pupils Grammar is always a hot topic, and it seems likely that a greater emphasis will be placed upon it in the forthcoming revision of the National Curriculum. It is one of those subjects that either provokes a heavy groan, or releases a flood of complaints about how young people make so many grammatical errors. There is, of course, no evidence that the latter is true! Grammar has had a place within English/literacy, both in the National Curriculum and the National Literacy Strategy, but its role has never been clear. Internationally, in English-speaking countriesthere are many similar discussions, particularly about whether teaching grammar has any impact on learners’ writing. Don’t make grammar terms the focus The potential benefit of using grammar when teaching writing is that it makes visible what writers do and shows them some of the possibilities that are open to them as writers. • Exploring how place adverbials can establish setting e.g. Reading like a writer 1. 2. 3. Writing talk 1. 2.

this is where to tweet your thoughts How To Make Students Better Online Researchers I recently came across an article in Wired Magazine called “ Why Kids Can’t Search “. I’m always interested in this particular topic, because it’s something I struggle with in my middle and high school classes constantly, and I know I’m not alone in my frustrations. Getting kids to really focus on what exactly they are searching for, and then be able to further distill idea into a few key specific search terms is a skill that we must teach students, and we have to do it over and over again. We never question the vital importance of teaching literacy, but we have to be mindful that there are many kinds of “literacies”. In the past, we spent a lot of time in schools teaching kids how to do library research, and how to use a variety reference materials like dictionaries, encyclopedias, microfiche, card catalogs, public records, anthologies, and other sources too numerous to recall. The real answer? SPEND TIME teaching your kids the digital literacy skill of proper searching. 1. 2. 3. 4.

A Glance at the Earliest Universe +Enlarge image Cosmological inflation, the hypothesis that the early Universe underwent an extremely rapid expansion, is a popular paradigm in modern cosmology. The theory successfully explains how quantum mechanical fluctuations of the vacuum, starting about seconds after the big bang, could have given rise to the large-scale structure of our Universe, leading to predictions that have been confirmed by a range of cosmological observations. However, inflationary cosmology cannot be the ultimate theory of the Universe. If one projects the Universe backward in time, it gets so hot and dense that the laws of physics on which inflation is based (classical general relativity) break down. In the so-called Planck era, lasting up to one Planck second () after the big bang, the force of gravity would have reached values comparable to the other fundamental forces. What conditions existed prior to inflation and to what extent do they affect the predictions of the inflationary model? References I.