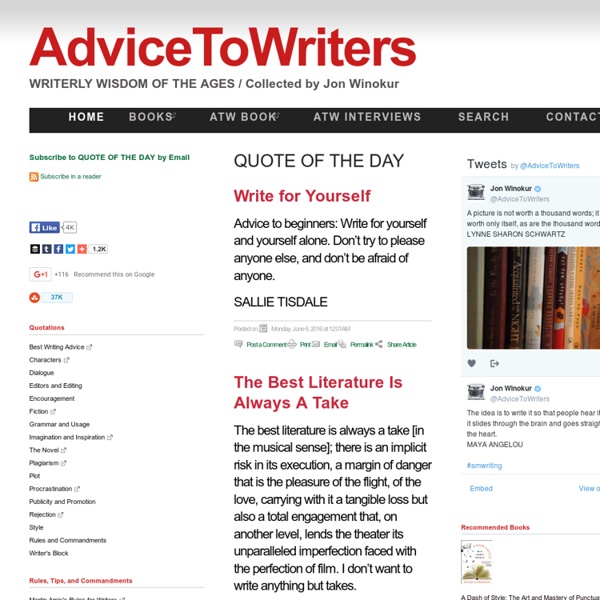 1. Take a pencil to write with on aeroplanes. Pens leak. But if the pencil breaks, you can't sharpen it on the plane, because you can't take knives with you. Therefore: take two pencils. 2.

A Long, Lonely Road: Advice to New Writers By David Brin, Ph.D. Writing is a worthy calling -- one that can, at times, achieve great heights that ennoble the human race. Actually, I believe writing was the first truly verifiable and effective form of magic. Think of how it must have impressed people in ancient times!

The Ultimate Guide to Writing Better Than You Normally Do. Writing is a muscle. Smaller than a hamstring and slightly bigger than a bicep, and it needs to be exercised to get stronger. Think of your words as reps, your paragraphs as sets, your pages as daily workouts. 102 Resources For Fiction Writing UPDATE 1/10: Dead links removed, new links added, as well as Revision and Tools and Software sections. Are you still stuck for ideas for National Novel Writing Month? Or are you working on a novel at a more leisurely pace? Here are 102 resources on Character, Point of View, Dialogue, Plot, Conflict, Structure, Outlining, Setting, and World Building, plus some links to generate Ideas and Inspiration. Also, I recommend some resources for Revision and some online Tools and Software. Too many links?

The 6 steps to World-Changing Writing In all the writing I do, I’ve puzzled out that there are six basic steps – not just for changing the world through writing, but for writing in general. So I wrote up a present for you! And asked Pace to make it pretty (and to help me with formatting this post for you). This is a no-catch, easy-to-get, free downloadable ebook for you to snag, read, and share with whomever you like.

12 Absolutely and Insanely Essential Utilities For Programmers In every era in recent times there has been one profession that for a short while you could enter without formal training. Autodidacts in the 19th century could read the law without recourse to formal education (see Abe Lincoln). In the early 20th century it was aviation. For a short while in the 1980s and early 1990s, it was computing, thanks to the release of the Apple IIe, the IBM PC and the Mac. Were it not for that Window® of opportunity, I hate to think what would have become of me. (Hey buddy, can you spare a dime?)

Annual Writing in Place Conference Hub City will host the 15th annual Writing in Place conference on the campus of Wofford College July 10-12, 2015. This year's conference will feature lots of new workshops, happy hour at the Hub City Bookshop, faculty readings, and more! Registration is now open. Published novelists, poets, essayists, and literary critics lead a series of workshops over three days that include intense instruction, challenging exercises, and an opportunity for feedback. Registrants must sign up for one genre: poetry, fiction, or creative nonfiction.

Warren Buffett’s 10 Steps To Better Report Writing Buffett writes like he speaks. Direct, immediate and without pretension. “For more than forty years, I’ve studied the documents that public companies file. Too often, I’ve been unable to decipher just what is being said or, worse yet, had to conclude that nothing was being said. If corporate lawyers and their clients follow the advice in this handbook, my life is going to become much easier. “ Warren Buffet In 2002, I found the Plain Language writing technique almost by accident.

Bird by Bird: Anne Lamott’s Timeless Advice on Writing and Why Perfectionism Kills Creativity by Maria Popova “Perfectionism is the voice of the oppressor, the enemy of the people. It will keep you cramped and insane your whole life.” Anne Lamott’s Bird by Bird: Some Instructions on Writing and Life (public library) is among my 10 favorite books on writing — a treasure trove of insight both practical and profound, timelessly revisitable and yielding deeper resonance each time.