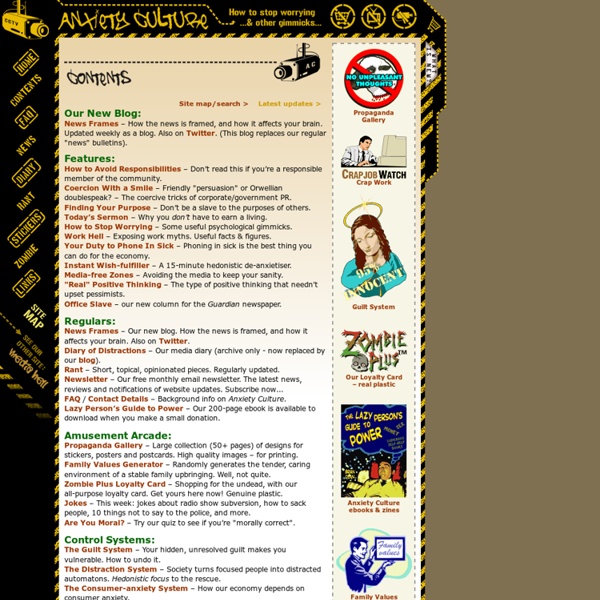 Our New Blog: News Frames – How the news is framed, and how it affects your brain. Updated weekly as a blog. Also on Twitter. (This blog replaces our regular "news" bulletins). Features: How to Avoid Responsibilities – Don’t read this if you’re a responsible member of the community. Coercion With a Smile – Friendly "persuasion" or Orwellian doublespeak? Regulars: News Frames – Our new blog. Amusement Arcade: Propaganda Gallery – Large collection (50+ pages) of designs for stickers, posters and postcards. Control Systems: The Guilt System – Your hidden, unresolved guilt makes you vulnerable. Media-related: BBC's misleading crime headlines – We noticed a pattern of crime misreporting on BBC News Online – a consistent cherry-picking of "rises" in crime (which often weren't rises at all). Miscellaneous: Today's Sermon II – On how to distinguish between absolute blame and practical blame, to avoid hysterical blaming frenzies.

Night Hells (Night Terrors) and Hearing Voices This report is Copyright. All rights reserved. You are welcome to link to this page , but please do NOT place copies of it on other websites. If you find it posted on any site other than www.clarity-of-being.org , please report the fact to me . Computer Tricks The term ‘geek’, once used to label a circus freak, has morphed in meaning over the years. What was once an unusual profession transferred into a word indicating social awkwardness. As time has gone on, the word has yet again morphed to indicate a new type of individual: someone who is obsessive over one (or more) particular subjects, whether it be science, photography, electronics, computers, media, or any other field. A geek is one who isn’t satisfied knowing only the surface facts, but instead has a visceral desire to learn everything possible about a particular subject.

Part 1 of Episode 1: “The Unexamined Life Is Not Worth Living.” Podcast: Play in new window | Download (Duration: 42:11 — 38.6MB) Discussing Plato’s “Apology.” This reading is all about how Socrates is on trial for acting like an ass and proceeds to act like an ass and so is convicted. Critical Thinking On The Web Top Ten Argument Mapping Tutorials. Six online tutorials in argument mapping, a core requirement for advanced critical thinking.The Skeptic's Dictionary - over 400 definitions and essays. Night terror A night terror, sleep terror or pavor nocturnus is a parasomnia disorder, causing feelings of terror or dread, and typically occurring in the first few hours of sleep during stage 3 or 4 non-rapid eye movement (NREM) sleep.[1] Night terrors tend to happen during periods of arousal from delta sleep, also known as slow wave sleep.[2][3][4] During the first half of a sleep cycle, delta sleep occurs most often, which indicates that people with more delta sleep activity are more prone to night terrors.[3] However, they can also occur during daytime naps.[5] Night terrors are largely unknown to most people, creating the notion that any type of nocturnal attack or nightmare can be confused with and reported as a night terror.[4] Associated features[edit] The universal feature of night terrors is inconsolability.[8] During night terror bouts, patients are usually described as 'bolting upright' with their eyes wide open and a look of fear and panic on their face.

Autism Apps Lisa and Grace Domican use the Grace app. Few can legitimately boast that an iPhone app changed their life but for 10-year-old Grace Domican, unable to speak due to autism, the touchscreen phone has given her a voice for the first time. Her mother, Lisa Domican, created a picture-based iPhone application to help her communicate and the tool was so successful she is now trialling it in a school for autistic children in Ireland. Domican, who was born in Australia and lived here until she moved to Ireland in 2001, is also planning to provide it to schools in Australia and is selling both iPhone and iPad versions on the iTunes App Store.

Dark triad The dark triad is a group of three personality traits: narcissism, Machiavellianism and psychopathy.[1][2][3] The use of the term "dark" reflects the perception that these traits have interpersonally aversive qualities:[4][5][6][7] Narcissism is characterized by grandiosity, pride, egotism, and a lack of empathy.[8]Machiavellianism is characterized by manipulation and exploitation of others, a cynical disregard for morality, and a focus on self-interest and deception.[9]Psychopathy is characterized by enduring antisocial behavior, impulsivity, selfishness, callousness, and remorselessness.[10] All three traits have been associated with a callous-manipulative interpersonal style.[11] Jakobwitz and Egan carried out a factor analysis and found agreeableness strongly dissociated with these traits, and other factors, such as neuroticism and a lack of conscientiousness, associated with some traits.

Lateral Thinking Problems - Semantics Lateral thinking problems that require you to pay close attention to the exact wording of the problem. 1. A woman gave natural birth to two sons who were born on the same hour of the same day of the same month of the same year. But they were not twins and she had no access to a time machine. 5 Real Ways to Get High Straight Out of Science Fiction Eventually technological advancement comes to every profession even if that profession is just burn-out, hippy, or full-time junkie. Its been a long time coming, but apparently science has finally gotten the message and realized that even drug abuse can be made better, faster, and stronger. With that in mind, here are some new, readily available drugs that seem more like science fiction than pharmaceutical fact.