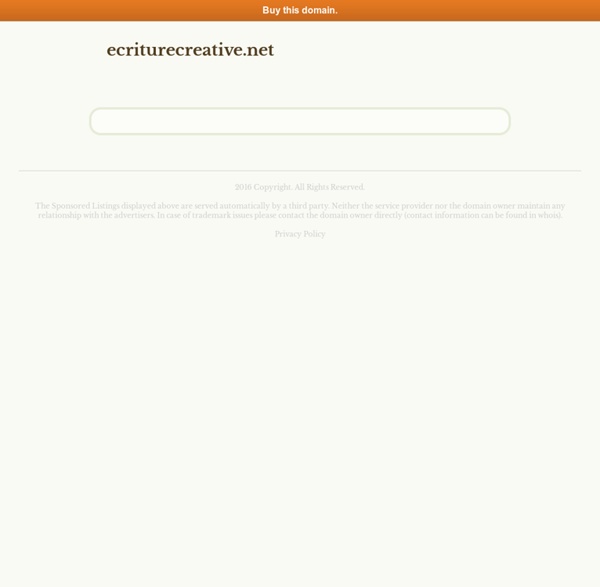 Making Good Lessons Great: Incorporating Multiple Iintelligences and Creative Thinking into Everyday Lesson Plans « clearings by Betty K. Wood and Andrew L. Hunt, University of Arkansas at Little Rock Sarah C. The Periodic Table of Storytelling By: John Rhodes Posted on: September 24, 2013 Posted in: Blog Click to enlarge this fun chart of storytelling elements. Agree, or disagree? Any elements or tropes you would add? Free writing Free writing is a prewriting technique in which a person writes continuously for a set period of time without regard to spelling, grammar, or topic. It produces raw, often unusable material, but helps writers overcome blocks of apathy and self-criticism. It is used mainly by prose writers and writing teachers.[1][2] Some writers use the technique to collect initial thoughts and ideas on a topic, often as a preliminary to formal writing. Free writing is not the same as automatic writing. Unlike brainstorming where ideas are simply listed, in freewriting one writes sentences to form a paragraph about whatever comes to mind. History[edit]

“The 13 Rules for Creating a Prestige TV Drama” With tongue planted in cheek, Vulture provides this: Warning: The following post contains spoilers for Breaking Bad, Dexter, Homeland, The Wire, The Sopranos, House of Cards, The Walking Dead, The Americans, Justified, Boardwalk Empire, Sons of Anarchy, True Blood, Lost, and Game of Thrones . Here’s the list: Rule 1: Start with an anti-hero. Rule 2: Give him a family. Rule 3: Set your show at the end of an era. Write a Novel in a Month From Wired How-To Wiki Photo by Valeriana Solaris/Flickr/CC November is National Novel-Writing Month. The Creative Thought Process - Part One One of the big parts of being an Event Designer is the creation of an event. By this I mean the ability to take what your client says to you and translate that into something amazing, dazzling, inspiring and ultimately something that represents what your client had in mind. I say that with tongue in cheek as most of our clients don’t actually know what they want and that is where you come in. They may have a product they wish to launch, a conference they want to spice up or even an awards presentation that needs that extra something. Whatever it is nine times out of ten they really only have the glimmer of an idea and the actual reality of it is merely wishful thinking. So, as the designer how do you take your client’s mumblings and musings and turn them into a spectacular event.

What they don’t teach you in Creative Writing 101 There are rules with writing. I’m sure you know that. In my early twenties, I studied creative writing part-time for eighteen months at the Institute of Fine Art in Brisbane, Queensland. We started out with a class of around forty enthusiastic hopefuls. Each week there would be less and less attendees, until only six of us remained. I think it works something like that in real life too. Peter's Evil Overlord List This Evil Overlord List is Copyright 1996-1997 by Peter Anspach. If you enjoy it, feel free to pass it along or post it anywhere, provided that (1) it is not altered in any way, and (2) this copyright notice is attached. This Evil Overlord List grew out of the exchanges on what is now the Star Trek mailing list "shields-up@spies.com", beginning in 1994 (when it was still "startrek@cs.arizona.edu"). We were kicking around cliches that appeared on "Deep Space 9" at the time, and I started to compile a list of classic blunders they were making. The list came to about 20 or so items. In 1995, I decided to try to make it into a Top 100 List.