How and Why to Teach Your Kids to Code 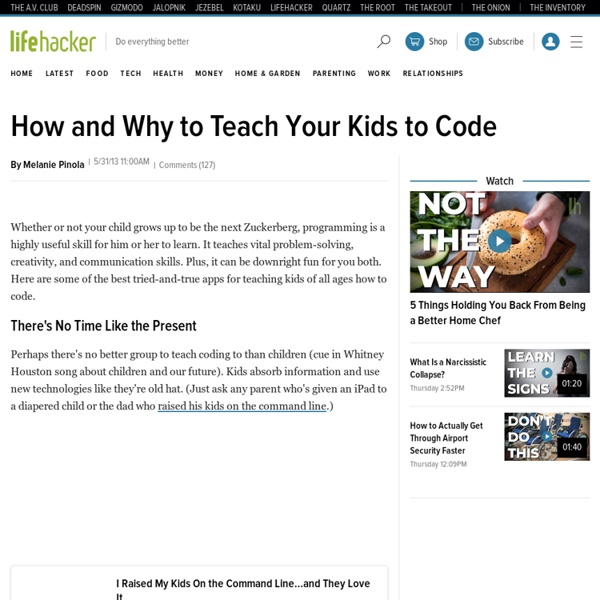 Cargo-Bot – iPad The first game programmed entirely on iPad® Be Logical. Play Cargo-Bot Presenting Cargo-Bot. The first game programmed entirely on iPad using Codea™ Get it for free on the App Store. Cargo-Bot is a puzzle game where you teach a robot how to move crates. It features 36 fiendishly clever puzzles, haunting music and stunning retina graphics. Built with Codea Cargo-Bot is the first game on the App Store developed using Codea, an iPad app for rapidly creating games and simulations. Get Codea on the App Store. Cargo-Bot was developed by Rui Viana using Codea. Fred Bogg coded the entire music engine using Codea's sound API, as well as composing the Cargo-Bot score. Safe search engines for kids? Reader Q+A at Cool Mom Tech What’s the best search engine for kids, in your experience? -via Twitter Keeping kids safe online should be a huge priority for parents. When it comes to kid-safe search, there are actually a lot of good options out there. Since you didn’t specify what age range we’re talking about, I’ll cover a few options. Safe Search For Young Kids There are some great search engines that you can bookmark as your kids’ own versions of Google. Kidzui (above) is a great resource for pre-K through early elementary school-aged kids. Another kid-friendly search engine is Kidrex. Safe Search For Older Kids When you get into the tween years and beyond, I’d really recommend using Internet filters to ensure that when your kids are using the same search engine you use, they are still protected from the creepy stuff out there. On top of that, we have covered smart internet safety options for kids here before, like Net Nanny which works on both tablets and PCs. 9Share

Gamestar Mechanic ages 7-14 years 12 Things Students Should Never Do on Social Media The last thing young people want is another set of rules. But these days, social media comes with great responsibility, whether you're just starting high school or finishing up college. The fact is, irresponsible social media conduct could potentially ruin your education and negatively impact your career, not to mention hurt others in the process. (And we're not just talking kids, either.) But most of those consequences are preventable, often with just a little foresight. We've pinpointed 12 social media mistakes that students should avoid at all costs, because after all, it's never as simple as "be responsible." Please head to the comments below to add your own contributions and advice for young adults on social media. 1. Granted, high school and college students experiment with many activities and substances. Once or twice per year, perform a thorough review of the information and content accessible on your social media profiles. 2. Check your school's policy on bullying. 3. 4. 5. 6.

Edmodo November 2016 Sometimes it is easier to annotate an Assignment to give your feedback rather than writing lengthy comments. It is now possible to Annotate a Student Assignment through Office Online. September 2016 You can now add Spotlight Apps to your App Launcher. July 2016 Notes that you send to your Groups will automatically populate in the Posts sections of the Parent account! June 2016 Students and Teachers can now add attachments to replies! The Edmodo Store has moved into Spotlight. May 2016 Threaded replies and Likes to replies! April 2016 Quiz Sharing! Collaboration on Edmodo just keeps getting better! March 2016 Topics Interested in following a specific Topic? February 2016 Sign up or Log In with Office 365 and Google You can now use either your Office 365 for business account, or your Google account to sign up or log in to Edmodo. January 2016 Updates to Assignments: Request an Assignment Resubmission: Did one of your Students forget to attach a file to his or her Assignment? Library 2.0

The Grandmaster Experiment The world's first female grandmaster was ready to deliver her regular Thursday-night lecture. Susan Polgar was perfumed, coiffed, made-up and dressed in a sleek black pantsuit, an elegant contrast to the boys and young men hunched over their boards in her Queens, New York, chess club. "I have a special treat," Susan, 36, announced in her gentle Hungarian accent. "Tonight, everyone will get to play me." Blitz chess it was—each opponent received five minutes on his clock to Susan's one. When Susan was the age of many of her students, she dominated the New York Open chess competition . In 1991, when Susan was 21, she became the first woman ever to earn the designation Grandmaster, the World Chess Federation's title for top-ranked players. Judit, who is now the top-ranked woman and eighth overall player in the world, would go on to win a match in 2002 against reigning champion Garry Kasparov, who has said that "women by nature are not exceptional chess players."

CS Fundamentals for grades K-5 Our Computer Science Fundamentals courses have about 15 lessons that may be implemented as one unit or over the course of a semester. Students create computer programs that will help them learn to collaborate with others, develop problem-solving skills, and persist through difficult tasks. They will study programming concepts, computational thinking, digital citizenship, and develop interactive games or stories they can share. If you like teaching CS Fundamentals, invite other teachers by sharing this handout. Our curriculum aligns to the newly revised 2017 CSTA standards and is available at no cost for anyone, anywhere to teach. Read more about our curriculum values. No worries! For students new to computer science, each course begins with a grade-appropriate entry point and structured ramp-up of concepts. If you've been teaching Courses 1-4 and want to know how to transition to teaching Courses A-F, check out our Transition Guide. Recommended for Kindergarten (Supports pre-readers)

How to Make Forms, Surveys, and Quizzes in Google Docs and Spreadsheets or Google Apps Want to find out what your coworkers want for lunch? Need to get feedback for your training session? Want to find out which movie your friends want to see on Saturday? Forms in Google Docs are easy to create. Forms feed their results directly into a spreadsheet in Google Docs. Product | Naiku Better Assessment, Better Learning Know if students “got it” before they even step out of the room. Accelerate Learning with Formative Assessment Stop waiting days or weeks to know if your students know (or don’t know) critical concepts! Use Naiku to identify student knowledge gaps and address them immediately with informed instruction. Automatic Scoring Student assignments are scored automatically for a variety of item types, including T/F, multiple choice, matching, and short answer. Built-in Reports Reports are immediately available illustrating class and student performance by standard. Gradebook Integration Scores can be directly sent to your gradebook, when you wish. Instant Student Response With Quick Question, teachers can check for understanding anytime with real-time polling – no item preparation is required! Collaborate on Common Assessment Don’t live on an island – with Naiku, teacher collaboration is fundamental. Share Search Common Assessments Engage with Better Assessment No problem!

Code.org CEO Hadi Partovi Podcast Interview with Kara Swisher It’s easy to mistake computer science for programming, and Code.org CEO Hadi Partovi says that even the kids who will never work for Google or Microsoft should be educated in digital literacy. Partovi joined Re/code Executive Editor Kara Swisher on the latest episode of “Re/code Decode,” where he argued that we should start imparting the basics of computer science to kids in elementary school. “We don’t teach biology or chemistry to kids because they’re going to become surgeons or chemists,” Partovi said. “We teach them about photosynthesis and that water is H2O, or how lightbulbs work, just to understand the world around us. You don’t use any of it, but you do on a day-to-day basis use public-key encryption, and the average American has absolutely no idea what that is.” Vjeran Pavic for Re/code He explained that reforming education to introduce digital concepts has been, unsurprisingly, easier said than done.

Top 10 Ed-Tech Startups of 2012 It probably goes without saying, but I’ll type it out anyway: 2012 was an incredible year for education technology startups. Launches. Updates. Funding. Acquisitions. With all that’s happened this year, making a list of the “top” new education technology startups was more challenging than ever before – least of which because there were a lot more companies to choose from. How I Chose But I’ve written a “Top Startups” post for two years in a row (See: 2010, 2011), so I guess it's part of my end-of-year writing traditions now. Once again, I’m only highlighting here those that were founded and/or launched in 2012. … Meanwhile, I’ve complicated things by expanding my categorization of “startup” a tad to include some initiatives from outside the high-risk, high-growth, for-profit business world. I’m also fudging a bit on the number here. Whatever. tl;dr here’s my list, in no particular order… Full disclosure: I got to hang out with Udacity founder Sebastian Thrun a bit last week.