Teaching Coding: Where Do You Start? 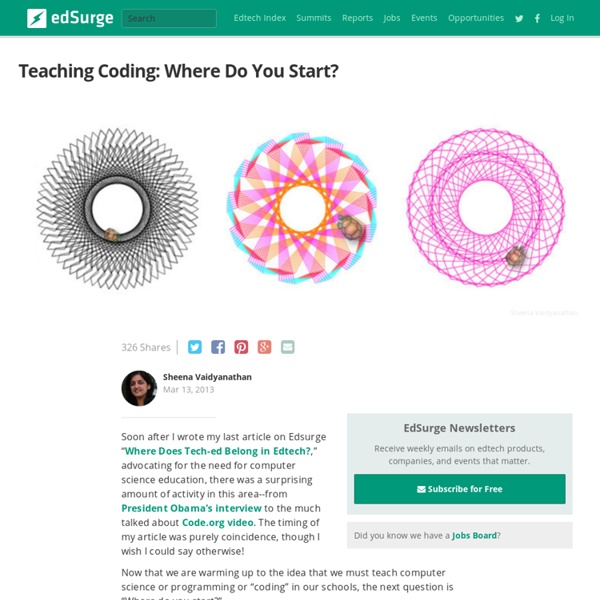 EdSurge Newsletters Receive weekly emails on edtech products, companies, and events that matter. Soon after I wrote my last article on Edsurge “Where Does Tech-ed Belong in Edtech?,” advocating for the need for computer science education, there was a surprising amount of activity in this area--from President Obama’s interview to the much talked about Code.org video. The timing of my article was purely coincidence, though I wish I could say otherwise! Now that we are warming up to the idea that we must teach computer science or programming or “coding” in our schools, the next question is “Where do you start?” The advocacy channels and computer science organizations (CSTA, NCWIT, CSEdWeek, Code.org) give a number of helpful links to curriculum guides, tools, online programming courses and much more. I decided to look for a starting point based on what I have seen work again and again in my programming classes. While searching for this answer, I realized that it was actually obvious. Related:  Teach Coding

ScratchJr: Coding for kindergarten Can children learn to code at the same age they’re learning to tie their shoes? That’s the idea behind ScratchJr, a free iPad app released this week by researchers at the MIT Media Lab, Tufts University, and Playful Invention Company (PICO). With ScratchJr (scratchjr.org), children ages five to seven can program their own interactive stories and games. In the process, they learn how to create and express themselves with the computer, not just interact with it. "As young children code with ScratchJr, they develop design and problem-solving skills that are foundational for later academic success," said Marina Umaschi Bers, professor in the Eliot-Pearson Department of Child Study and Human Development at Tufts, and director of the Tufts’ Development Technologies research group, which co-developed ScratchJr. "And by using math and language in a meaningful context, they develop early-childhood numeracy and literacy."

Learn To Code, Code To Learn Is it important for all children to learn how to write? After all, very few children grow up to become journalists, novelists, or professional writers. So why should everyone learn to write? Of course, such questions seem silly. People use writing in all parts of their lives: to send birthday messages to friends, to jot down shopping lists, to record personal feelings in diaries. I see coding (computer programming) as an extension of writing. The recent surge of interest in learning to code, reflected in sites like codecademy.com and code.org, has focused especially on job and career opportunities. But I see much deeper and broader reasons for learning to code. Six years ago, my research group at the MIT Media Lab launched the Scratch programming language and online community in an effort to make coding accessible and appealing to everyone. We’ve been amazed with the diversity and creativity of the projects. Scratch community members also begin to see the world in new ways.

Teach Your Kids to Code: 6 Beginner's Resources for Parents Introducing computer programming to your kids can be a challenge, especially for those who aren’t familiar with the nuances of code. Fortunately, in the last few years, a number of apps, software, and guides have been produced that make the often-complex subject of computer coding easy to grasp for young learners. So where to begin? These are a few resources that parents can share with their kids to help them start learning about programming. Programming Tutorials From Made With Code by Google: Google's Made With Code project has a mission of encouraging girls to pursue careers in computer science. The Made With Code projects are easy to follow, and if your kids are completely new to coding, don't fret. Inspiring Articles About Kids Learning to Code Still looking for some ideas? Coding Organizations for Kids For the non-coding parents, it can be difficult to know where to begin.

Creative Computing 7 units44 activitiesremixing encouraged download the Scratch 3.0 version of the guide> help learnerscreate new worldswith computing download the Scratch 3.0 version of the guide an introductorycomputing curriculumusing Scratch Scratch 3.0 is here! In celebration of Scratch 3.0, we are hard at work developing a new version of our Creative Computing Curriculum Guide to be released in early 2019! Download 'Coding Nation' Chronicles 300 Ways to Pick Up Programming | EdSurge News EdSurge Newsletters Receive weekly emails on edtech products, companies, and events that matter. How many ways can you learn to code? Try more than 100101100--or, in translation, more than 300. That's according to a report, "Coding Nation," fresh from the digital press at the Kapor Center for Social Impact. New high-tech jobs are growing three times faster than the rest of the economy, notes the Kapor Center report. The report has an introductory note and shout out to Globaloria from Jennifer Arguello, tech writer for NBC Latino.com and an advisor to the Kapor Center. A growing number of business leaders are urging American kids to learn to code. "Coding Nation" offers both good and teeth-gritting news, depending on your point of view: Cedric Brown, Managing Partner at Kapor and overseer of the project, shared with EdSurge that what “started as an internal purpose for internal knowledge” became a resource that the Kapor Center wanted to share more broadly.

15+ Ways of Teaching Every Student to Code (Even Without a Computer) According to Code.org, 90 percent of parents in the U.S. want their children to learn computer science—it will be crucial for many jobs in the near future—but only 40 percent of schools teach it. Critics claim that it is mainly the more affluent schools that offer computer science courses, thus denying those who attend poorer schools the chance to learn necessary skills. A focus on STEM is not enough: Code.org also reports that while 70 percent of new STEM jobs are in computing, only 7 percent of STEM graduates are in computer science. In my opinion, parents of every student in every school at every level should demand that all students be taught how to code. With the following resources, you can teach programming to every student and every age. Teaching Coding to the Youngest Students Tynker Games: Use these age-appropriate games to teach your elementary students coding concepts. Teaching Coding to Kids 8 and Up Hopscotch is a free iPad app for upper elementary and above.

Code Kingdoms Game Design 2015 Hi! We are from Tower Hill and we are the Digital Game Design (CodeMasters) class of 2014-2015! This year we worked on projects involving different code languages, primarily Javascript and HTML (which this website is using). Scratch Games Khan Games You can visit our first semester projects at... Ratbait Studios

Should every school class be a computer coding class? This spring, at St. Anne’s-Belfield School in Charlottesville, Virginia, the fifth-grade Spanish class programmed computers to produce bilingual, animated photo albums. The seventh-grade science class rejiggered the code behind climate models. The first-graders programmed robots to run mazes. And that’s just for starters. “We’d like everybody to be more comfortable with computer science, because it’s running our lives now, and because it enhances what’s possible in the classroom,” said Kim Wilkens, a technology teacher at St. They’re not alone. One of the biggest challenges for computer science advocates is that many kids simply don’t see why coding matters, in a world of preloaded software and the vast resources of the Internet. While enrollment in Advanced Placement computer science, a Java coding course, has been growing rapidly, the numbers pale in comparison to most other STEM AP courses. But are stand-alone computer science courses enough? Of course, that’s easier said than done.

Code Combat Give Your Kids a Most Excellent Summer Coding Adventure | EdSurge Guides For a new generation of students growing up in a digitally-connected century, all roads lead to code. Coding is the new literacy. It will not replace foreign languages, but it will be the global vernacular for understanding how technologies work. Unlike the Trix cereal, coding and computer science aren't just for kids. We all read to our children from a young age and encourage them to write. Not every coding job involves working in a blue chip tech company or Silicon Valley startup. And contrary to public perception, learning to code doesn't necessarily require hammering away at a keyboard, eyes affixed on some text editor. In this collection of articles below we share different perspectives on coding movement. It's summertime...and the coding’s easy.