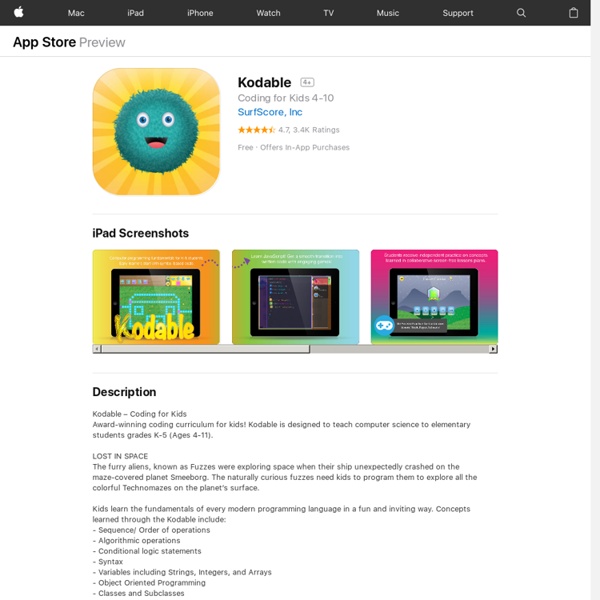 Description Kodable – Programming Curriculum for ElementaryThis award winning game and accompanying curriculum, is designed to teach the basics of computer coding to kids 5 and up. LOST IN SPACEThe furry aliens, known as Fuzzes were exploring space when their ship unexpectedly crashed on the maze-covered planet Smeeborg. The naturally curious fuzzes need kids to program them to explore all the colorful Technomazes on the planet’s surface. ACCOMPANYING CURRICULUM (Common Core Aligned)Upload your roster for easy sign on, get lesson plans, and track what concepts and standards students are learning when you create a free account at Kodable.com. (Homeschool and Parent curriculum available as well) WHY CODE WITH KODABLE? Kids learn the fundamentals of every modern programming language in a fun and inviting way. ***In – App Purchase includes advanced concepts: - LOOPS: 30 more levels in Loopy Lagoon! ...More

Teaching Coding (For Teachers who Can't Code) According to a recent study by Code.org, the vast majority of schools in the US do not provide a rigorous computer science curriculum ( One skill that is critically ignored in schools is the actual coding of computers, with many computer science skills focusing instead on office skills like using Microsoft Word and Powerpoint. In fact, 90% of American schools don’t even discuss computer programming! While office skills are necessary, this neglect is a dangerous position for America’s students to be in. According to a recent poll by the US Department of Labor, computer science is one of the most rapidly growing job areas of the last decade, with well over 500,000 new job openings anticipated in the next ten years ( On top of this statistic, almost every job in America, even previously blue-collar jobs like manufacturing or auto repair, now requires some ability to handle and navigate computer programs. So what’s to be done?

Cargo-Bot – iPad The first game programmed entirely on iPad® Be Logical. Play Cargo-Bot Welcome, Inventors! App Inventor is a free, cloud-based service that allows you to make your own mobile apps using a blocks based programming language. You access App Inventor using a web browser (Chrome, Firefox, Safari). With these beginner-friendly tutorials, you will learn the basics of programming apps for Android devices. Kids must code on iPads An important 21st Century skill This post is about a topic and app close to my heart. Computer programming is the engine of modern life and dream maker for tens of thousands. More and more countries are introducing the subject as compulsory schooling at surprisingly young ages. The UK is introducing a national school programme in september this year whilst also funding yearofcode.org to increase momentum.

Teachers talk about TKP The TEACHERS resource section of the TKP site is organized as follows: General Topics for teachers on this site include the following: what we teach (i.e. which languages, software, IDEs, etc..) the Hour of Code is coming On Monday, October 14, 2013, Code.org announced the “Hour of Code," a campaign to introduce 10 million students to one hour of Computer Science. Live stream of the announcement Microsoft, Google, Apple, Amazon, Bill Gates, Mark Zuckerberg, Jack Dorsey Among Those Joining Campaign SAN FRANCISCO and SEATTLE – October 14, 2013 – Code.org, the non-profit dedicated to promoting computer science education, today announced a nationwide campaign calling on every K-12 student in America to join an "Hour of Code." The initiative asks schools, teachers and parents across the country to help introduce more than 10 million students of all ages to computer programming during Computer Science Education Week, December 9-15, 2013.

Simon Haughton's website: LOGO Programming I'm going to admit that the fourth lesson I do on LOGO is complicated - the understanding of the programming commands that is required is of a high level and any mistake made (even the tiniest one) will result in either commands not being executed properly or error messages popping up on screen. It is, however, a lesson which the children rose to the challenge of today and which they were extremely impressed with when they saw what on-screen patterns they had managed to produce by its end. The age-old saying "you only get out what you put in" was certainly true today!

12 Sites That Will Teach You Coding for Free There was a time when knowing how to program was for the geekiest of geeks. That’s not exactly the case today. As most entrepreneurs, freelancers and marketers will tell you, learning how to program can help you succeed. Over the past year, I've been learning to code. It's helped me to become a much better entrepreneur -- I can dive in when my team needs to fix a few bugs on the site.