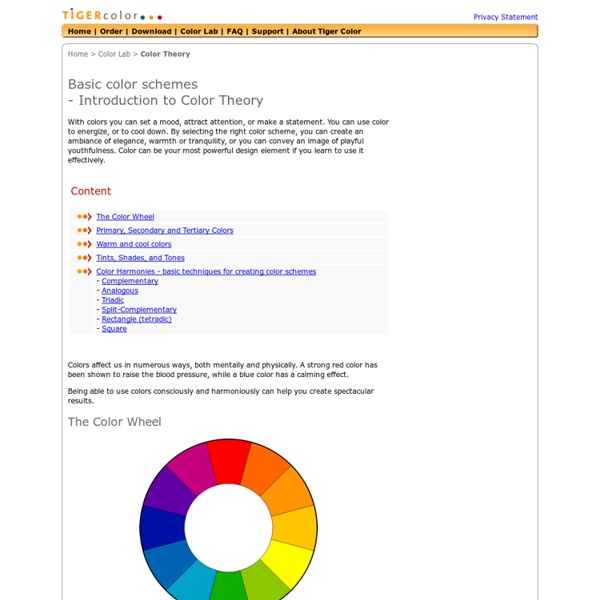 With colors you can set a mood, attract attention, or make a statement. You can use color to energize, or to cool down. By selecting the right color scheme, you can create an ambiance of elegance, warmth or tranquility, or you can convey an image of playful youthfulness. Color can be your most powerful design element if you learn to use it effectively. Colors affect us in numerous ways, both mentally and physically. A strong red color has been shown to raise the blood pressure, while a blue color has a calming effect. Being able to use colors consciously and harmoniously can help you create spectacular results. The Color Wheel The color wheel or color circle is the basic tool for combining colors. The color wheel is designed so that virtually any colors you pick from it will look good together. Traditionally, there are a number of color combinations that are considered especially pleasing. ColorImpact is designed to dynamically create a color wheel to match your base color.

The 8 classical dance styles of India! Article by AVIJIT DAS – Kuchipudi Dancer from Bangalore This is the first article from a serial about the classical Indian Dance Legends from the eight dance styles Bharatnatyam, Kathak, Kathakali, Kuchipudi, Manipuri, Mohinattyam, Odissi and Sattriya. Writen by the youngest professional Indian Kuchipudi Dancer Avijit Das from Bengaluru. Bharata Natyam is one of the eight Indian classical dance forms of India. Warm Hex Color Codes: Hexadecimal codes for named colors used in HTML page features The Hex Hub Warms: red orange brown yellow yellowgreen Need mobile? There is a mobile-friendly version of these color charts. Warms: red orange brown yellow yellowgreenYou are here How to make a plaster stamp? Since I was making a few moulds today, I remembered that I planned to make a tutorial on how to make a plaster stamp. Plaster stamps are not hard to make and they are great fun to use in your modelling projects. You can use regular stamps too but they are much softer so somtimes it's hard to use them for pressing into clay. Here is what you need: a rolling pin, a cutter, a stamp and a piece of plasticine.Plasticine is soft clay made of plastic so when you poor the plaster in there, it will come off very easily afterwards. Take a piece of plasticine and kneed it a little bit. Make a flat piece with a rolling pin.

Contracts: The Practical Side of Semantics We all recognize that we should be writing semantic code. Maybe, you're even using <section> or <em> correctly, and feel pretty good about yourself. But, are you also considering the implied contract that exists when you code? Let's imagine that a customer requests a text link, “See More,” which should reveal additional text on the page. Anton Chekhov Anton Pavlovich Chekhov (/ˈtʃɛkɔːf, -ɒf/;[1] Russian: Анто́н Па́влович Че́хов, pronounced [ɐnˈton ˈpavləvʲɪtɕ ˈtɕɛxəf]; 29 January 1860[2] – 15 July 1904)[3] was a Russian physician, playwright and author who is considered to be among the greatest writers of short stories in history. His career as a playwright produced four classics and his best short stories are held in high esteem by writers and critics.[4][5] Chekhov practiced as a medical doctor throughout most of his literary career: "Medicine is my lawful wife", he once said, "and literature is my mistress."[6] Along with Henrik Ibsen and August Strindberg, Chekhov is often referred to as one of the three seminal figures in the birth of early modernism in the theater.[7]

Comparison of layout engines (Document Object Model) The following tables compare DOM compatibility and support for a number of layout engines. Please see the individual products' articles for further information. Unless otherwise specified in footnotes, comparisons are based on the stable versions without any add-ons, extensions or external programs. For features that are fully supported (based on DOM Level 2 or DOM Level 3 modules that are under W3C Recommendation), an exact version number is given if it is certain that the feature was added in such version. DOM Level 0 and DOM Level 3 modules that are still under development are not included. Explanation of the tables[edit]

List of short stories by Anton Chekhov The following is an incomplete list of short stories and sketches by Anton Chekhov that are available in English. Lists of plays, novellas, and nonfiction by Chekhov can be found at: Anton Chekhov bibliography. Chronological list[edit] References[edit] Headless Functional Testing with Selenium and PhantomJS Let's build a system for performing functional tests on web applications, using Selenium and PhantomJS. The resulting system will allow us to write easy test scenarios in JavaScript, and test those scenarios both in real browsers and a headless simulator. The obvious downside to Selenium is that it requires a full graphical desktop for any and all tests. To begin, we have to choose a browser control or emulation engine to simulate an end-user. For a long time, the primary player in this field was Selenium, and it still is. Selenium allows for automated control of real browsers on real operating systems, which is its primary advantage: you can be absolutely certain that the tests represent reality as closely as possible.

Sterling Silver Assembled Cufflink Fitting, Round Bar With U Arm Plain Delivery Delivery methods We use fast and cost effective methods to ensure efficient and safe delivery of your order. We constantly review our carriers, and our delivery rates to ensure we offer a great delivery service at a competitive price.All our items are despatched by a network of carriers including Royal Mail, Yodel, Secure Mail (now known as DX Group), TNT, Fed Ex and DHL.Our current despatch rate is 97% next day delivery, overseas orders are dispatched same day as receipt, but are dependant on courier delivery time, typically 2- 5 days (dependant on region).We will do our best to despatch your order the same day, however for guaranteed same day despatch order before 3.00pm. If you want to track your parcel, please call 0845 100 1122.

Judges’ reports reveal Manipur’s AFSPA scars: The Hindu - Mobile edition A 15-year-old girl carrying lunch for her father to his workplace, a mother putting her baby to sleep at home, a woman waiting for her bus at a busy marketplace and spectators at a volleyball match are some of the innocent victims of rape and revenge killings by services personnel under the cover of the Armed Forces Special Powers Act (AFSPA) in Manipur. The details of the crimes allegedly committed by the Army, the CRPF and police commandos were revealed in a series of inquiry reports filed by serving and retired district judges, adding impetus to the cry for justice and repeal of AFSPA by activist Irom Sharmila. On August 8, 2014, the Manipur government handed over the reports to a Supreme Court Bench led by Justice Ranjan Gogoi. These inquiries, commissioned by the State government and the Guwahati High Court, date back to 1985. One report by M. Another report by C.