9 Nigerian Novels that Would Make Amazing Movies. Hollywood has always famously looked to literature for inspiration and adaptation material, but Nollywood seems to come up with a movie name (usually the reigning song or buzzword) and build from there. 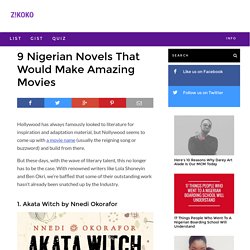 But these days, with the wave of literary talent, this no longer has to be the case. With renowned writers like Lola Shoneyin and Ben Okri, we’re baffled that some of their outstanding work hasn’t already been snatched up by the Industry. 1. Akata Witch by Nnedi Okorafor Can we hear Young Adult franchise, anyone? 2. This brilliant novel deals with polygamy, rape and domestic abuse in a Nigerian family. 3. Sozaboy is not only one of the most ambitious Nigerian novels ever written, it’s also one of the best. 4. Lagoon by Nnedi Okarafor (Strange Horizons Review)... - People of Color in European Art History. 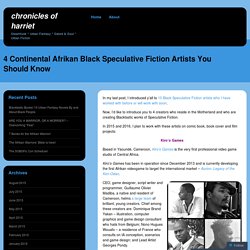 Now, I’d like to introduce you to 4 creators who reside in the Motherland and who are creating Blacktastic works of Speculative Fiction. In 2015 and 2016, I plan to work with these artists on comic book, book cover and film projects: Ancillary justice. MPoC Reviews: Throne of the Crescent Moon by... - People of Color in European Art History. Jamil Nasir. Karim BERROUKA. TUTUOLA Amos. This is the way the world ends. Again. ‘Fifth... - People of Color in European Art History. 10 Amazing Afrofuturism Authors Every Blerd Should Know - Blerds. 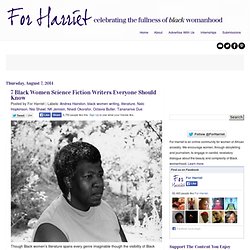 These women create work that not only speaks to their experiences but imagines new worlds and possibilities. Their stories take us on journeys. And while though the work may offer temporary moments of escape, when we return we're better able to interpret our own place in the world. Amazon.fr - Chants de l'espace - Samuel R. Delany, Stephan Martinière - Livres. Speculative fiction by writers of color. Speculative fiction is defined as science fiction, fantasy, and horror. 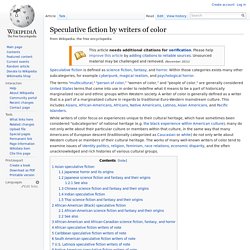 Within those categories exists many other subcategories, for example cyberpunk, magical realism, and psychological horror. 22 Contemporary Authors You Absolutely Should Be Reading. Griots: A Sword and Soul Anthology (9780980084283): Milton J. Davis, Charles R. Saunders: Books. Elegy Beach by Steven R. Boyett. Diversify your queer reads: 2014 books featuring... - People of Color in European Art History. Le blanc va aux sorcieres. 11 Sci-Fi Books Every Woman Should Read. Thinking of a science fiction reader may conjure up images of a nerdy white man clutching his worn copy of The Hobbit in one hand and a PlayStation controller in the other. 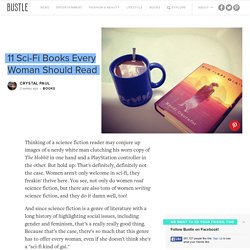 But hold up: That's definitely, definitely not the case. Women aren't only welcome in sci-fi, they freakin' thrive here. You see, not only do women read science fiction, but there are also tons of women writing science fiction, and they do it damn well, too! Raising Dion focuses on a black mother and her superhero son. In the comic book Raising Dion, Nicole, a widowed, black single mother, dedicates her energy to raising and chronicling the life of her son, Dion, a seven-year-old boy with a bevy of inexplicable superpowers. 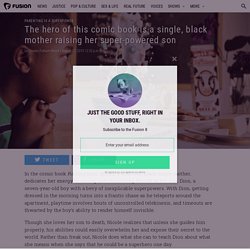 With Dion, getting dressed in the morning turns into a frantic chase as he teleports around the apartment, playtime involves bouts of uncontrolled telekinesis, and timeouts are thwarted by the boy’s ability to render himself invisible. Though she loves her son to death, Nicole realizes that unless she guides him properly, his abilities could easily overwhelm her and expose their secret to the world. Rather than freak out, Nicole does what she can to teach Dion about what she means when she says that he could be a superhero one day. Indigenous comics creators get a much-deserved showcase · Comics Panel. With a variety of writing and art styles, anthologies can often feel disjointed. 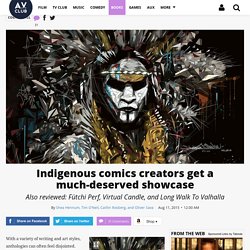 Thankfully, Moonshot: The Indigenous Comics Collection (Alternate History Comics) easily avoids most of the common issues with anthologies and delivers a mix of compelling stories at the same time. This isn’t the first time that Alternate History Comics has made a foray into a very specific kind of anthology; in 2014 the company published the Jewish Comix Anthology, an experience that inspired the pursuit of writers and artists to contribute to Moonshot. As editor Hope Nicholson points out in her foreword, there is no “single, homogenous native identity.” African Inspired Fantasy Comic, 'Chronicles of Piye', Set To Become A Video Game.

Check out upcoming video game ‘Piye Chronicles’, which will be released via Kemstar Media Inc. 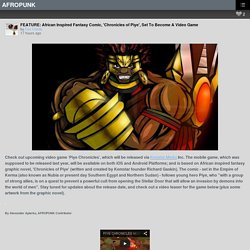 The mobile game, which was supposed to be released last year, will be available on both iOS and Android Platforms; and is based on African inspired fantasy graphic novel, 'Chronicles of Piye' (written and created by Kemstar founder Richard Gaskin). The comic - set in the Empire of Kerma (also known as Nubia or present day Southern Egypt and Northern Sudan) - follows young hero Piye, who "with a group of strong allies, is on a quest to prevent a powerful cult from opening the Stellar Door that will allow an invasion by demons into the world of men". Stay tuned for updates about the release date, and check out a video teaser for the game below (plus some artwork from the graphic novel). By Alexander Aplerku, AFROPUNK Contributor www.chroniclesofpiye.com. Black Comics by Black Authors: A List. I was thrilled to learn that Strange Fruit, a new comic by J.G. 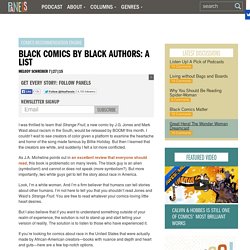 Jones and Mark Waid about racism in the South, would be released by BOOM! This month. I couldn’t wait to see creators of color given a platform to examine the heartache and horror of the song made famous by Billie Holiday. But then I learned that the creators are white, and suddenly I felt a lot more conflicted. 5 Impressive Facts About the First Black Woman Cartoonist - Blerds.

Dive into "Celflux: Reluctant Heroes" Let’s face it – getting into comics, while getting easier, is no small feat. 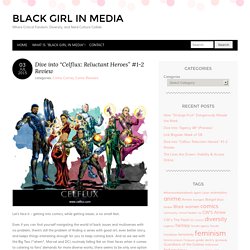 Even if you can find yourself navigating the world of back issues and multiverses with no problem, there’s still the problem of finding a series with good art, even better story, and keeps things interesting enough for you to keep coming back. And as we see with the Big Two (*ahem*, Marvel and DC) routinely falling flat on their faces when it comes to catering to fans’ demands for more diverse works, there seems to be only one option for veteran and newcoming comic fans alike: turn to indie. Marvel's hip-hop tribute embraces black metaphors but excludes black people. “Marvel Comics and hip-hop culture have been engaged in an ongoing dialogue,” Marvel editor-in-chief Alex Alonso declared. Alonso was hyping a series of forthcoming Marvel variant covers based on classic hip-hop albums.

Still, even for marketing gobbledygook, his statement strains credulity. Marvel has a history of dialogue with hip-hop? Spider-Man and Captain America were inspired to hit bad guys by NWA’s Fuck tha Police? A Race of Preternatural Beings That Eat Vampires. Website dedicated to and from the perspective of Blerds (Black Nerds). We tackle all subjects for your nerd pedigree. Writer: Kurtis J. Weibe / Artist: Tess Fowler / Image Comics Issue #12 picks up right where #11 left off: our queens are resting/getting tanked at The Prancing Pony The Until Tomorrow Inn en route to Mage University when Nazgûl a Smidgen assassin gains the upper hand on a tuckered-out Betty. Luckily a drunken Vi stumbles upstairs and kicks down the wrong door just in time to… distract… Betty’s would be killer, effectively enough to save her friend.

Let it be known that the way she saves her, how Fowler drew that page, I mean… it’s one of my favorite pages ever. I laughed out loud in real life. The Divine - a tale of dark magical realism in the war-torn jungles of Southeast Asia / Boing Boing. See sample pages of at Wink. It seems as though Lord of the Flies-like tales are all the rage in comics these days. Here on Wink we've reviewed several books that feature kids gone wild, namely The Wrenchies and Beautiful Darkness, and there are others.

Adding its own unique spin to this trope is The Divine, a graphic novel of magical realism. Inspired by actual events, The Divine follows the fated exploits of Mark, an ex US army military explosives expert who's trying to make a go at domestic bliss, but having a hard time finding a decent job to support his wife and baby on the way. He wants anything but to accept an offer made by a meat-headed former military buddy, Jason. That hell breaks loose the moment Mark steps foot on the matted jungle floors of Quanlom.

I really enjoyed the sweat-soaked journey this book took me on. We're Getting a New Black Panther Comic, and It Sounds Absolutely Incredible. Bangladesh launches first lesbian comic. Dhee falls in love with another girl but faces intense pressure to conform. Boys of Bangladesh 07 September 2015 by Darren Wee Bangladesh’s first lesbian comic has been launched to ‘address the silence and taboo around gender and sexuality’ in the Muslim-majority country. Several hundred people attended the launch at the British Council in Dhaka on Saturday (5 September), although entry was carefully scrutinized for fear of protesters. The comic was developed as an advocacy material the country’s largest LGBTI group, Boys of Bangladesh (BoB).

Heroine Dhee falls in love with another girl and, facing intense pressure to conform, asks readers whether she should commit suicide, marry a man to please her family, flee the country or stay and follow her heart. ‘The Bangla word “Dhee” means intellect, knowledge, wisdom, cognition or comprehension. Uzlolzu: It’s been a while since I made any... - People of Color in European Art History.

- Webcomics w/ Black Leads. 'Monstress': Inside The Fantasy Comic About Race, Feminism And The Monster Within. Monstress, a new comic book series from Image Comics which launches this week, is all about hidden depths. Monstress: Why Feminism is Best Served Diverse. Batman confronts police racism in latest comic book. Super pouvoir noir.

AFROSTREAM, LES MEILLEURS FILMS ET SÉRIES AFRO EN ILLIMITÉ. Watch a Wonderful South African Short Film Exploring Ance. 5 Must See Sci-Fi Films From Indigenous Filmmakers. Zootopia’s Story Was Originally Going to Be Much Darker … and a Lot a Less Interesting. Séries : The Expanse, le prochain space opera de Syfy US. Mini About Hero Lawman Bass Reeves In Works At HBO. Ursula K. Le Guin on the TV Earthsea. How The TV Show of Octavia Butler's Dawn Will Stay True to Her Incredible Vision. ‘Show Me A Hero’ reveals the polite faces of racism. 8 African and Afro-Diasporan Webseries To Get Into. Iluvubutwebseries. ABC Pilot Spark Imagines an Alternate 2016 in Which Everything Is Steampunk. Surviving Episode 2, Gotta Get Home.... New ABC show 'Cleverman' is about an Aboriginal superhero and we're already hooked off the trailer. Black Women Are Leading a Cultural Movement through TV.

And Now For Something Completely Different - Episode 3 : Sunset. How we developed a black woman protagonist who mattered. 14 of the Best Playable Black Female Characters in Video Games - Blerds. An Iranian developer's entrancing game about his culture and the mathematics of art. Une petite histoire du jeu vidéo africain. The call for diverse representation in gaming: A win in 'Mirror's Edge Catalyst' -