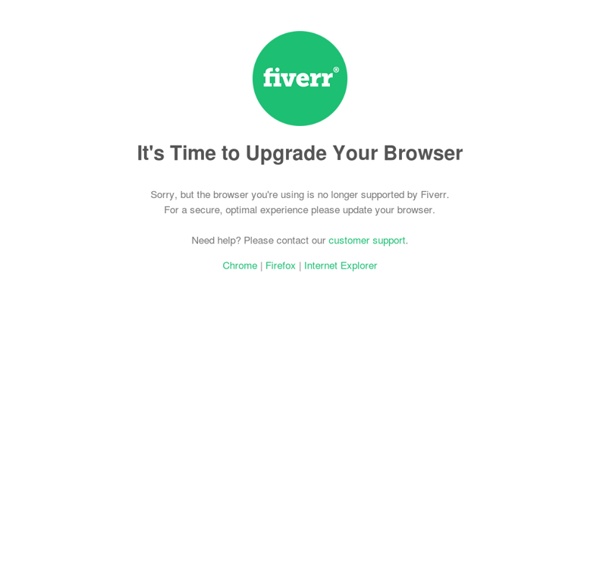 Philly: Another burka robbery Burkas are all the rage in America, particularly among the criminal. via Teens in Muslim burkas try to rob Delco gun shop. Most teenagers do dumb things. But not trying-to-rob-Joe-Galiano dumb. Who is Joe Galiano? Form Registration and Login The first step is to install the extension in your Dreamweaver. To do that, double click the downloaded .mxp file. After that, start Dreamweaver; in the menu Commands, three possible options will appear: Registration and Login: Insert Registration - This is the option you have to choose to convert a form - created previously - into a Registration Form. The only requirement is that the form must have its <form...> ...

How to Create a Million-Dollar Business This Weekend (Examples: AppSumo, Mint, Chihuahuas) Noah Kagan built two multi-million dollar online businesses before turning 28. He also looks great in orange. (Photo: Laughing Squid) I first met Noah Kagan over rain and strong espressos at Red Rock Coffee in Mountain View, CA. The Amazings Sadly, it is no more. We had an incredible 2 years running the venture, and we are really proud of what we managed to achieve as a community of elders, learners and supporters. However, we have decided to focus on delivering vocational education and, as a result, we are opening up the platform to teachers of all ages. Since The Amazings was closely linked with the idea of learning specifically from elders, we felt it wasn't appropriate to keep using the name (perhaps one day it could be resurrected?). So now you find yourself on Mastered. The new name reflects our change in emphasis towards masters and mastery.

Welcome FundersClub If we think back over the past decade, software has done a great job of making inefficient markets more accessible and efficient. eBay made it easier for buyers and sellers to find and exchange products. One of our portfolio companies, TaskRabbit, is creating a marketplace for labor that efficiently connects those who need tasks completed with those that can perform the work. Kickstarter is enabling, and making it easier for, the world's most creative people to turn their dreams into reality.

Massive Food Stamp Fraud Ring Busted in Arizona K&S convenience store workers Kameel Sweiss, Ameer Sweiss, and Faday Sweiss were arrested on Wednesday on charges of suspicion of illegally conducting an enterprise, fraudulent schemes and artifices, money laundering, unlawful use of food stamps, and computer tampering. "People were essentially selling their cards to [the] store," said spokesperson Stephanie Grisham. Arizona Attorney General Tom Horne says the bust is the fifth of its kind this year and that this is the largest to date. Horne told Fox News host Neil Cavuto that food stamp fraud is a growing problem, as 47,635,297 people now receive taxpayer-funded food stamps. "It happens quite a bit," said Horne.

HTML5 and CSS3 in Dreamweaver CS5Part 2: Styling the web page This is Part 2 of a three-part tutorial series exploring the HTML5 and CSS3 features in Dreamweaver CS5.5. Part 1 shows how to build a web page for a fictional restaurant, Citrus Cafe, using HTML5 structural elements, such as <header>, <footer>, <nav>, <section>, and <article>. In this part, you'll style the page using CSS3 properties —such as text and box shadows and rounded corners—using new tools in the Dreamweaver CS5.5 CSS Styles panel. These properties are widely supported in modern browsers, but you need to use browser-specific properties in combination with the official properties to ensure the widest possible support.In this tutorial, you'll learn how to access the browser-specific properties in the Dreamweaver CS5.5 code hints.

ClickBank Pitch Page and Thank You Page Creation by PitchMagic Selling a product or service through ClickBank? You'll need a landing page. Whether you're an Affiliate or Vendor, having a professional landing page & website that converts is key to your success. $21,243 in 8 days: Why AppSumo is Going to Keep Crushing It This post got all the way up to #3 on Hacker News, brought me about 150x my daily traffic in less than 24 hours, and completely overloaded my site. It was awesome. I decided to add it to the “Best of” section of ClickMinded, even though it doesn’t really have anything to do with SEO. Long Road Ahead to 'Six Million Dollar Man' SAN DIEGO -- Robotic, brain-controlled replacements for human hands and eyes no longer appear to be purely sci-fi fantasy, but dozens of hurdles to making them into plastic-and-metal reality still remain, researchers suggested here. Such issues as how to keep electrodes functioning in vivo for years, where to connect them to nerve fibers, how to detect the brain signals intended to control a robotic limb -- even how to keep a robotic leg from running when a patient dreams of running -- are among those that researchers on "brain-machine interfaces" are still contending with, according to presenters at a session Saturday at the annual meeting of the Society for Neuroscience. Talk of such devices brings to mind the 1970s TV program "The Six Million Dollar Man" and the 1987 film "Robocop," as well as the new series "Almost Human" that debuts this month. All feature badly mangled humans outfitted with "bionic" replacement parts that respond to the person's thoughts.