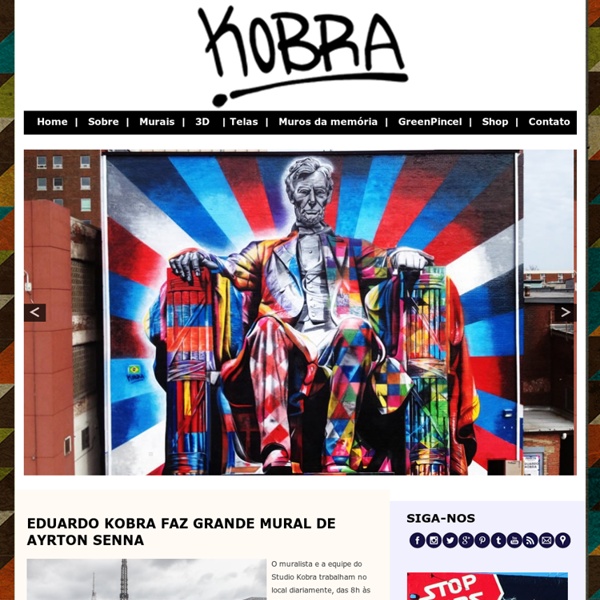 Inspiration Artists Chiho Aoshima | Artists | Kaikai Kiki Co., Ltd. Chiho Aoshima Using Bezier curves, Chiho Aoshima creates extraordinary worlds populated with ghosts, zombies, and teenage girls. Debuting in the art scene with no formal art training, Chiho Aoshima’s work transcends traditional techniques of representation. Her work is printable on any surface; from canvas bags to giant wallpaper installations. Aoshima’s work has garnered international renown with a number of high profile projects. In 2004, she was invited to participate in the 54th Carnegie International at the Carnegie Museum of Art, Pittsburgh, where she unveiled her largest wallpaper piece to date, measuring 106 feet (32.5m ) in length by 15 feet (4.8m ) in height. In a solo show in 2005, Aoshima presented both her first sculptural work and a 5-screen 7-minute animation piece.

Letting environmental art speak for itself is no longer enough Cynthia Hooper is constantly dancing. At least, this is how the Californian film-maker describes balancing the two halves of her practice. Yes, she makes works of art; but she also tries to raise awareness of environmental issues. Her films of energy infrastructure, waste landscapes and agricultural spaces are often stark and hypnotic – even strangely alien and futuristic – when presented on their own. Eschewing explanatory infographics and voice-overs, they feel much more like art pieces than documentaries. A couple of weeks ago, Hooper presented some of her work as a guest in the Infrastructure Aesthetics series at New York University’s Department of Media, Culture, and Communication. Advertisement Exportadora De Sal from Cynthia Hooper on Vimeo. The first piece she showed was Exportadora de Sal (2007), which perfectly sets the tone for her style of work. Geotérmoeléctrica Cerro Prieto from Cynthia Hooper on Vimeo. More on these topics: energy and fuels

Alexandre Farto aka Vhils Selected Works Sylvain Meyer New to me, these wonderful land art installations by Swiss artist Sylvain Meyer who modifies wooded areas and landscapes to create various impermanent patterns, sculptures, and textures. Everything seen here was constructed without the use of Photoshop, even the mossy spider. Whoa! Lars Botten Photographer - Poppy Dandiya- Poppy Dandiya Poppy Dandiya is a studio jeweler living between Jaipur and England. Poppy was born in 1955 and by 1975 he completed his formal education at St Stephens College in Delhi. This education was designed to pave his way into the Indian bureaucracy, but he started biking and backpacking across India and Europe instead. To pay for his travels he bought pieces of old silver jewellery from pawn shops during his biking trips around the Thar desert, and sold it to friends, and later boutiques. Little did he know then that he was setting up the foundations of his new career. By 1980, Poppy found himself in London, taking evening classes in jewellery-making and gemmology at Sir John Cass, honing the jewellery instincts he had inherited from his jeweler grandfather. Finally, since around 1996, Poppy started sharing his time again between Jaipur and the UK, first in Cambridge and later in Devon.

Vegan Bunnies Massive Art Nouveau-Inspired Mural in Montreal For 16 days straight, from dawn to dusk, five highly determined Montreal-based artists (who make up the artist run collective A'shop) worked on a graffiti mural of a Mother Nature-esque Madonna or a modern-day version of "Our Lady of Grace." Inspired by Czech Art Nouveau painter Alphonse Mucha, the crew created this breathtakingly beautiful five story mural using 500 cans of spray paint in over 50 different colors. “We been doing graffiti for a long time but this is our first large project involving the whole team,” Fluke of A'shop told The Montreal Gazette. “We’re always busy with other projects so we’ve never really had time to let [the reactions to] them sink in. The city gave the group complete control of the project and, luckily, the public ended up loving it. Fluke said that he hopes this project will encourage other city boroughs to consider murals of their own. Update #1: We got in touch with Kris Wilk at A'shop to ask him some more questions. A'shop website