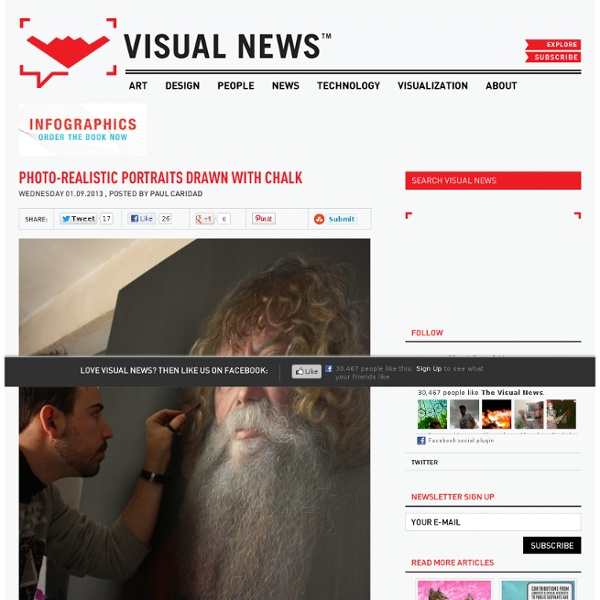 We’ve all had our eyes fooled by artists with photorealistic techniques such as Pedro Campos’ picture perfect oil paintings, Paul Cadden’s hyperrealistic pencil drawings, Samuel Silva’s ballpoint pen drawing, and Nathan Welsh’s city paintings, but never before had we seen it done with chalk…until now! Rubén Belloso Adorna of Seville, Spain creates enormous portraits that are so detailed, you would not believe they are not photographs, but they are actually drawings made with chalk pastels. You can see the true magnitude of each drawing when you see the photos of Adorna working on them, yet even when you zoom in and look closely they still look like a high definition photo. See Also WHITEBOARD DRAWINGS DONE ON A SHORT LUNCH BREAK The 26 year old artist holds a degree in Fine Arts from the University of Seville. He has received much recognition for his work throughout Spain and internationally, with exhibitions in galleries throughout Italy, Spain, and Portugal. Via: Reddit.com

Kyle Lambert - Morgan Freeman - Photorealistic Finger Painting The world's most realistic finger-painting. I recently discovered that it was possible to create incredibly high resolution (4k) paintings using only my iPad, and I wanted to see just how far I could push digital artwork and paint a true photorealistic portrait. I started with a blank white screen and began capturing Morgan Freeman’s likeness, quickly painting the broad strokes with my finger. I then reduced the brush size to a few pixels, pinched to zoom and carefully painted in the fine detail. Finger painting in the extreme Photorealistic Pictures Drawn With a BIC Pen EmailEmail At first sight they may look like some pretty sharp blue photographs, however all those pictures are actually hand drawn with a simple Bic ballpoint pen! Spanish artist Juan Francisco Casas uses up to four 14p ballpoint pens to create his incredibly photorealistic drawings, measuring up to 10ft (3 meters) high. The use of penballs makes Juan’s drawings even more original, which certainly has played a big role in his way to success, and his works are already a sell-out at exhibitions. His source of inspiration comes from his own photographs of nights out with his friends, so you can only imagine how wild his parties are, as half of his drawings include girls that forgot to put on their clothes. Website: juanfranciscocasas.com

Realistic Oil Painting by Marta Penter Article by James Pond I am the owner of Pondly.com / art lover / electrical engineer / software developer / MBA in e-business student. I blog for pleasure and love to share my Internet findings. 7 realistic pencil portraits with work-in-progress pics We’ve seen lots of spectacular pencil portraits around here, and these from Olga Larionova continue the trend. In addition to her final products, for several of her drawings, she’s posted pics of her work in process, too, which makes them all the more interesting and impressive…

19 Amazing Paintings, Not Photos One of my favorite things I like to do on this site is share the work of amazing artists. These seven artists were chosen because each has the ability to create paintings so realistic they look like pictures. These mind-blowing, hyper-realistic scenes are made by using nothing but oil-based paints on linen or canvas. Though some critics may discount their artistic ability, saying that creating paintings from photos isn't "true art," I happen to disagree. Stunning Pencil Portraits by Olga Larionova Russian artist Olga Melamory Larionova’s drawings rank high with some of the most realistic I’ve ever seen. Her art is so detailed and sharp that you’ll have a hard time believing that these are not actually photographs. Take a peek at some more of her amazing drawings below. Via Pondly.com

Dran Based in Toulouse, Dran is a multi-talented artist who uses a variety of media such as installations, paintings and drawings to convey his ironic viewpoint. After developing his skills as part of Toulouse’s renowned graffiti scene. He is also a fan of the absurd and has published a number of books featuring his funny sketches parodying everyday events with great doses of surrealism. Check him at retroactif.free.fr/dran

Danielle Richard - Romantic Realism Danielle Richard is an amazing artist born and educated in Quebec City, Canada. In her art you will find oil paintings, acrylic and pastel works. Her paintings are often linked to romantic realism, contemporary impressionism and new figuration. They are mostly distinguished by a unique treatment of the light. These paintings look like real photographs, but the artist still tries not to step into hyperrealism. Unbelivable Zaria Forman Artworks The inspiration for Zaria’s drawings began in early childhood when she traveled with her family throughout several of the world’s most remote landscapes, which were the subject of her mother’s fine art photography. Her work exhibits extensively in galleries and venues throughout the United States and overseas. In addition to exhibitions, recent projects include a series of drawings that served as the set design for the classic ballet Giselle, which premiered in October 2012 at the Grand Theatre of Geneva, Switzerland. Ten of her drawings were also used in the set design for House of Cards, a Netflix TV series directed by David Fincher and starring Kevin Spacey. In August 2012 she led Chasing the Light, an expedition sailing up the NW coast of Greenland, retracing the 1869 journey of American painter William Bradford and documenting the rapidly changing arctic landscape.