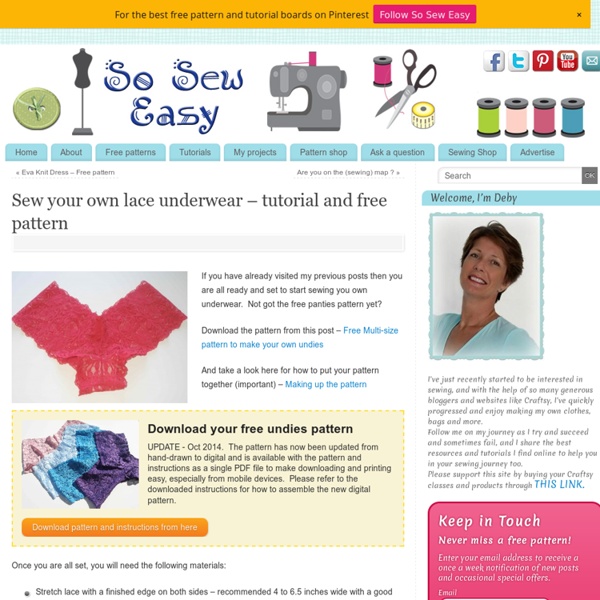 If you have already visited my previous posts then you are all ready and set to start sewing you own underwear. Not got the free panties pattern yet? Download the pattern from this post – Free Multi-size pattern to make your own undies And take a look here for how to put your pattern together (important) – Making up the pattern Download your free undies pattern UPDATE - Oct 2014. Once you are all set, you will need the following materials: Stretch lace with a finished edge on both sides – recommended 4 to 6.5 inches wide with a good amount of stretch (recommended suppliers Deb’s Lace and Trims and Sew Sassy)Matching regular threadPiece of cotton jersey – new or recycledSewing machineRecommended – Overcasting foot An overcasting foot is recommended for sewing with stretch lace to get a really nice narrow finished seam and edge inside. Let’s get started… 1. 2. 3. 4. 5. 6. 7. 8. 9. I got all over excited and made several pairs. Enjoyed this tutorial and found it useful ?

Interestingly Strange Inventions of the Past [22 Pics Interestingly Strange Inventions of the Past [22 Pics] Aug 21 2012 From Italian 150km/h single wheel motorcycles to photo-taking revolvers, this is some genuine 'WTF' content for sure. Enjoy! A baby stroller in case of a gas attack. An all terrain vehicle (that remains level at all times). Amphibious bicycle that is able to be ridden on land as well as water. A single-wheel motorcycle with a maximum speed of 150 km/h. A hat that is also a radio. Life jackets created out of bicycle tubes. An extending RV. A piano for bedridden people. Glasses that enable you to read while lying down. A cover with a ‘safety’ net to reduce the number of casualties on the roads. Analog GPS navigation that utilizes a scrolling map. An expanding bridge, capable of holding massive amounts of weight. A shield to protect the face during snow storms and blizzards. An early contraption that could be compared to a modern day hair dryer. A revolver that captures an image right before the trigger is pressed. Jul 18 2011

5 Real-Life Stories of Twins Creepier Than Any Horror Movie Twins get a bad reputation from movies: They are shown as either satanic beings or parent-trapping little brats. Well, this reputation may not be completely unfounded. If you feel bad for being so creeped out by twins, let us share with you some true stories that range from merely weird to downright bone-chilling. #5. Photos.com Swedish twins Ursula and Sabina Eriksson had no history of mental illness and lived normal, happy lives with their respective families. Sabina and Ursula were in Ireland when, for unknown reasons, they hopped on a bus to London without telling anyone. At this point they ran into a group of officers who were being filmed for a COPS-like show for the BBC. As seen in the video, the twins were detained by the cops and appeared calm, until Ursula sprinted onto the highway and ran directly into the wheels of a truck. Sorry, a lorry. The cops hadn't even had time to react when, seconds later, Sabina did the same thing and was struck by a car. That wasn't the end of it.

Abandoned Suitcases Reveal Private Lives of Insane Asylum Patients If you were committed to a psychiatric institution, unsure if you’d ever return to the life you knew before, what would you take with you? That sobering question hovers like an apparition over each of the Willard Asylum suitcases. From the 1910s through the 1960s, many patients at the Willard Asylum for the Chronic Insane left suitcases behind when they passed away, with nobody to claim them. Upon the center’s closure in 1995, employees found hundreds of these time capsules stored in a locked attic. Working with the New York State Museum, former Willard staffers were able to preserve the hidden cache of luggage as part of the museum’s permanent collection. “There were many patients in these asylums who were probably not unlike friends you and I have now.” Photographer Jon Crispin has long been drawn to the ghostly remains of abandoned psychiatric institutions. Crispin’s photographs restore a bit of dignity to the individuals who spent their lives within Willard’s walls. Freda’s suitcase.