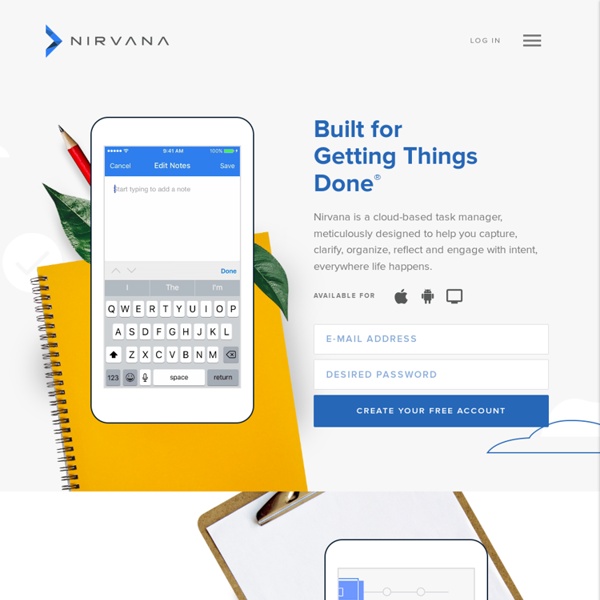 42Tasks Tasks Made Easy Sign up for free and manage your everyday business and personal tasks from anywhere. 42tasks revolutionizes the way tasks are managed. Manage and Share Projects A real collaboration with new "Projects" feature. Create, manage and share your projects and tasks. Collaborate in a group and share your tasks to others. 10+ Tips and Tools To Keep Teachers Organized “Be regular and orderly in your life, so that you may be violent and original in your work.” ~ Gustave Flaubert Learning online can be an incredible journey but at some point you may feel overwhelmed with the surplus of information and resources. You may feel very excited about a resource you come across, but want to access that resource at some other date. TED (conference) TED (Technology, Entertainment, Design) is a global set of conferences owned by the private non-profit Sapling Foundation, under the slogan "ideas worth spreading". TED was founded in 1984 as a one-off event.[1] The annual conference began in 1990, in Monterey, California.[4] TED's early emphasis was technology and design, consistent with its origins in the Silicon Valley. Since June 2006,[1] the talks have been offered for free viewing online, under Attribution-NonCommercial-NoDerivs Creative Commons license, through TED.com.[8] As of April 2014, over 1,700 talks are available free online.[9] By January 2009 they had been viewed 50 million times. In June 2011, the viewing figure stood at more than 500 million,[10] and on Tuesday, November 13, 2012, TED Talks had been watched one billion times worldwide.[11] TED's mission statement begins: We believe passionately in the power of ideas to change attitudes, lives and ultimately, the world.

18 Tricks to Make New Habits Stick Wouldn’t it be nice to have everything run on autopilot? Chores, exercise, eating healthy and getting your work done just happening automatically. Unless they manage to invent robot servants, all your work isn’t going to disappear overnight. But if you program behaviors as new habits you can take out the struggle. With a small amount of initial discipline, you can create a new habit that requires little effort to maintain. Facebook This article is about the social networking service. For the type of directory, see face book. Facebook (formerly [thefacebook]) is an online social networking service headquartered in Menlo Park, California. Facebook was founded on February 4, 2004, by Mark Zuckerberg with his college roommates and fellow Harvard University students Eduardo Saverin, Andrew McCollum, Dustin Moskovitz and Chris Hughes.[7] The founders had initially limited the website's membership to Harvard students, but later expanded it to colleges in the Boston area, the Ivy League, and Stanford University.

How To Create A Habit In 15 Days Most of our life is lived by habits. We learn how to ride a bike, how to drive a car, we even learn how to speak and read. And then we do all of these with minimum effort and implication. Basically, all of these are habits. LinkedIn LinkedIn /ˌlɪŋkt.ˈɪn/ is a business-oriented social networking service. Founded in December 2002 and launched on May 5, 2003,[3] it is mainly used for professional networking. In 2006, LinkedIn increased to 20 million viewers.[7] As of June 2013[update], LinkedIn reports more than 259 million acquired users in more than 200 countries and territories.[2][8] What It Takes to Form a Good Habit I think "accountability buddy" really misses the point. There is satisfaction and joy in accomplishing the task, but that's where accountability buddy is a misnomer. All habits of any sort will trip, falter, fail, etc. It's all about getting back in the game.

Twitter History Creation and initial reaction Twitter's origins lie in a "daylong brainstorming session" held by board members of the podcasting company Odeo. Dorsey, then an undergraduate student at New York University, introduced the idea of an individual using an SMS service to communicate with a small group.[15][16] The original project code name for the service was twttr, an idea that Williams later ascribed to Noah Glass,[17] inspired by Flickr and the five-character length of American SMS short codes. The developers initially considered "10958" as a short code, but later changed it to "40404" for "ease of use and memorability

7 Tools for Creating Mind Maps and Outlines Online One of the presentations that I made this week was about having students create videos to demonstrate their knowledge of a topic. In that presentation one of the points that I stress is the need for students to create outlines of their videos before moving onto the technical aspects of constructing a video. Here are some tools for creating outlines and mind maps to plan video projects, podcasts, or essays. Quicklyst is a nice tool for taking notes and creating outlines.

YouTube YouTube is a video-sharing website, created by three former PayPal employees in February 2005 and owned by Google since late 2006, on which users can upload, view and share videos.[4] The company is based in San Bruno, California, and uses Adobe Flash Video and HTML5 technology to display a wide variety of user-generated and corporate media video content, including video clips, TV clips, and music videos, and amateur content such as video blogging, short original videos, and educational videos. Most of the content on YouTube has been uploaded by individuals, but media corporations including CBS, the BBC, Vevo, Hulu, and other organizations offer some of their material via YouTube, as part of the YouTube partnership program.[5] Unregistered users can watch videos, and registered users can upload an unlimited number of videos. Videos considered to contain potentially offensive content are available only to registered users affirming themselves to be at least 18 years old.

Prezi Prezi is a cloud-based (SaaS) presentation software and storytelling tool for presenting ideas on a virtual canvas.[1][2][3][4][5] The product employs a zooming user interface (ZUI), which allows users to zoom in and out of their presentation media, and allows users to display and navigate through information within a 2.5D or parallax 3D space on the Z-axis. Prezi was officially established in 2009 by co-founders Adam Somlai-Fischer, Peter Halacsy and Peter Arvai. History[edit] Prezi (or Prezi.com) was created by the support of Kitchen Budapest and Magyar Telekom in 2008 in order to replace the ordinary slide based presentations.