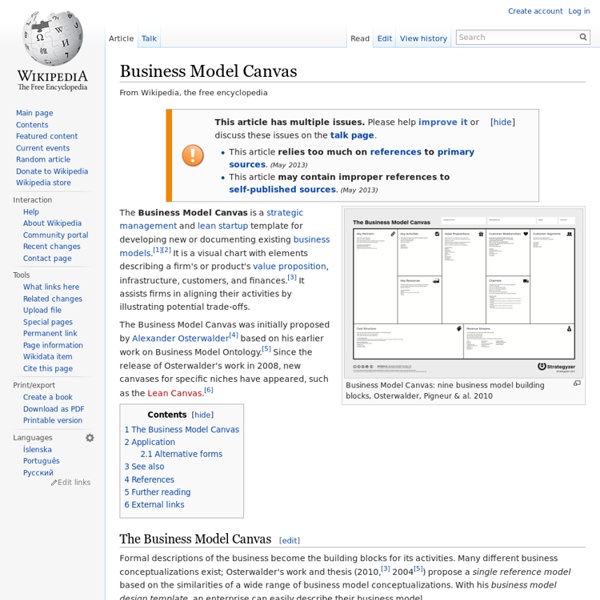 Business Model Canvas: nine business model building blocks, Osterwalder, Pigneur & al. 2010 The Business Model Canvas is a strategic management and lean startup template for developing new or documenting existing business models.[1][2] It is a visual chart with elements describing a firm's or product's value proposition, infrastructure, customers, and finances.[3] It assists firms in aligning their activities by illustrating potential trade-offs. The Business Model Canvas was initially proposed by Alexander Osterwalder[4] based on his earlier work on Business Model Ontology.[5] Since the release of Osterwalder's work in 2008, new canvases for specific niches have appeared, such as the Lean Canvas.[6] The Business Model Canvas[edit] Formal descriptions of the business become the building blocks for its activities. InfrastructureKey Activities: The most important activities in executing a company's value proposition. Application[edit] Alternative forms[edit] See also[edit] References[edit] Related:  Strategic Thinking • IndieMe • Management - Διοίκηση

Core Competence Analysis - Problem Solving Techniques from MindTools Building Sustainable Competitive Advantage What makes you stand out from the crowd? © iStockphoto/abzee The idea of "core competences" is one of the most important business ideas currently shaping our world. This is one of the key ideas that lies behind the current wave of outsourcing, as businesses concentrate their efforts on things they do well and outsource as much as they can of everything else. In this article we explain the idea and help you use it, on both corporate and personal levels. By using the idea, you'll make the very most of the opportunities open to you: You'll focus your efforts so that you develop a unique level of expertise in areas that really matter to your customers. Explaining Core Competences: The Value of Uniqueness The starting point for understanding core competences is understanding that businesses need to have something that customers uniquely value if they're to make good profits. Using This in Your Business and Career Tip 1: Tip 2: Tip 3: Tip 4:

see Faisal Khan's answer Leadership Theories[edit] Early western history[edit] The trait theory was explored at length in a number of works in the 19th century. Most notable are the writings of Thomas Carlyle and Francis Galton, whose works have prompted decades of research.[4] In Heroes and Hero Worship (1841), Carlyle identified the talents, skills, and physical characteristics of men who rose to power. Rise of alternative theories[edit] In the late 1940s and early 1950s, however, a series of qualitative reviews of these studies (e.g., Bird, 1940;[5] Stogdill, 1948;[6] Mann, 1959[7]) prompted researchers to take a drastically different view of the driving forces behind leadership. Reemergence of trait theory[edit] New methods and measurements were developed after these influential reviews that would ultimately reestablish the trait theory as a viable approach to the study of leadership. Specifically, Zaccaro (2007)[16] noted that trait theories still: Attribute pattern approach[edit] Behavioral and style theories[edit] B.F.

Strategic Thinking Exercises - 13 Point Strategic Change Management Checklist As we mentioned recently, we’re on the lookout everywhere for strategic thinking exercises to share. We spotted a recent “Inside the Executive Suite” feature from the Armada Executive Intelligence Briefing featuring a thirteen-question checklist for strategic change management. The origin for the strategic change management list was two stories in the Wall Street Journal. While issues (some major) exist for both Wal-Mart and Apple, the Inside the Executive Suite piece offered the strategic change management checklist as an example of introducing more aggressive innovation and change management when a company doesn’t exactly seem to need radical change. A 13-Point Checklist for Strategic Change Management If you’re contemplating (or even in the midst of) making dramatic changes within your own organization, this list is helpful as a strategic thinking exercise to make sure you’re considering the breadth and depth of changes two pretty successful companies are undertaking.

How to Get Your First “Real Job” Out of College (Even if You’re Currently a Bartender with a Philosophy Degree) – A Case Study By Matt Goldenberg Case Study – “Do what you love and the money will follow.” That’s the lie you were told that led to your liberal arts major — and eventually that dead end job at a coffee shop, restaurant, or bar. It’s not that you’re not smart, capable, or motivated. That’s the predicament that Justin Marshall was in when we first started working together. One year later, Justin is the operations manager for a high-end restaurant group in DC, the social media manager for a hot web series, and makes extra money on the side as a social media consultant. It turns out career miracles are possible. How to Work Career Miracles – The Skill Bridge Technique The turning point for Justin was when he realized that you can change the course of your career with one job title. You can change the course of your career with one job title. The Skill Bridge Technique: Let’s unpack this and look at exactly what Justin did at each step in the process. Finding Jobs in High Demand Finding Jobs You’re Good At Money

Leadership lessons from the Royal Navy - McKinsey Quarterly - Organization - Strategic Organization Britain’s Royal Navy is a disciplined command-and-control organization that moves across 140 million square miles of the world’s oceans. Although few environments are tougher than a ship or submarine, I’ve been struck, while conducting research on the Royal Navy, by the extent to which these engines of war run on “soft” leadership skills. For officers leading small teams in constrained quarters, there’s no substitute for cheerfulness and effective storytelling. In fact, I’d go so far as to say that naval training is predicated on the notion that when two groups with equal resources attempt the same thing, the successful group will be the one whose leaders better understand how to use the softer skills to maintain effort and motivate. I believe that the same principle holds true for business. Among the many softer leadership skills important to the Royal Navy, I highlight here the aforementioned cheerfulness and storytelling, which to me were both unexpected and broadly applicable.

6 Habits of True Strategic Thinkers In the beginning, there was just you and your partners. You did every job. You coded, you met with investors, you emptied the trash and phoned in the midnight pizza. Whatever that means. If you find yourself resisting "being strategic," because it sounds like a fast track to irrelevance, or vaguely like an excuse to slack off, you're not alone. This is a tough job, make no mistake. After two decades of advising organizations large and small, my colleagues and I have formed a clear idea of what's required of you in this role. Anticipate Most of the focus at most companies is on what’s directly ahead. Look for game-changing information at the periphery of your industrySearch beyond the current boundaries of your businessBuild wide external networks to help you scan the horizon better Think Critically “Conventional wisdom” opens you to fewer raised eyebrows and second guessing. Interpret Ambiguity is unsettling. Decide Many leaders fall prey to “analysis paralysis.” Align Learn

What High-Quality Revenue Looks Like - Anthony Tjan Growth. In my world of venture capital, we hear all the time that growth drives value. It is how some investors justify putting sky-high valuations on companies that are growing, but not yet making any money. Consider Zynga, which lost $209 million in 2012 — but is still valued at about $2 billion because of the cash it raised and because its revenue is still growing. On the other hand, there’s Groupon, once lauded as the “fastest-growing company ever.” Its stock price peaked weeks after the company went public in 2011 and is down about 80% since. Focus on growth and growth alone is always a temporary strategy. Put another way, quality (i.e. sustainability) of revenue matters as much as quantity (i.e. growth) of revenue. 1. 2. 3. So there you have it.