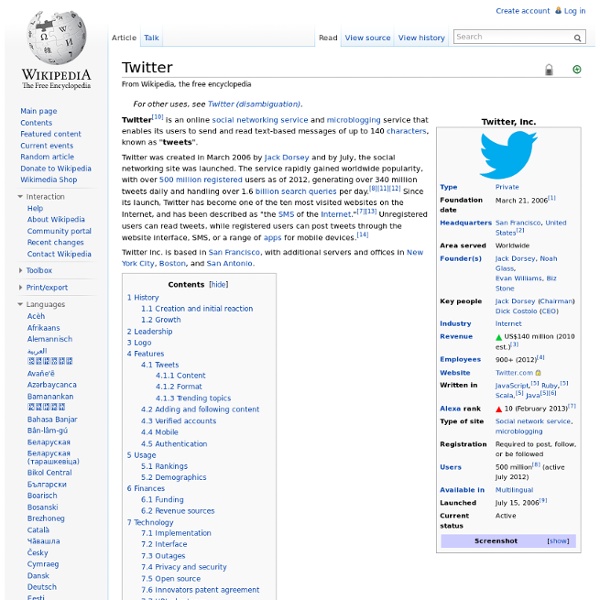 History Creation and initial reaction Twitter's origins lie in a "daylong brainstorming session" held by board members of the podcasting company Odeo. Dorsey, then an undergraduate student at New York University, introduced the idea of an individual using an SMS service to communicate with a small group.[15][16] The original project code name for the service was twttr, an idea that Williams later ascribed to Noah Glass,[17] inspired by Flickr and the five-character length of American SMS short codes. ...we came across the word 'twitter', and it was just perfect. The first Twitter prototype, developed by Dorsey and contractor Florian Weber, was used as an internal service for Odeo employees[20] and the full version was introduced publicly on July 15, 2006.[8] With Twitter, it wasn't clear what it was. Reaction at the conference was highly positive. The first unassisted off-Earth Twitter message was posted from the International Space Station by NASA astronaut T. Growth Leadership Logo Tweets Related:  The Digital Cult

Instagram History Instagram began development in San Francisco when Kevin Systrom and Brazilian Michel "Mike" Krieger chose to focus their multi-featured HTML5 check-in project Burbn on mobile photography.[19][20] The name "Instagram" is a portmanteau of "instant camera" and "telegram".[21] On March 5, 2010, Systrom closed a $500,000 seed funding round from Baseline Ventures and Andreessen Horowitz while working on Burbn.[22] Josh Riedel joined the company as Community Manager.[23] Shayne Sweeney joined in November 2010 as an engineer and Jessica Zollman was hired as a Community Evangelist in August 2011.[24][25] On February 2, 2011, it was announced that Instagram had raised $7 million in Series A funding from a variety of investors, including Benchmark Capital, Jack Dorsey, Chris Sacca (through Capital fund), and Adam D'Angelo.[29] The deal valued Instagram at around $25 million.[30] On October 3, 2013, Instagram announced that it would be adding advertising to its platform.[64] Popularity Users

Live Twitter XSS It's one of these days where I just had one of these "Oh no..." moments when I logged into my Twitter account and suddenly a message box with my cookie popped up. Apparently, there is an actively exploited XSS vulnerability on Twitter. From my first preliminary analysis, you'll have to hover over a link to activate it and so far I have just seen some proof of concepts from people I follow. Update (14:05 CEST): This vulnerability is confirmed to be exploitable with no user interaction automatically. Update 2 (14:13 CEST): It is possible to load secondary JavaScript from an external URL with no user interaction, which makes this definitely wormable and dangerous. Update 3 (14:24 CEST): Worm code for this vulnerability has been posted on IRC, making the rounds. Update 4 (14:36 CEST): Worm is live already... Update 5 (14:59 CEST): It appears Twitter now properly escapes links, that specific vulnerability seems closed.

Twitter Search MSN MSN (stylized in all lowercase) is a web portal and related collection of Internet services and apps for Windows and mobile devices, provided by Microsoft and launched on August 24, 1995, the same release date as Windows 95.[3] The Microsoft Network was initially a subscription-based dial-up online service that later became an Internet service provider named MSN Dial-up. At the same time, the company launched a new web portal named Microsoft Internet Start and set it as the first default home page of Internet Explorer, its web browser. The current website and suite of apps offered by MSN was first introduced by Microsoft in 2014 as part of a complete redesign and relaunch.[5] MSN is based in the United States and offers international versions of its portal for dozens of countries around the world.[6] Website[edit] Microsoft Internet Start[edit] MSN.com on its initial launch day, August 24, 1995. MSN.com in October 1996, with the logo used from 1995 to 1998. MSN.com[edit] Newest redesign[edit]

HOW TO: Retweet on Twitter Retweeting is an integral part of the Twitter experience. The retweet (or "RT") allows Twitter users to share the best links, tweets, and gems they find from others using the service. But for beginners, it's not immediately obvious what retweets are, or what tools to use to make retweeting easier. This HOW TO article not only covers the basics of retweeting, but also highlights some of the best web and mobile-based tools for retweeting and tracking RTs in real-time. 1. Retweeting is how Twitter users share interesting tweets from the people they are following. - The Twitter user @benparr tweets: I just heard that Apple is releasing new iPods in July! 2. Once you've gotten used to retweeting and seen some excellent retweets in your Twitter stream, you may want to track retweets on a larger scale. Here are some of the best web-based tools for tracking retweets: Retweetradar: Retweetradar [@retweetradar] is a web tool for tracking the most retweeted and trending content on Twitter. 3. 4. 5.

Hashtags Hashtags Introduction Hashtags are a community-driven convention for adding additional context and metadata to your tweets. They're like tags on Flickr, only added inline to your post. You create a hashtag simply by prefixing a word with a hash symbol: #hashtag. Hashtags were developed as a means to create "groupings" on Twitter, without having to change the basic service. hashtags.org provides real-time tracking of Twitter hashtags. How To Use Hashtags Start using hashtags in your tweets, preceding key words. Finally, track other tweets on the subjects you're interested in (ie: those containing the appropriate hashtags) by browsing/searching at Hashtags.org, TwitterGroups, TweetChat, TweetGrid, Twitterfall, etc. Use of hashtags Hashtags were popularized during the San Diego forest fires in 2007 when Nate Ritter used the hashtag "#sandiegofire" to identify his updates related to the disaster. Suggestions and tips CamelCase Example uses Further reading (In rough chronological order) Known issues

Facebook launches On February 4, 2004, a Harvard sophomore named Mark Zuckerberg launches The Facebook, a social media website he had built in order to connect Harvard students with one another. By the next day, over a thousand people had registered, and that was only the beginning. Now known simply as Facebook, the site quickly ballooned into one of the most significant social media companies in history. Today, Facebook is one of the most valuable companies in the world, with over 2 billion monthly active users. The origins of Facebook have been highly scrutinized (including in the critically acclaimed 2010 film The Social Network), but the exact source of the idea remains unclear. Over the course of his sophomore year, Zuckerberg built what would become Facebook. From there, Facebook spread across the world, becoming not only an incredibly valuable company but also one of the most important institutions of the early 21st Century.

Tumblr Tumblr (stylized in its logo as tumblr.) is a microblogging platform and social networking website founded by David Karp and owned by Yahoo! Inc. The service allows users to post multimedia and other content to a short-form blog. As of April 14, 2014, Tumblr hosts over 180.7 million blogs.[2] The company's headquarters is in New York City. Yahoo! History Development of Tumblr began in 2006 during a two-week gap between contracts at David Karp's software consulting company, Davidville (housed at Karp's former internship with producer/incubator Fred Seibert's Frederator Studios which was located a block from Tumblr's current headquarters).[11][12] Karp had been interested in tumblelogs (short-form blogs) for some time and was waiting for one of the established blogging platforms to introduce their own tumblelogging platform. In early June 2012, Tumblr featured its first major brand advertising campaign in conjunction with Adidas. On May 20, 2013, it was announced that Yahoo! Features Mobile

New Twitter Gets New Search - ReadWriteCloud Parsing Twitter Usernames, Hashtags and URLs with JavaScript Updated 10/05/2011 As part of an AIR project that I have been working on with my good friend Rob, we came across the need to parse a number of URLs within the text of a Twitter post. This may not sound too easy at first, but thanks to the prototype property available on JavaScript objects, our task was a relatively simple one. The prototype object of JavaScript is a pre-built object that simplifies the process of adding custom properties or methods to all instances of an object. You simply need to specify String.prototype before your method definition. e.g String.prototype.trim = function() { return this.replace(/^\s+|\s+$/g,"");} With this in mind, we can add methods to our String class, at runtime, that will allow us to manipulate the text string that is passed back in a Twitter JSON packet. The Goal To auto-magically parse different types of links within a text string. Demo The demonstration simply takes a test string and outputs it to the screen using JavaScript. See the demo in action.