30 Habits that Will Change your Life 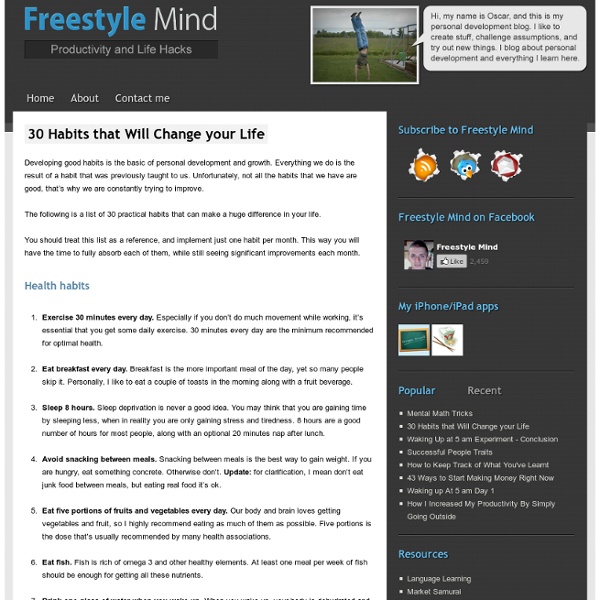 Developing good habits is the basic of personal development and growth. Everything we do is the result of a habit that was previously taught to us. Unfortunately, not all the habits that we have are good, that’s why we are constantly trying to improve. The following is a list of 30 practical habits that can make a huge difference in your life. You should treat this list as a reference, and implement just one habit per month. This way you will have the time to fully absorb each of them, while still seeing significant improvements each month. Health habits Exercise 30 minutes every day. Productivity habits Use an inbox system. Personal Development habits Read 1 book per week. Career habits Start a blog. What do you think? Update: A reader put together a downloadable copy of all these habits.

The Secret To A Lasting Relationship When a relationship becomes a one-way way street, it ends up at a dead end sooner or later. Learn to keep the traffic flowing both ways with conversation, forgiveness and mindful awareness to keep your relationship growing well into the future. It all starts with that inner conversation you have with yourself. Be aware of it, and find how easy it is to nurture your relationship in the direction you want it to go.

Theta Music Trainer A scale is a set of notes grouped together in a specific pattern. The most commonly used scale in popular music is the major scale. The notes of the major scale are numbered from 1 to 8, with the tonic assigned the number 1 and other tones moving up in sequence to the octave, which is number 8. Major Scales In the major scale, notes are arranged in a specific sequence of half steps and whole steps. A half step is the distance from one note to the next closest note. Do You Make These 10 Common Mistakes When You Think? Image: *Zara (license). ”The world we have created is a product of our thinking; it cannot be changed without changing our thinking.”Albert Einstein “It is neither good nor bad, but thinking makes it so.”William Shakespeare “Think for yourselves and let others enjoy the privilege to do so, too.”Voltaire Your thoughts are incredibly powerful.

How To Steal Like An Artist (And 9 Other Things Nobody Told Me) - Austin Kleon Wednesday, March 30th, 2011 Buy the book: Amazon | B&N | More… Here’s what a few folks have said about it: 8 Simple Affirmations You Should Whisper to Yourself Daily. 1.) “I am worthy.” Worthy of love.

How to find true friends (and love) in 45 minutes David Rowan Editor of Wired magazine This article was featured in Times Magazine, 5 November. There's a shorter version in the Ideas Bank section on the current Wired magazine. Decision Maker How to use The grid lets you enter options (things you'll choose between) in columns. Just click the "add option" button, and enter the name of each option. Then you need to enter criteria that you want to rate your options on, like price, quality, frequency etc.

The Four Noble Truths "I teach about suffering and the way to end it" Shakyamuni Buddha The teachings on the four noble truths are among the very first of many teachings that Shakyamuni Buddha gave in Sarnath (near Benares or Varanasi in North-East India), seven weeks after attaining enlightenment in Bodhgaya. These teachings are known to contain the essence of the Buddhist path, regardless of the tradition one follows. According to the Buddha, whatever life we lead, it has the nature of some aspect of suffering.