How I Became an Early Riser 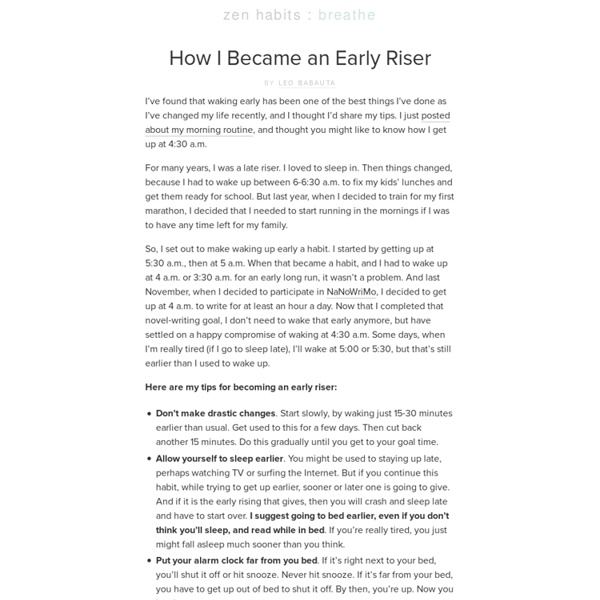 By Leo Babauta I’ve found that waking early has been one of the best things I’ve done as I’ve changed my life recently, and I thought I’d share my tips. I just posted about my morning routine, and thought you might like to know how I get up at 4:30 a.m. For many years, I was a late riser. I loved to sleep in. Then things changed, because I had to wake up between 6-6:30 a.m. to fix my kids’ lunches and get them ready for school. So, I set out to make waking up early a habit. Here are my tips for becoming an early riser: Don’t make drastic changes.

Related:  How to increase Productivity & Stuff

100 time, energy, and attention hacks to become more productive When I graduated University with a business degree last May, I received two incredible full-time job offers, both of which I declined because I had a plan. For exactly one year, from May 1, 2013, through May 1, 2014, I would devour everything I could get my hands on about productivity, and write every day about the lessons I learned on A Year of Productivity. Over the last 12 months I have conducted countless productivity experiments on myself, interviewed some of the most productive people in the world, and read a ton of books and academic literature on productivity, all to explore how I could become as productive as possible, and then write about the lessons I learned. One year, 197 articles, and over one million hits later, I’ve reached the end of my year-long journey, but not before going out with a bang.

How to start your day at 5:00 AM I have been an early-riser for over a year now. Monday through Friday I wake up at 5:00 AM without hitting the snooze button even once. I never take naps and rarely feel tired throughout the day. How to learn more and study less Photo by fatal Cleopatra Editor’s note: This is a guest post written by Scott Young. Every Monday is Productivity & Organization Day at Zen Habits.The title of this post sounds impossible right? My current GPA is a 4.2, which rests midway between an A and an A+. Despite this, I didn’t actually spend much time studying. Why I Am a Male Feminist When I was a little boy, my mother and father used to argue a lot. Some mornings, I would wake up to the alarming sound of my parents arguing loudly. The disagreement would continue until my father would yell with finality, "That is it! I'm not talking about this anymore!" The dispute would end right there. My mother never got the last word.

Feeling Stuck? 100 Ways to Change Your Life Wise Bread Picks You've got 20 minutes to change your life in 100 ways. Go. This is the premise of an exercise I tried once, when I was feeling stuck in life. Purpose Your Day: Most Important Task (MIT) By Leo Babauta I’ve mentioned this briefly in my morning routine, but I thought I’d explain a little bit more about MITs – Most Important Tasks. It’s not an original concept, but one that I use on a daily basis and that has helped me out tremendously. It’s very simple: your MIT is the task you most want or need to get done today. In my case, I’ve tweaked it a bit so that I have three MITs — the three things I must accomplish today. Do I get a lot more done than three things?

7 stupid thinking errors you probably make The brain isn’t a flawless piece of machinery. Although it is powerful and comes in an easy to carry container, it has it’s weaknesses. A field in psychology which studies these errors, known as biases. Although you can’t upgrade your mental hardware, noticing these biases can clue you into possible mistakes.How Bias Hurts You If you were in a canoe, you’d probably want to know about any holes in the boat before you start paddling. Biases can be holes in your reasoning abilities and they can impair your decision making.

10 Myths About Introverts 10 Myths About Introverts By Carl King [ Translations: Spanish | German | Dutch | Italian ] I wrote this list in late-2008. Around that time, I was lucky enough to discover a book called, The Introvert Advantage: How to Thrive in an Extrovert World 50 Things Men Wish Women Knew I just came across this article and thought it would be great for all of us ladies on here. I know my single friends and I always question what guys really want and this gives us a little more insight into that. Not to mention it's some great advice from men about what they wish we ladies knew/understood about them. Hope you enjoy!!