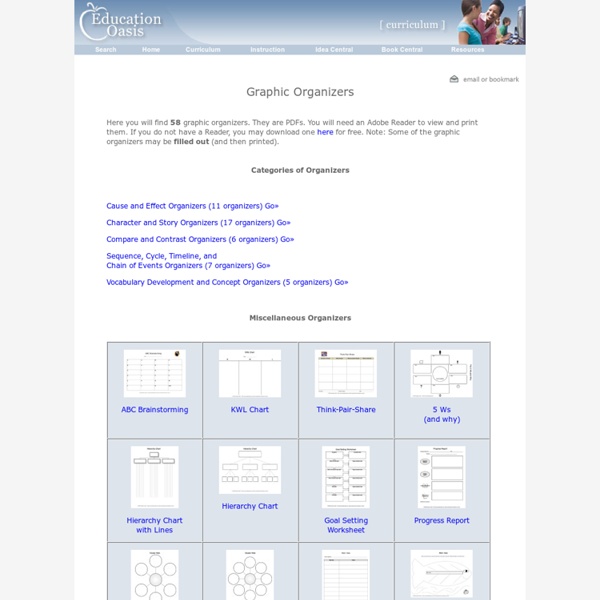 Graphic Organizers Printables and Ideas - Print them - Venn Diagrams, Concept Maps, Writing, Character, Reading Graphic Organizers Venn Diagrams Compare and Contrast Cause and Effect Imperial Japan, the Bomb & the Pacific Powder Keg Obama’s high-profile trip to Hiroshima was accompanied by a media storm that gave endless justifications for the US use of the atomic bomb on Japanese civilians. The myths are widely accepted in society, and underpin the notion of American exceptionalism. In this episode of The Empire Files, Abby Martin interviews Dr. Peter Kuznick, co-author with Director Oliver Stone of the bestselling book and HBO series “The Untold History of the United States,” about the real story behind the use of the atomic bombs—as well as the untold history of Imperial Japan, its role today for the U.S.

6 Games That Put Insane Detail Into Stuff You Didn't Notice Now that we're in a golden age of video game technology, players are constantly demanding that video games be made as graphically detailed and realistic as possible. However, programmers have been going to insane lengths to show off their attention to detail in other, less obvious ways for years now, and you probably didn't even notice. These are the amazing little flourishes that simultaneously wow us with their obsessive compulsion and provide a powerful rejoinder to the argument that soaring game budgets are both necessary and entirely justified. #6.

Seven Strategies to Teach Students Text Comprehension 1. Monitoring comprehension Students who are good at monitoring their comprehension know when they understand what they read and when they do not. Beyond the Printed Page: Museum Digital Publishing Bliki Mid February, Inkling Habitat was announced and I jumped in and produced a promotional title and am now producing a monograph and a multiple artist collection. Here’s a sketch of my experiences, along with a bit of a critique. This is intended as an overview. I am willing to share more in comments or in another post.

China to send nuclear-armed submarines into Pacific amid tensions with US The Chinese military is poised to send submarines armed with nuclear missiles into the Pacific Ocean for the first time, arguing that new US weapons systems have so undermined Beijing’s existing deterrent force that it has been left with no alternative. Chinese military officials are not commenting on the timing of a maiden patrol, but insist the move is inevitable. They point to plans unveiled in March to station the US Thaad anti-ballistic system in South Korea, and the development of hypersonic glide missiles potentially capable of hitting China less than an hour after launch, as huge threats to the effectiveness of its land-based deterrent force. A recent Pentagon report to Congress predicted that “China will probably conduct its first nuclear deterrence patrol sometime in 2016”, though top US officers have made such predictions before. Deploying nuclear-armed submarines would have far-reaching implications. Missile defence is not their only worry.

JPEGsnoop - JPEG Decoding Utility Overview Latest Version: 1.6.1 Introduction Every digital photo contains a wealth of hidden information -- JPEGsnoop was written to expose these details to those who are curious. Adolescent Literacy 101 Click the "References" link above to hide these references. ACT (2006). Reading between the lines: What the ACT reveals about college readiness in reading. Ames, IA: Author.

One way to organize thoughts is through the use of graphic organizers. This is a fairly large collection of PDF downloadable organizers. It is easier to look at a library of organizers than sifting through the web and trying to locate one that is usable. Having more than 50 readily accessible makes finding just the right organizer for the task much easier. by chedwards Oct 12