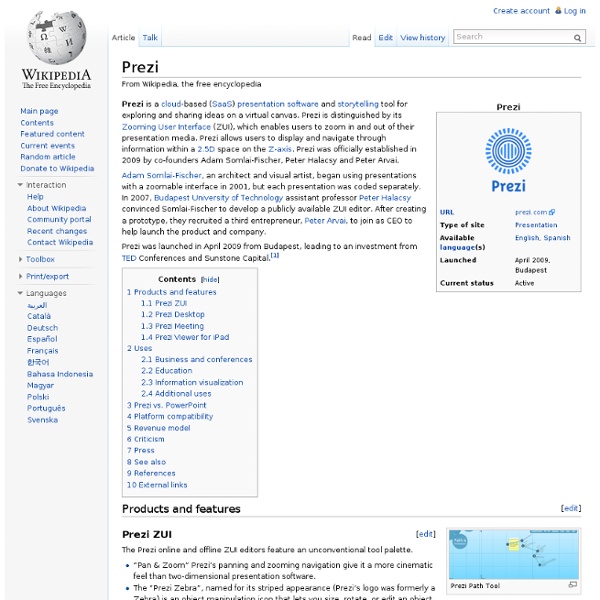 Prezi is a cloud-based (SaaS) presentation software and storytelling tool for presenting ideas on a virtual canvas.[1][2][3][4][5] The product employs a zooming user interface (ZUI), which allows users to zoom in and out of their presentation media, and allows users to display and navigate through information within a 2.5D or parallax 3D space on the Z-axis. Prezi was officially established in 2009 by co-founders Adam Somlai-Fischer, Peter Halacsy and Peter Arvai. History[edit] Prezi (or Prezi.com) was created by the support of Kitchen Budapest and Magyar Telekom in 2008 in order to replace the ordinary slide based presentations. Today the project is assisted by Sunstone Capital.[citation needed] The actual development was done by Zui Labs led by its three Hungarian founders Péter Árvai, Szabolcs Somlai-Fischer and Péter Halácsy. Products and features[edit] Prezi Path Tool Prezi ZUI[edit] Prezi Desktop[edit] Prezi Collaborate[edit] Prezi Viewer for iPad[edit] Revenue model[edit] Uses[edit] Related:  History of Prezi • LEC Recommended TOOLS

Using ZUI(Zooming User Interface) SlideShare The website gets an estimated 58 million unique visitors a month,[7] and has about 16 million registered users.[citation needed] SlideShare was voted among the World's Top 10 tools for education & e-learning in 2010.[8][9] SlideShare's biggest competitors include Scribd.com, Issuu and Docstoc. Some of the notable users of SlideShare include The White House, NASA, World Economic Forum, State of Utah, O'Reilly Media, Hewlett Packard and IBM. §Zipcasts[edit] In February 2011 SlideShare added a feature called Zipcasts.[10] A Zipcast is a social web conferencing system that allows presenters to broadcast an audio/video feed while driving the presentation through the Internet. Zipcasts also allows users to communicate during the presentation via an inbuilt chat function. Zipcasts do not currently support screen sharing with the presenter, a feature available in competing paid services like WebEx and GoToMeeting. §Founding Team[edit] §In the news[edit] §References[edit] §External links[edit]

funded in 2009 YouTube YouTube is a video-sharing website, created by three former PayPal employees in February 2005 and owned by Google since late 2006, on which users can upload, view and share videos.[4] The company is based in San Bruno, California, and uses Adobe Flash Video and HTML5 technology to display a wide variety of user-generated and corporate media video content, including video clips, TV clips, and music videos, and amateur content such as video blogging, short original videos, and educational videos. Most of the content on YouTube has been uploaded by individuals, but media corporations including CBS, the BBC, Vevo, Hulu, and other organizations offer some of their material via YouTube, as part of the YouTube partnership program.[5] Unregistered users can watch videos, and registered users can upload an unlimited number of videos. Videos considered to contain potentially offensive content are available only to registered users affirming themselves to be at least 18 years old. Company history

2.5D 2.5D ("two-and-a-half-dimensional"), ¾ perspective and pseudo-3D are terms, mainly in the video game industry, used to describe either 2D graphical projections and similar techniques used to cause a series of images (or scenes) to simulate the appearance of being three-dimensional (3D) when in fact they are not, or gameplay in an otherwise three-dimensional video game that is restricted to a two-dimensional plane. Common in video games, these projections have also been useful in geographic visualization (GVIS) to help understand visual-cognitive spatial representations or 3D visualization.[1] The terms ¾ perspective and ¾ view trace their origins to portraiture and facial recognition, where they are used to describe a view of a person's face which is partway between a frontal view and a side view.[2] Computer graphics[edit] Axonometric & oblique projection[edit] Lincity tiles 2D axonometric graphical elements to create a 2.5D game environment. Anatomy of an axonometric sprite. Mode 7[edit]

Getting Things Done The GTD method rests on the idea of moving planned tasks and projects out of the mind by recording them externally and then breaking them into actionable work items. This allows attention to be focused on taking action on tasks, instead of recalling them.[2] First published in 2001, a revised edition of the book was released in 2015 to reflect the changes in information technology during the preceding decade. Themes[edit] Allen first demonstrates stress reduction from the method with the following exercise, centered on a task that has an unclear outcome or whose next action is not defined. He claims stress can be reduced and productivity increased by putting reminders about everything you are not working on into a trusted system external to your mind. Workflow[edit] Logic tree diagram illustrating the second and third steps (process/clarify and organize) of the five-step Getting Things Done workflow. Next, reflection (termed planning in the first edition) occurs. Implementation[edit]

Twitter History Creation and initial reaction Twitter's origins lie in a "daylong brainstorming session" held by board members of the podcasting company Odeo. ...we came across the word 'twitter', and it was just perfect. The first Twitter prototype, developed by Dorsey and contractor Florian Weber, was used as an internal service for Odeo employees[20] and the full version was introduced publicly on July 15, 2006.[8] With Twitter, it wasn't clear what it was. Reaction at the conference was highly positive. The first unassisted off-Earth Twitter message was posted from the International Space Station by NASA astronaut T. In August 2010, the company appointed Adam Bain from News Corp.' Growth The company experienced rapid growth. Jack Dorsey, a co-founder and the chairman of Twitter, in 2009 Twitter's usage spikes during prominent events. Twitter acquired application developer Atebits on April 11, 2010. On February 21, 2012, it was announced that Twitter and Yandex agreed to a partnership. Leadership

LinkedIn LinkedIn /ˌlɪŋkt.ˈɪn/ is a business-oriented social networking service. Founded in December 2002 and launched on May 5, 2003,[3] it is mainly used for professional networking. In 2006, LinkedIn increased to 20 million viewers.[7] As of June 2013[update], LinkedIn reports more than 259 million acquired users in more than 200 countries and territories.[2][8] History[edit] LinkedIn's CEO is Jeff Weiner,[2] previously a Yahoo! Founder Reid Hoffman, previously CEO of LinkedIn, is now Chairman of the Board.[2][15] LinkedIn is headquartered in Mountain View, California, with offices in Omaha, Chicago, New York, London, and Dublin. In late 2003, Sequoia Capital led the Series A investment in the company.[20] In June 2008, Sequoia Capital, Greylock Partners, and other venture capital firms purchased a 5% stake in the company for $53 million, giving the company a post-money valuation of approximately $1 billion.[21] 2011: IPO[edit] Acquisitions[edit] Membership[edit] Features[edit] Applications[edit]

Facebook This article is about the social networking service. For the type of directory, see face book. Facebook (formerly [thefacebook]) is an online social networking service headquartered in Menlo Park, California. Facebook was founded on February 4, 2004, by Mark Zuckerberg with his college roommates and fellow Harvard University students Eduardo Saverin, Andrew McCollum, Dustin Moskovitz and Chris Hughes.[7] The founders had initially limited the website's membership to Harvard students, but later expanded it to colleges in the Boston area, the Ivy League, and Stanford University. It gradually added support for students at various other universities and later to high-school students. Facebook now allows anyone who claims to be at least 13 years old to become a registered user of the website.[8] Its name comes from a colloquialism for the directory given to it by American universities students.[9] History College-only service Service available to the general public Initial public offering

TED (conference) TED (Technology, Entertainment, Design) is a global set of conferences owned by the private non-profit Sapling Foundation, under the slogan "ideas worth spreading". TED was founded in 1984 as a one-off event.[1] The annual conference began in 1990, in Monterey, California.[4] TED's early emphasis was technology and design, consistent with its origins in the Silicon Valley. Since June 2006,[1] the talks have been offered for free viewing online, under Attribution-NonCommercial-NoDerivs Creative Commons license, through TED.com.[8] As of April 2014, over 1,700 talks are available free online.[9] By January 2009 they had been viewed 50 million times. In June 2011, the viewing figure stood at more than 500 million,[10] and on Tuesday, November 13, 2012, TED Talks had been watched one billion times worldwide.[11] TED's mission statement begins: We believe passionately in the power of ideas to change attitudes, lives and ultimately, the world. The TED Prize was introduced in 2005.