Overview. Windows 10 Upgrade. Control Your Android Phone From Windows 10 Using Cortana, Here's How. Advertisements The world of the digital personal assistant is just starting to get interesting with the arrival of Cortana on desktops and tablets thanks to Windows 10, and while mobile has long had the likes of Cortana, Siri and Google Now around, we have a feeling that only now are things about to truly spring to life. 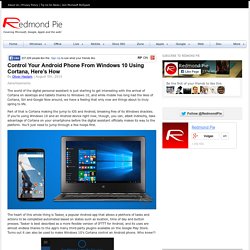 Part of that is Cortana making the jump to iOS and Android, breaking free of its Windows shackles. If you’re using Windows 10 and an Android device right now, though, you can, albeit indirectly, take advantage of Cortana on your smartphone before the digital assistant officially makes its way to the platform. You’ll just need to jump through a few hoops first. The heart of this whole thing is Tasker, a popular Android app that allows a plethora of tasks and actions to be completed automated based on states such as location, time of day and button presses. To set it up on your phone and PC, here’s what you need to do: Give it a whirl and see how you find it. After the Windows 10 installation, the clean-up. Yesterday I shared with you my recommendations for the first five things you should update and customize after installing your upgrade to Windows 10 after tomorrow’s general release. 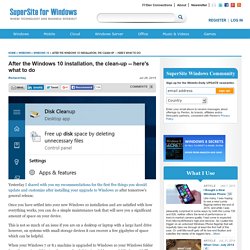 Once you have settled into your new Windows 10 installation and are satisfied with how everything works, you can do a simple maintenance task that will save you a significant amount of space on your device. This is not so much of an issue if you are on a desktop or laptop with a large hard drive however, on systems with small storage devices it can recover a few gigabytes of space which can be helpful. When your Windows 7 or 8.1 machine is upgraded to Windows 10 your Windows folder from the previous OS is stored on your hard drive in a folder named Windows.old.

The files in this folder are used to revert back to your old OS if there is any issue in Windows 10 during the upgrade. The Windows.old folder cannot be manually deleted as it will result in an error since it is a system level folder. Let me explain. Windows 10 review: It's familiar, it's powerful, but the Edge browser falls short. (Editor’s Note: As promised, we’ve revisited the review with the “release” version of Windows 10, which Microsoft began pushing to PCs on July 29. 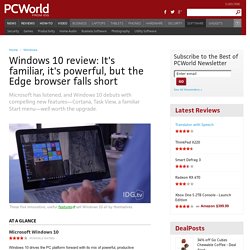 Minor updates are scattered throughout, with emphasis on the Windows Hello and Edge sections and bugs that were present in earlier code.) We may as well refer to Windows 10 as a date, or an hour, as much as an operating system. It’s a moment in time. A month from now, it will have changed, evolved, improved. But right now? (Changed, evolved, improved—that sounds a lot like the Microsoft Windows 10 Anniversary Update, which we’ve also reviewed. There’s a lot to cover, so feel free to dive in—or click one of the links below to jump to a specific part of the review. 2. 3. 4. 5. 6. 7. 8. How to Do a Clean Install of Windows 10. Windows 10 laptops and tablets: Your upgrade guide. Windows 10 is responsible for a frenzy of PC vendor activity, with laptop and tablet makers announcing product upgrades, touting key new features, and generally trying to re-energise the market. 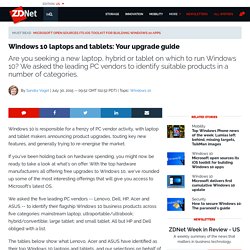 If you've been holding back on hardware spending, you might now be ready to take a look at what's on offer. With the top hardware manufacturers all offering free upgrades to Windows 10, we've rounded up some of the most interesting offerings that will give you access to Microsoft's latest OS. We asked the five leading PC vendors -- Lenovo, Dell, HP, Acer and ASUS -- to identify their flagship Windows 10 business products across five categories: mainstream laptop; ultraportable/ultrabook; hybrid/convertible; large tablet; and small tablet.

All but HP and Dell obliged with a list. The tables below show what Lenovo, Acer and ASUS have identified as their top Windows 10 laptops and tablets, and our selections on behalf of Dell and HP.