The End of Education As We Know It 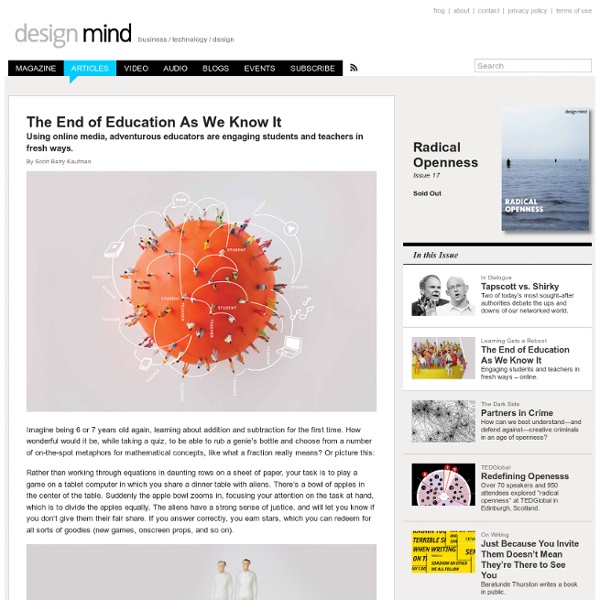 By Scott Barry Kaufman Imagine being 6 or 7 years old again, learning about addition and subtraction for the first time. How wonderful would it be, while taking a quiz, to be able to rub a genie’s bottle and choose from a number of on-the-spot metaphors for mathematical concepts, like what a fraction really means? Or picture this: Rather than working through equations in daunting rows on a sheet of paper, your task is to play a game on a tablet computer in which you share a dinner table with aliens. These examples may seem charming and even silly—and they’re meant to be. The new wave of educational tools include fresh ways of deploying phone and tablet apps, online games and videos, and social networking. “We should try to bring back the joy of learning because you want to learn, not because someone is going to give you a grade at the end of the semester,” Schocken said in a recent interview. No Wrong Answers All of this engagement on a huge scale has resulted in rich and copious data. Related:  Ed Reform • Instructional Design • Teaching Social Science

Get Ready For America’s Next ‘Education Crisis’ - Jeff Bryant “You never want a serious crisis to go to waste,” has become a popular mantra of the ruling class. Of course, these are not the people who usually experience the brunt of a crisis. But a pervasive narrative in the mainstream media is that Americans are a people beset by near-continuous crisis, whether it’s the fake crisis of a looming “fiscal cliff” or a real crisis like Frankenstorm Sandy that still has many Northeasterners inexplicably living in the dark in unheated homes. Arguably no sector of American society has been cast with the narrative of crisis as much as public education. Something’s Rotten In The State Of Kentucky Just prior to the November election, an article in the education trade journal Education Week broke that Kentucky had gotten bad news back from its most recent round of school tests. Disappointing results from a state test is not usually an occasion to stop the presses. In fact, some people are betting good money on that happening. Business Loves A Crisis

Traditional training structures are changing Citrix GoToTraining has just released a paper I was commissioned to write, called What’s working and what’s not in online training. Here is the introduction, and you can read the rest at the link. I will be following up on some of the themes I discuss in this paper in the coming weeks. The new challenge for learning professionals The novelist William Gibson said, “The future is already here – it’s just not evenly distributed.” One thing is obvious, however: Learning is becoming more collaborative. Silicon Valley and Ivy League schools are opening up their courses for free online. Learning management systems have become talent management or social collaboration systems as they try to increase their relevance beyond training. From this, it’s clear — traditional training structures, based on institutions, programs, courses and classes, are changing.

5 Great TED Talks for Teachers As you probably know, this year's TED 2013 prize went to Sugata Mitra for his outstanding wish " School in The Cloud ". Digging through the achievements of this educational researcher, I found out that Sugatra is behind the popular Hole in The Wall experiments that proved that kids learn more in the absence of adult supervision and formal teaching. For Sugatra peer interest and curiosity are the main drives for kids' effective learning . The central idea behind hole-in-the-wall is that groups of children learn on their own without any direct intervention. This was conceptually explained by Dr Sugata Mitra, Chief Scientist of NIIT, as Minimally Invasive Education (MIE). He found that children using Learning Stations required little or no inputs from teachers and learnt on their own by the process of exploration, discovery and peer coaching. One of the things that stood out to me when I read that paragraph above is the MIE concept. 1- Sugatra : Build A School in The Cloud

Uncomfortable Conversations in Education Click to enlarge. In the past week I have read a couple of posts that mention the importance of uncomfortable conversations in education. Having uncomfortable or unpopular conversations is kryptonite for the echo chamber effect that often plagues meetings, conferences, chats and any other space, online and off, that brings people together. In a recent reflection Going Beyond the Converted: Reflections from Edcamp Leadership BC Aaron Akune, Vice-Principal at Delta Secondary School in Ladner B.C asks “Why is it that we continue to repeat the same conversations?” I’d argue that too often we are afraid to wade into uncomfortable conversations where we may be challenged to justify and defend our positions. Aaron highlights three important points: 1. I think it’s ok that we keep having these same discussions. Our rehashing of decades old topics also suggests that we are still invested and that is a good thing. 2. 3.

Transforming learning and development In a series of posts on the Onlignment blog that has run throughout 2012, I have endeavoured to explain how transformation can take place in workplace learning and development. I then set out a vision for workplace learning and development that is: I moved on to look at some of the changes that can be made to realise this vision, expressed as six shifts: I brought the series to a conclusion by focusing on the practical steps that we can take to make transformation happen: Recognising the uniqueness of your particular organisation in terms of its requirements, the characteristics of its people and the constraints which govern its decision making.Establishing a learning architecture and infrastructure that recognises these unique characteristics.Putting in place processes for improved performance needs analysis and blended solution design.Building capability in areas such as the design of digital learning content, learning live and online, and connected online learning. Enjoy!

NATO - Topic: Member countries The founding members On 4 April 1949, the foreign ministers from 12 countries signed the North Atlantic Treaty (also known as the Washington Treaty) at the Departmental Auditorium in Washington, D.C.: Belgium, Canada, Denmark, France, Iceland, Italy, Luxembourg, the Netherlands, Norway, Portugal, the United Kingdom and the United States. Within the following five months of the signing ceremony, the Treaty was ratified by the parliaments of the interested countries, sealing their membership. The 12 signatories Some of the foreign ministers who signed the Treaty were heavily involved in NATO’s work at a later stage in their careers: Belgium: M. Flexibility of NATO membership On signing the Treaty, countries voluntarily commit themselves to participating in the political consultations and military activities of the Organization. Iceland When Iceland signed the Treaty in 1949, it did not have – and still does not have – armed forces. France The accession of Greece and Turkey The accession of Spain

Moving beyond our vacuous education reform discussions | Reihan Salam Barack Obama is a champion of education reform. So is Mitt Romney. Even in the midst of an extremely polarized political season, the former Massachusetts governor has offered praise for Arne Duncan, President Obama’s secretary of education, and for the Obama administration’s Race to the Top initiative. The same is true of Jeb Bush, the former Florida governor, who has emerged as the GOP’s leading point person on fixing America’s schools. The reform label applies to at least three broad ideas: (1) standards-oriented reform, or let’s have more testing and accountability; (2) human capital reform, or let’s have better teachers; and (3) choice-oriented reform, or let’s use “backpack funding” that will allow public education dollars to follow the student wherever she chooses to enroll, whether it’s a neighborhood public school, a public charter or (perhaps) a voucher-eligible private school. That shouldn’t come as a shock. Relinquishers remain a small minority in the education world.

Professional Learning: The SCOPE Approach and Plan Professional Learning is often seen as something that takes place outside the workplace. In fact as most organizations only focus on training individuals to do their basic duties, there is a strong need for individuals to take responsibility for their own professional learning (outside their organisation) and constantly update their knowledge and skills to remain marketable, as I pointed out in The future belongs to those who take charge of their own learning. However, if professional learning is encouraged and supported by an organization, it can benefit immensely from the continuous learning of its employees. I recommend the SCOPE approach to Professional Learning planning. Self-regulated: The individual is in the driving seat. Continuous: It involves a continuous (daily/weekly) approach to professional learning, rather than attending one-off, ad hoc “learning events” on an irregular basis Objective-led: What is learned is driven by an individual’s own professional objectives.

America's Historical Documents The National Archives preserves and provides access to the records of the Federal Government. Here is a sample of these records, from our most celebrated milestones to little-known surprises . Declaration of Independence Articles of Confederation List of Lewis's Purchases District of Columbia Emancipation Emancipation Proclamation Edison's Light Bulb Patent FDR's "Day of Infamy" Speech Brown v. A Letter from Jackie Robinson Elvis's Letter to President Nixon Schools We Can Envy by Diane Ravitch Finnish Lessons: What Can the World Learn from Educational Change in Finland? by Pasi Sahlberg, with a foreword by Andy Hargreaves Teachers College Press, 167 pp., $34.95 (paper) In recent years, elected officials and policymakers such as former president George W. Bush, former schools chancellor Joel Klein in New York City, former schools chancellor Michelle Rhee in Washington, D.C., and Secretary of Education Arne Duncan have agreed that there should be “no excuses” for schools with low test scores. The “no excuses” reformers maintain that all children can attain academic proficiency without regard to poverty, disability, or other conditions, and that someone must be held accountable if they do not. Nothing is said about holding accountable the district leadership or the elected officials who determine such crucial issues as funding, class size, and resource allocation. It is not unusual for Americans to hold up another nation as a model for school reform.