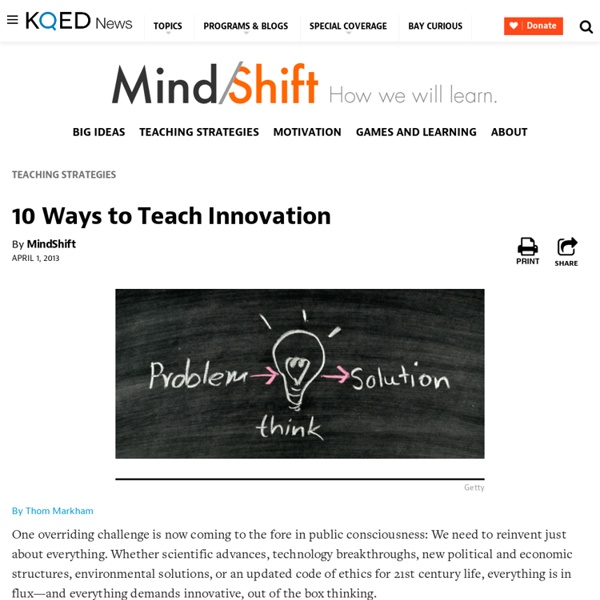 Getty By Thom Markham One overriding challenge is now coming to the fore in public consciousness: We need to reinvent just about everything. Whether scientific advances, technology breakthroughs, new political and economic structures, environmental solutions, or an updated code of ethics for 21st century life, everything is in flux—and everything demands innovative, out of the box thinking. The burden of reinvention, of course, falls on today’s generation of students. So it follows that education should focus on fostering innovation by putting curiosity, critical thinking, deep understanding, the rules and tools of inquiry, and creative brainstorming at the center of the curriculum. This is hardly the case, as we know. Move from projects to Project Based Learning. Teach concepts, not facts. Distinguish concepts from critical information. Make skills as important as knowledge. Form teams, not groups. Use thinking tools. Use creativity tools. Reward discovery. Be innovative yourself. Related

10 Techy Icebreakers for The 21st Century Teacher Here are some great icebreakers you can work on using technology : 1- Self PortraitHave your students draw themselves. After they have done this, collect the papers and hang them up for the whole class to see. Now have students try to guess who the artists was for each picture. 197 Educational YouTube Channels You Should Know About 197 Educational YouTube Channels You Should Know About If you don’t have a YouTube channel as an education provider, there’s a good chance you’re behind the times. Nearly every major educational institution in the world now hosts its own collection of videos featuring news, lectures, tutorials, and open courseware. Just as many individuals have their own channel, curating their expertise in a series of broadcasted lessons.

The New Art of the Possible Embracing new technology and having an open and curious mindset is the key for not only growth but survival in every industry today. I cannot think of one industry that has not felt the distributive effects of new technologies and the rate of social adaptation. I deliberately don’t call it adoption as this is a term for “Systems of Record”. We now have “Systems of Engagement” (thanks Geoffrey Moore) and they are defined by our social interaction and creativity.

At the Movies: Films Focused on Education Reform Beyond Measure (2015)Beyond Measure follows three different sets of teachers and students as they grapple with the realities of public education and try to enact meaningful change in their own education communities. As in her previous film, the popular documentary Race to Nowhere, director Vicki Abeles focuses on the stress caused by high-stakes testing and how alternative teaching methods, such as project-based learning, can alleviate that stress. (Source: Beyond Measure website)Find more information about the film and screenings in your area on the film's website. Previously Featured Films Most Likely to Succeed (2015)

Wisdom Networks! Opportunity? What? Why? Where? How? Wisdom Networks crowd create Network Society and accelerate the Wisdom of Crowds (r)evolution for health, education, equity market, innovation, organisations, countries and regions. Everyone can see and act on every “thing”, everywhere, anytime. Telewisdom accelerates “The Shift” to the next stage of economic development by organising people, processes and things across the “Internet of Everything”. The Difference Between Pedagogy, Andragogy, And Heutagogy The Difference Between Pedagogy, Andragogy, And Heutagogy by Terry Heick Jackie Gerstein’s passionate thinking about learning is some of my favorite to read. She is rarely pulled down by trend or fad, but is unquestionably progressive and forward-thinking in her approaches to learning and thinking about learning.

Those who get involved in social movements share a common experience: Sometimes, when an issue captures the public eye or an unexpected event triggers a wave of mass protest, there can be periods of intense activity, when new members rush to join the cause and movement energy swells. But these extraordinary times are often followed by long, fallow stretches when activists’ numbers dwindle and advocates struggle to draw any attention at all. During these lulls, those who have tasted the euphoria of a peak moment feel discouraged and pessimistic. The ups and downs of social movements can be hard to take. Certainly, activists fighting around issues of inequality and economic justice have seen this pattern in the wake of Occupy Wall Street. Many working to combat climate change have encountered their own periods of dejection after large protests in recent years.

Tips for Commenting on Student Writing Instructors who require their students to write papers dedicate many hours each semester to reading, commenting on, and grading student writing, and they often wonder if the time they have spent translates into improvements in their students' writing skills. For their part, students want constructive feedback on their writing and often express frustration when they find their instructors' comments on their papers to be mysterious, confusing, or simply too brief. The following tips can help you improve the effectiveness and efficiency with which you respond to your students' writing. These tips focus on the process of writing comments on students' papers (whether on rough drafts or final drafts), rather than on the process of grading papers.

How Can We Harness the Power of Learning Beyond the School Day? Discussions of learning tend to focus on what happens in schools, but many students are learning lots of important skills outside of school through extracurriculars like sports, music, art, politics or any other passion. Often students don’t get recognition for the learning they pursue on their own, and many times they don’t even see their passion as learning at all. The Chicago City of Learning project is trying to meet that need by helping connect youth to resources that support their interests and provide validation for the hard work that goes into learning outside the academic setting. Chicago City of Learning started in 2013, growing out of a prolonged teachers strike that prompted the city to think about how it could connect its youth to non-school constructive activities that they might be able to get credit for later. At first the program focused on the summer months, when kids are out of school and looking for opportunities to fill their time.