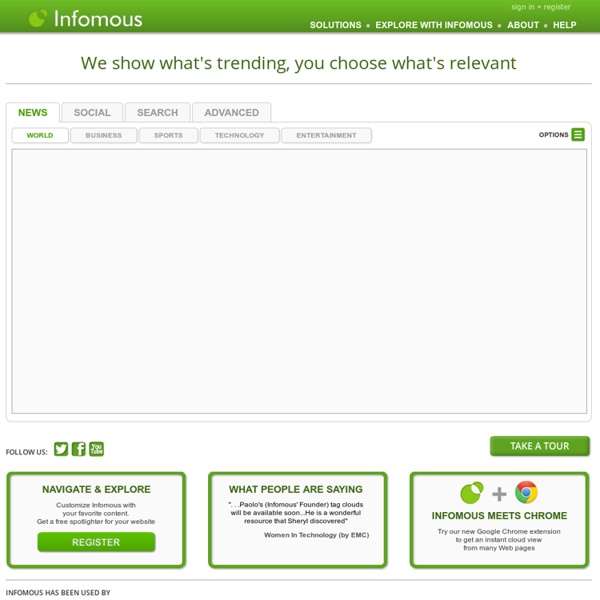 Infomous is a revolutionary way to explore online content visually. Add Infomous on your site to engage readers, increase circulation and generate revenues. Create an Infomous cloud with your content and embed it on your site. See How to Embed Infomous

Powerful tool for creating web surveys. Online survey software made easy! SurveyMonkey™ Thanks for completing this survey.Now create your own—it's free, quick & easy! Create free surveys in just a few minutes Ask questions in over 15 formats(configured for you and ready to go!) Get answers to any type of question Register with SurveyMonkey today! Download GanttProject License GanttProject is free software. Code which is written by GanttProject authors and contributors is distributed under the terms of GNU General Public License version 3 (GPL 3) . We also use a number of libraries with different licenses which are known to be compatible with GPL 3.

Guest Post: Trends in mobile advertising for 2013 GoMo News by Aaron Peters, a blogger who works with Superscholar As so many people now have smartphones, it’s becoming more and more popular to use them as a medium for advertising. With 2013 now on us, I decided to do some research as to what pundits are saying which are the most likely mobile advertising trends we can expect to see in 2013. Links Links Blogs abegglenKings of WarClausewitz - Economistoffiziere.ch

Military Theory of War, Warfare Theory, Principles of War, Military Strategy, Theories, Theorists Never neglect the psychological, cultural, political, and human dimenstions of warfare, which is inevitably tragic, inefficient, and uncertain. Be skeptical of systems analysis, computer models, game theories, or doctrines that suggest otherwise. --- Secretary of Defense Robert Gates, speech at NDU, 29 Sep 2008 Read and reread the campaigns of Alexander, Hannibal, Caesar, Gustaphus Adolphus, Turenne and Frederick; take them as your model; that is the only way of becoming a Great Captain, to obtain the secrets of the art of war.