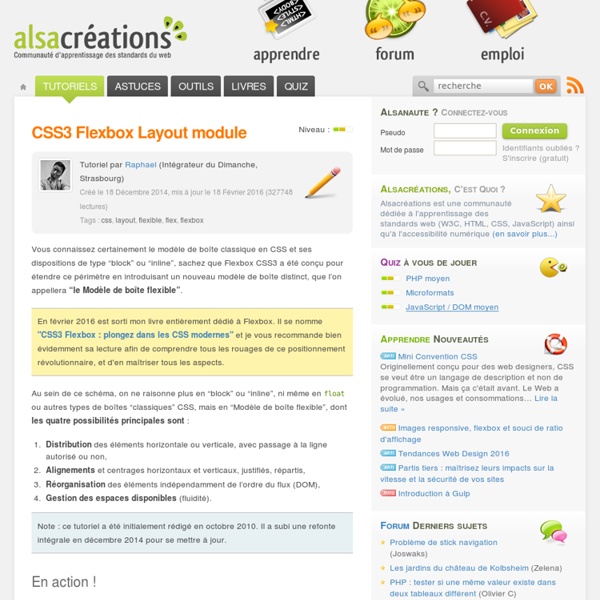 Flexbox — Fast Track to Layout Nirvana? Introduction HTML and CSS is a great content delivery mechanism in many ways — it is easy to learn, flexible and powerful. One thing however that it has never excelled at is complex layouts. If you want to create a simple typographic essay layout with a floated image or two, then fine, but producing complicated multi column layouts has always been fiddly and hackish, and frustrating to get working consistently and precisely across browsers. We usually tend to abuse floats and other constructs for this purpose, and bugs and rendering differences can really spoil your fun.

Using SVG Learn Development at Frontend Masters SVG is an image format for vector graphics. It literally means Scalable Vector Graphics. Basically, what you work with in Adobe Illustrator. You can use SVG on the web pretty easily, but there is plenty you should know. Why use SVG at all? Using Flexbox: Mixing Old and New for the Best Browser Support By Chris Coyier On Flexbox is pretty awesome and is certainly part of the future of layout. The syntax has changed quite a bit over the past few years, hence the "Old" and "New" syntax. But if we weave together the old, new, and in-between syntaxes, we can get decent browser support. Especially for a simple and probably the most common use case: order-controlled grids

Handy Sass Mixins - Web Design Weekly Mixins are one of the most powerful features of Sass. Mixins allow for efficient and clean code repetitions as well as an easy way to adjust your code with ease. If you are using Sass in your development workflow, no doubt you are using some of the mixins that I have covered below but some might also be new and helpful.

How Flexbox works — explained with big, colorful, animated gifs Flexbox promises to save us from the evils of plain CSS (like vertical alignment). Well, Flexbox’s deliver on that goal. But mastering its new mental model can be challenging. So let’s take an animated look at how Flexbox works, so we can use it to build better layouts. Flexbox’s underlying principle is to make layouts flexible and intuitive. Using source maps with Sass 3.3 One of the exciting new features in Sass 3.3 that every developer should take advantage of is source maps. As CSS pre-processors, minifiers, and JavaScript transpilers have become mainstream it is increasingly difficult to debug the code running in the browser because of differences with the original source code. For example, if you use CoffeeScript (which compiles to JavaScript) you won't see CoffeeScript while debugging in the browser. Instead, you'll see compiled JavaScript.

Understanding Flexbox: Everything you need to know – freeCodeCamp Doesn’t that look pretty? I’ll get into the inner workings of Flexbox while you learn to build the music app layout. You’ll also get a feel for the role Flexbox plays in responsive web design, too. I’m excited to show you all this. But before you get started building user interfaces, I’m going to walk you through some drills, first. Live Editing Sass and Less in the Firefox Developer Tools Sass and Less are expressive languages that compile into CSS. If you’re using Sass or Less to generate your CSS, you might want to debug the source that you authored and not the generated CSS. Luckily you can now do this in the Firefox 29 developer tools using source maps.