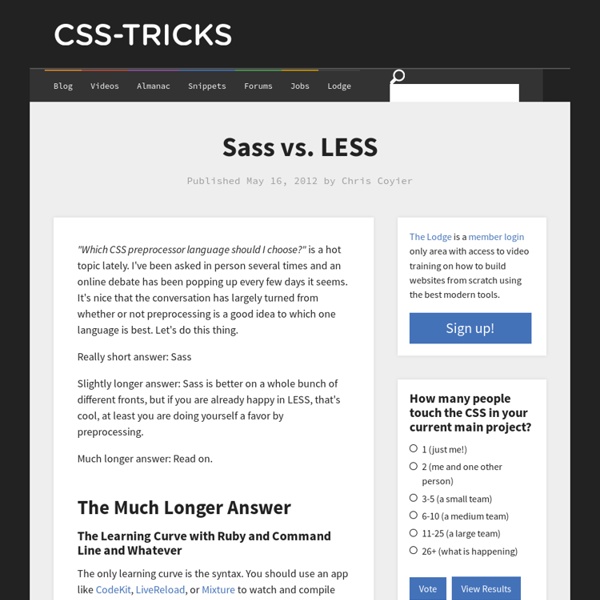 "Which CSS preprocessor language should I choose?" is a hot topic lately. I've been asked in person several times and an online debate has been popping up every few days it seems. It's nice that the conversation has largely turned from whether or not preprocessing is a good idea to which one language is best. Let's do this thing. Really short answer: Sass Slightly longer answer: Sass is better on a whole bunch of different fronts, but if you are already happy in LESS, that's cool, at least you are doing yourself a favor by preprocessing. Much longer answer: Read on. The Much Longer Answer The Learning Curve with Ruby and Command Line and Whatever The only learning curve is the syntax. Winner: Nobody Helping with CSS3 With either language, you can write your own mixins to help with vendor prefixes. In Sass, you can use Compass, and Compass will keep itself updated, and thus the prefix situation is handled for you. In LESS, there are also some mixin libraries battling to be the best. See that?

CSS Tutorials - CSS Repeating Backgrounds | Jacorre Are you looking for a repeating background using CSS? This tutorial will teach you how to create 3 different css repeating backgrounds: horizontal, vertical and tiled. Let’s start with a horizontal repeating background. This would be a background image that repeats itself left to right. For example, let’s say we want to create the following horizontal bars at the top of a webpage: Can’t Get Into Preprocessors? Try Zen Coding A ton of discussion lately has been given to preprocessors. These incredibly useful tools make coding easier, faster and more maintainable, but they’re certainly not for everyone. Whether or not you’ve jumped on the preprocessor bandwagon, you should give a fresh look to an old favorite that helps you dramatically cut your coding time without reinventing your workflow with compilers and other complications: Zen Coding. With Zen Coding, you can type a little and output a lot, just like with a preprocessor like Jade or Haml, only it expands instantly into the vanilla HTML that you love. For those that are new to the concept, I’ll walk you through how Zen Coding works and show you some of my favorite tricks, then end with a brief tutorial on getting Zen Coding up and running in Sublime Text 2. Zen Coding vs.

11 Tools to Instantly Code Faster Twice a month, we revisit or update some of our readers’ favorite posts and sessions from throughout the history of Nettuts+. This tutorial was first published last September. Doesn't the title say it all? There are a wide variety of tools and techniques which can drastically improve the speed at which we code.

Quick Tip: Understanding CSS3 Gradients Creating an image only for the purpose of displaying a gradient is inflexible, and is quickly becoming a bad practice. Unfortunately, at the time of this writing, they very well might still be required, but hopefully not for much longer. Thanks to Firefox and Safari/Chrome, we can now create powerful gradients with minimal effort. In this video quick tip, we'll examine some of the differences in syntax when working with the -moz and -webkit vendor prefixes. While Mozilla and Webkit generally adopt the same syntax for CSS3 properties, they unfortunately don't quite agree when it comes to gradients. Webkit was first to embrace gradients, and uses the following structure:

How to create sliding feedback form using jQuery In this tutorial we are going to learn how to create fancy looking feedback form which slides from the right/left side of your web page. I am sure there are many plugins available for CMS like Joomla, WordPress but it’s always a good idea to code something of your own. Certainly, you require this code when you are developing everything at your own and not using any kind of CMS. So let’s see how it actually works! Watch Live Demo | Download Source Code

High speed Coding with Zen & SASS - Web Design & Frontend Developement The Power of Awesome Frontend Development is experiencing golden times these days. With the hype on HTML5, CSS3, a brighter focus on JavaScript and sophisticated workflows, the process of creating great stuff on the web has never been more rewarding.

Stripes in CSS Stripes are pretty easy to do in CSS these days. CSS gradients via the background-image property really got our back. I thought I'd document some variations in one easy to reference place. Normal Colored Diagonal Stripes Diagonal stripes are easy to pull off thanks to repeating-linear-gradient(): Extreme programming Planning and feedback loops in extreme programming. Extreme programming (XP) is a software development methodology which is intended to improve software quality and responsiveness to changing customer requirements. As a type of agile software development,[1][2][3] it advocates frequent "releases" in short development cycles, which is intended to improve productivity and introduce checkpoints at which new customer requirements can be adopted. Critics have noted several potential drawbacks,[5] including problems with unstable requirements, no documented compromises of user conflicts, and a lack of an overall design specification or document.

5 Mac Apps That Make CSS Preprocessors Easier to Use This post is part of a series that revisits some of our readers’ favorite articles from the past that still contain awesome and relevant information that you might find useful. This post was originally published on December 20th, 2011. If you’re a fan of CSS preprocessors, then you know that despite their usefulness, they can be a bit of a pain to work with at times. Most of them require some sort of Terminal voodoo to compile, which immediately scares off a good portion of potential users. As always, the Mac development community has come to the rescue with some amazing tools that completely take the effort out of the process. Follow along as we take a look at five great apps that will help you work with LESS, Sass, Stylus and even some non-CSS languages like CoffeeScript and HAML.

CSS Gradients This article was originally published on March 2, 2010. It was updated April 1, 2011, July 20, 2011, and again March 3, 2014, each time to clarify and correct browser prefixes and best practices. Just as you can declare the background of an element to be a solid color in CSS, you can also declare that background to be a gradient. 40 Useful HTML5 Tutorials, Techniques and Examples Toolkits HTML5 right after its arrival has been in the news because of its enhanced functionality and ease of use. And now the latest version of HTML5 is out, web developers and internet marketers are shifting to HTML5 as it comes with several new and improved features that distinctly make Web development easier. In this collection, we are sharing some useful HTML5 tutorials with our designing and development fraternities to help them learn the new ways to get web pages SEO friendly and more interactive.