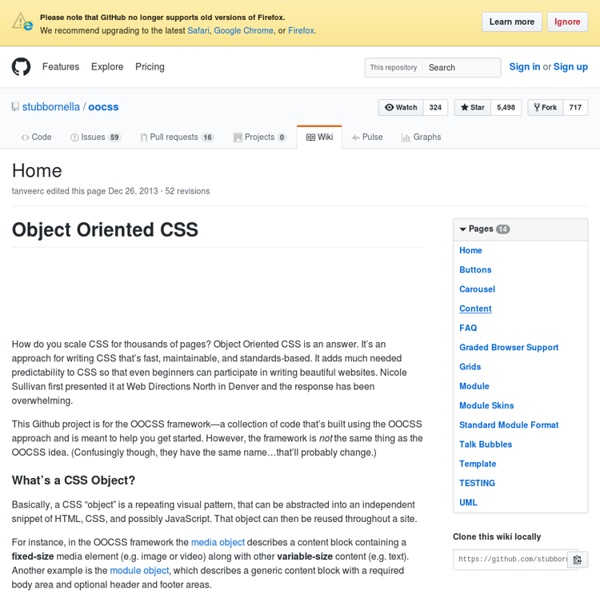 CSS Style Guides As we wrap up our recent poll on ordering CSS properties, it brings up the larger issue of CSS style guides. Ordering properties is just one choice you have to make that makes up a complete styling strategy. Naming is a part of it. Sectioning is a part of it. Let's round up some existing ones. But first... I love pattern libraries. The List I'll list some excerpts from each that I like below. GitHub GitHub CSS Style Guide → As a rule of thumb, don't nest further than 3 levels deep. Unit-less line-height is preferred because it does not inherit a percentage value of its parent element, but instead is based on a multiplier of the font-size. Google Google HTML/CSS Style Guide → Use ID and class names that are as short as possible but as long as necessary. E.g. Do not concatenate words and abbreviations in selectors by any characters (including none at all) other than hyphens, in order to improve understanding and scannability. E.g. .demo-image not .demoimage or .demo_image Idiomatic CSS CSS Wizardry

A Comprehensive Guide to CSS Resets This guide examines the infinite-like variety of CSS resets created by web developers and designers across the world. While almost all of these CSS resets are generally provided free for public use (many through Creative Commons licensing), it is incumbent upon you to check the terms of use before putting them to use in your projects. This guide follows Part 1, where the history of CSS resets was discussed; you’re advised to read that before this one to get the most out of this guide. This is Part 2 of a three-part series of articles on the topic of CSS resets. In putting together this guide, the 2007 collection of resets by Jeff Starr — who, as an aside, has contributed articles on Six Revisions — was used as a jumping-off point. "Hard" Reset As discussed in Part 1 of this series, the original version of the "hard" reset was by web designer Andrew Krespanis: It wasn’t long before folks added border: 0; and outline: 0; to the list of properties, giving us: Poor Man’s Reset Siolon Reset