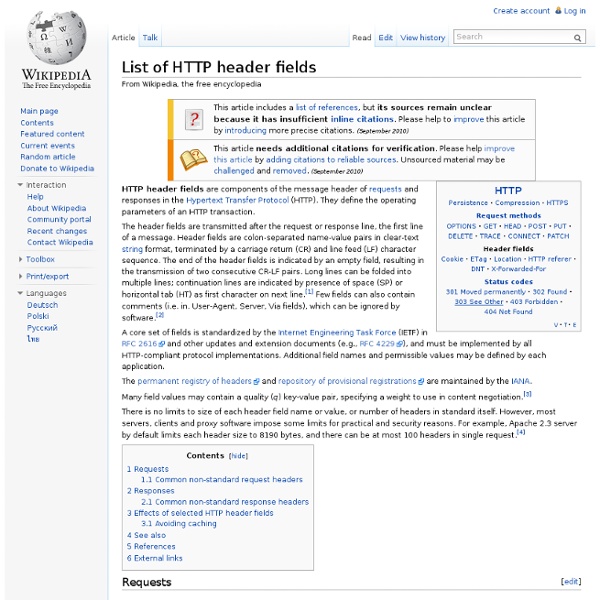 HTTP header fields are components of the message header of requests and responses in the Hypertext Transfer Protocol (HTTP). They define the operating parameters of an HTTP transaction. General format[edit] Field names[edit] A core set of fields is standardized by the Internet Engineering Task Force (IETF) in RFC 2616 and other updates and extension documents (e.g., RFC 4229), and must be implemented by all HTTP-compliant protocol implementations. The permanent registry of headers and repository of provisional registrations are maintained by the IANA. Non-standard header fields were conventionally marked by prefixing the field name with X- .[2] However, this convention became deprecated in June 2012 due to the inconveniences it caused when non-standard headers became standard.[3] A prior restriction on use of Downgraded- has also since been lifted.[4] Field values[edit] A few fields can contain comments (i.e. in User-Agent, Server, Via fields), which can be ignored by software.[5] [edit]

Activating Browser Modes with Doctype In order to deal both with content written according to Web standards and with content written according to legacy practices that were prevalent in the late 1990s, today’s Web browsers implement various engine modes. This document explains what those modes are and how they are triggered. Summary for the Impatient The main conclusion to draw from this article is that you should start all your HTML documents (i.e. anything that gets served as text/html ) with <!DOCTYPE html> as the first thing in the source. (Read on to learn why.) If you want to take extra care to make sure that users of IE8, IE9 or IE10 cannot press a button that makes your site regress as if it was being viewed in IE7, either configure your server to send the HTTP header X-UA-Compatible: IE=Edge for text/html or put <meta http-equiv="X-UA-Compatible" content="IE=Edge"> in the head of your HTML documents (before any scripts). The Scope of This Document The Modes Here are the various modes: Common Modes for text/html Content

HTML.it HTML Entity Character Lookup › Left Logic Created by Left Logic Using HTML entities is the right way to ensure all the characters on your page are validated. However, often finding the right entity code requires scanning through 250 rows of characters. This lookup allows you to quickly find the entity based on how it looks, e.g. like an < or the letter c. Features Search for entity characters based on how they look (taken from the W3C list of entities) Switch between standard and compressed views Copy the HTML entity to the clipboard Add your own keyword terms and characters to entities Settings stored in a browser cookie Available as a Firefox plugin - thanks to Yining To reset the keywords, clear your cookies for this page and the default keyword dictionary. How it works The lookup searches the html entities for matches to the searched character based on how your character looks. There's no clever logic behind this, only the most powerful computer known to man - man's own brain.