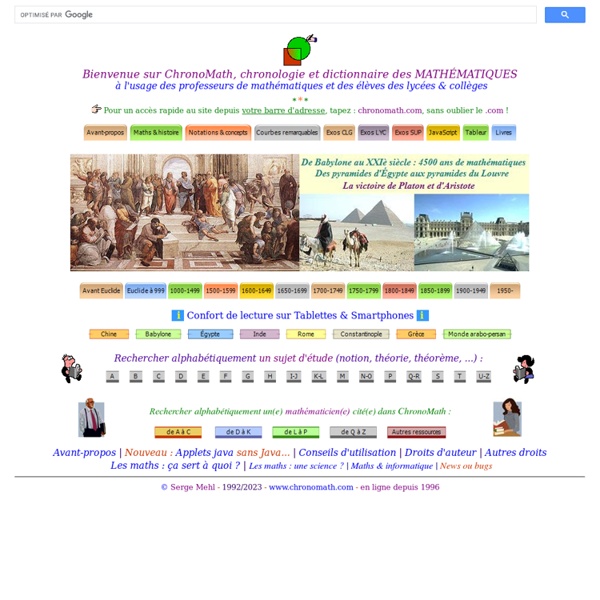 TeX TeX (/ˈtɛx/ or /ˈtɛk/, see below) is a typesetting system designed and mostly written by Donald Knuth[1] and released in 1978. Together with the Metafont language for font description and the Computer Modern family of typefaces, TeX was designed with two main goals in mind: to allow anybody to produce high-quality books using a reasonably minimal amount of effort, and to provide a system that would give exactly the same results on all computers, at any point in time.[2] TeX is a popular means by which to typeset complex mathematical formulae; it has been noted as one of the most sophisticated digital typographical systems in the world.[3] TeX is popular in academia, especially in mathematics, computer science, economics, engineering, physics, statistics, and quantitative psychology. It has largely displaced Unix troff, the other favored formatter, in many Unix installations, which use both for different purposes.

LaTeX LaTeX (/ˈlɑːtɛx/ LAH-tekh or /ˈleɪtɛx/ LAY-tekh[1] styled as LaTeX, and a shortening of Lamport TeX) is a word processor and document markup language. It is distinguished from typical word processors such as Microsoft Office and LibreOffice in that the writer uses plain text as opposed to formatted text, relying on markup tagging conventions to define the general structure of a document (such as article, book, and letter), to stylise text throughout a document (such as bold and italic), and to add citations and cross-referencing. A TeX distribution such as TeXlive or MikTeX is used to produce an output file (such as PDF or DVI) suitable for printing or digital distribution. LaTeX is widely used in academia.[3][not in citation given][4] LaTeX can be used as a standalone document preparation system, or as an intermediate format. In the latter role, for example, it is often used as part of a pipeline for translating DocBook and other XML-based formats to PDF.

Multi Digit Multiplication Strategies - Mr Elementary Math Look at the problem below and think about how your students would respond to the two questions: What is the value of the 2?Why should we place a 0 in this space? If your students answer the questions by saying, “the 2 is worth 2,” or “I placed the 0 in that area because I was always told to move it down,” consider the idea that the student(s) do not fully understand the concept of multiplying multi digit numbers.

Manual of Style (linking) Linking through hyperlinks is an important feature of Wikipedia. Internal links are used to bind the project together into an interconnected whole. Interwiki links bind the project to sister projects such as Wikisource, Wiktionary, and Wikipedia in other languages; and external links bind Wikipedia to the World Wide Web. Appropriate links provide instant pathways to locations within and outside the project that are likely to increase readers' understanding of the topic at hand. When writing or editing an article, it is important to consider not only what to put in the article, but what links to include to help the reader find related information, as well as which other pages should carry links to the article. Care should be taken to avoid both underlinking and overlinking, as described below.

sans titre ImageMeter provides tools that help you measure lengths, angles and areas in your photos. Instead of drawing sketches by hand, simply take a photo and annotate it with the dimensions on your phone or tablet. ImageMeter has the broadest support for Bluetooth laser distance measurement devices. Most devices from various manufacturers are supported (see below for full list of devices). What is also special about ImageMeter is that it enables you to measure within the image once you calibrated it with a reference object of known size. It often happens that after taking the photo, being back at home or in the office, one realizes that some important distances have not been measured. The Beauty of Mathematics: A Visual Demonstration of Math in Everyday Life This lovely video short from Yann Pineill and Nicolas Lefaucheux of Paris video production agency Parachutes succinctly demonstrates the underlying mathematics behind everyday occurrences in the format of a triptych. On the left we see the mathematical equation, in the middle a mathematical model, and on the right a video of such things as snowflakes, wind, sound, trees and magnetism. The video begins with the following quote: “Mathematics, rightly viewed, possesses not only truth, but supreme beauty — a beauty cold and austere, without the gorgeous trappings of painting or music.” —Bertrand Russell Best viewed full screen.

The life and numbers of Fibonacci Fibonacci is one of the most famous names in mathematics. This would come as a surprise to Leonardo Pisano, the mathematician we now know by that name. And he might have been equally surprised that he has been immortalised in the famous sequence – 0, 1, 1, 2, 3, 5, 8, 13, ... – rather than for what is considered his far greater mathematical achievement – helping to popularise our modern number system in the Latin-speaking world. Canadian Journal of Sociology The Canadian Journal of Sociology publishes rigorously peer-reviewed research articles and innovative theoretical essays by social scientists from around the world, providing insight into the issues facing Canadian society as well as social and cultural systems in other countries. The journal also features a lively debate/commentary section encouraging the intensive exchange of ideas, along with regular sections such as “Notes on Society” that address topical issues of the day from a social science point of view and “Notes on the Discipline” designed to discuss a variety of issues encountered in the course of the sociological analysis of modern society. Each issue of the journal also has a comprehensive book review section.